Edith Nesbit (married name Edith Bland) (August 15, 1858 - May 4, 1924) was an English author and poet. She is most famous for her children's stories, which she published under the androgynous name of E. Nesbit. She wrote or collaborated on over 60 books of fiction for children, several of which have been adapted for film and television.

Her modern and realistic approach to the genre has been noted as a heavy influence for contemporary children's fiction. Nesbit was also a political activist and co-founded the Fabian Society, a precursor to the modern Labour Party. Her socialist views became a common theme in her stories.

Edith Nesbit was born in 1858 Kennington, Surrey (now part of Greater London). Her father, John Collis Nesbit, was an agricultural chemist, who died before her fourth birthday in 1862.

Nesbit and her family moved around constantly during her childhood, due to her sister Mary's poor health. They lived in Brighton and Buckinghamshire, before staying in various French cities—Dieppe, Rouen, Paris, Tours, Poitiers, Angouleme, Bordeaux, Arcachon, Pau, Bagneres de Bigorre, and Dinan in Brittany. They also lived in Spain and Germany, before settling for three years at Halstead Hall in Halstead in northwest Kent, a location which later inspired The Railway Children (this distinction has also been claimed by the Derbyshire town of New Mills).[1]

The young Nesbit was a tomboy who generally disliked the many schools she attended. Early on, though, she developed a passion for writing stories and poems, eventually having some of her verses published by age 15. When Nesbit was 17, the family returned to London, living variously in South East London at Eltham, Lewisham, Grove Park and Lee.

At age 19, Nesbit met bank clerk Hubert Bland. On April 22, 1880, when she and Bland married she was already seven months pregnant with their first son Paul. Soon after, Bland was stricken with smallpox, and Nesbit had to take care of both her ill husband and eventually also their infant son. As the breadwinner of the household, Nesbit relied on earnings from her writings to support the young family. Once Bland regained his health, he turned to writing as well, though as a political journalist, he never matched the widespread success of his wife.

The marriage between Nesbit and Bland was unconventional and would today be characterized as an open marriage. Bland continued an affair with Alice Hoatson, which resulted in two children—Rosamund in 1886 and John in 1899—both of whom Nesbit raised as her own. Nesbit had three of her own children—Paul (1880), to whom The Railway Children was dedicated; Iris Bland (1881); and Fabian Bland (1885, who died aged 15 after a tonsil operation, and to whom she dedicated Five Children And It and its sequels, as well as The Story of the Treasure Seekers and its sequels.

Nesbit and Bland were both socialists, and in 1884 they helped found the Fabian Society, a precursor to the Labour Party. They also jointly edited the Society's journal Today, while Hoatson was the Society's assistant secretary. Nesbit was involved in many of the radical social causes of her time, with both herself and Bland participating briefly with the Social Democratic Federation, before rejecting it as too radical. Nesbit was an active lecturer and prolific writer on socialism during the 1880s. She also wrote with her husband under the name Fabian Bland,[2] but her career as children's author began to dominate her time.

On February 20, 1917, some three years after Bland's death, Nesbit married Thomas "the Skipper" Tucker, a ship's engineer on the Woolwich Ferry.

Towards the end of her life she moved to a house called Crowlink in Friston, East Sussex, and later to St Mary's Bay in Romney Marsh, East Kent. A heavy smoker, Nesbit suffered from lung cancer, and she died in 1924 at New Romney, Kent. She was buried in the churchyard of St Mary in the Marsh.

Nesbit published approximately 40 books for children, both novels and collections of stories. She also published collaborations with other authors.

Nesbit first found success with her stories about the Bastable children. The stories first appeared in the Pall Mall magazine before being reprinted in book form, as The Story of the Treasure Seekers in 1899. The instant popularity of the Bastables and their adventures spurred two sequels, The Wouldbegoods in 1901 and The New Treasure Seekers in 1904. These stories, told through the perspective of Oswald Bastable, were decidedly modern, in stark contrast to the Victorian tales typically available to children.

In 1902, Nesbit wrote her next prominent book, Five Children and It. In it, Nesbit reversed the trend of Victorian tales, which began in the real world and shifted into a magical world; here she introduced fantasy into real world London itself. This book became the first of yet another series featuring the five children—The Phoenix and the Carpet was published in 1904, followed by The Story of the Amulet in 1906. In her children’s books up to this point, Nesbit’s political ideologies were perhaps most present in The Story of the Amulet, in which she highlighted the deplorable conditions suffered by the poor. Later the children travel to the future, via the magical Amulet, where they glimpse Nesbit’s vision of Utopia—a clean and beautiful England, with equal opportunities for its citizens.

Nesbit followed Amulet with The Railway Children, her most popular and enduring work. In The Railway Children, Nesbit moved away from the fantasy genre of her previous series and focused on realism, underscoring the problems suffered by her juvenile protagonists. The children must confront the social repercussions of having a father in prison, albeit wrongfully accused.

Nesbit also wrote for adult audiences, publishing several collections of poems and short fiction, often based on her life experiences. She and her husband also co-authored eight novels, including The Prophet's Mantle (1885), which was inspired by the London residence of anarchist Peter Kropotkin. 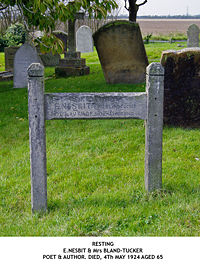 Nesbit's hallmark was her fresh approach to juvenile fiction, which strayed from the tradition of moralistic Victorian tales and instead provided an endearingly honest, and often unsentimental, voice to children. According to her biographer Julia Briggs, Nesbit was the "first modern writer for children." Briggs notes that, "Nesbit helped to reverse the great tradition of children's literature inaugurated by Lewis Carroll, George Macdonald and Kenneth Grahame, in turning away from their secondary worlds to the tough truths to be won from encounters with things-as-they-are, previously the province of adult novels." Briggs also credits Nesbit with having invented the children's adventure story.

Nesbit also popularized an innovative style of children's fantasy that combined realistic, contemporary children in real-world settings with magical objects and adventures. In doing so, she was a direct or indirect influence on many subsequent writers, including P. L. Travers (author of Mary Poppins), Edward Eager, Diana Wynne Jones and J. K. Rowling. C. S. Lewis wrote of her influence on his The Chronicles of Narnia[3] series and mentions the Bastable children in The Magician's Nephew. Michael Moorcock would go on to write a series of steampunk novels with an adult Oswald Bastable (of The Treasure Seekers) as the lead character.

Retrieved from https://www.newworldencyclopedia.org/p/index.php?title=E._Nesbit&oldid=1095980
Categories:
Hidden category:
This page was last edited on 16 January 2023, at 01:18.
Content is available under Creative Commons Attribution/Share-Alike License; additional terms may apply. See Terms of Use for details.