Dorothy Johnson Vaughan (September 20, 1910 – November 10, 2008) was an American mathematician and human computer who worked for the National Advisory Committee for Aeronautics (NACA), and NASA, at Langley Research Center in Hampton, Virginia. In 1949, she became acting supervisor of the West Area Computers, the first African-American woman to supervise a group of staff at the center.

She later was promoted officially to the position. During her 28-year career, Vaughan prepared for the introduction of machine computers in the early 1960s by teaching herself and her staff the programming language of Fortran. She later headed the programming section of the Analysis and Computation Division (ACD) at Langley.

Vaughan is one of the women featured in Margot Lee Shetterly's history Hidden Figures: The Story of the African-American Women Who Helped Win the Space Race (2016), adapted as a biographical film of the same name. Her legacy lies not just in her work in mathematics in support of the space program for which she achieved the highest honors, but in breaking barriers of race and gender in her field. The achievements of many later minority women rest on her shoulders.

Dorothy Jean Johnson was born September 20, 1910, in Kansas City, Missouri,[1] the daughter of Annie and Leonard Johnson.[2] Her family moved to Morgantown, West Virginia, where she graduated from Beechurst High School in 1925 as her class valedictorian.[3] Vaughan received a full-tuition scholarship from West Virginia Conference of the A.M.E. Sunday School Convention[4] to attend Wilberforce University in Wilberforce, Ohio. She joined the Alpha Kappa Alpha chapter at Wilberforce[5] and graduated in 1929 with a B.A. in mathematics.[6]

In 1932, she married Howard Vaughan. The couple moved to Newport News, Virginia, where they had six children: Ann, Maida, Leonard, Kenneth, Michael, and Donald.[7] The family also lived with Howard's wealthy and respected parents and grandparents on South Main Street in Newport News, Virginia. Dorothy was an active member of the African Methodist Episcopal Church, where she participated in music and missionary activities. She was very devoted to family and the church, although her talent and love for mathematics also guided her early career choices. In fact, she wrote a song called "Math Math."[8]

Although encouraged by professors to do graduate study at Howard University,[4] she worked as a mathematics teacher at Robert Russa Moton High School in Farmville, Virginia, in order to assist her family during the Great Depression.[3] During the 14 years of her teaching career, Virginia's public schools and other facilities were still racially segregated under Jim Crow laws.[8]

In 1943 she began working at the Langley Memorial Aeronautical Laboratory thinking that it would be a temporary war job. She lived in Newport News, Virginia, and commuted to work at Hampton via public transportation. During this period Vaughan raised her six children, one of whom later worked at NASA.[6].

Dorothy Vaughan died on November 10, 2008, aged 98. At the time of her death she was survived by four of her six children (Michael and Donald predeceased her), ten grandchildren, and fourteen great-grandchildren.[2]

In 1943, Vaughan began a 28-year-career as a mathematician and programmer at Langley Research Center, in which she specialized in calculations for flight paths, the Scout Project, and FORTRAN computer programming. Her career thus began at the height of World War II.

In 1941, President Franklin D. Roosevelt issued Executive Order 8802, to desegregate the defense industry, and Executive Order 9346 to end racial segregation and discrimination in hiring and promotion among federal agencies and defense contractors.[8] These helped ensure the war effort drew from all of American society after the United States entered World War II in 1942. With the enactment of the two Executive Orders, and with many men being swept into service, federal agencies such as the National Advisory Committee for Aeronautics (NACA) also expanded their hiring and increased recruiting of women, including women of color, to support war production of airplanes.[4] Two years following the issuance of Executive Orders 8802 and 9346, the Langley Memorial Aeronautical Laboratory (Langley Research Center), a facility of the NACA, began hiring more black women to meet the drastic increase in demand for processing aeronautical research data.[1] The US believed that the war was going to be won in the air. It had already ramped up airplane production, creating a great demand for engineers, mathematicians, craftsmen, and skilled tradesmen. 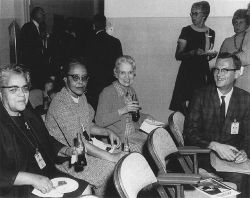 Vaughan with her human computer colleagues Lessie Hunter, and Vivian Adair. Margaret Ridenhour and Charlotte Craidon are standing in the back.

In 1943, Vaughan began work for NACA which, in 1935, had established a section of women mathematicians at the Langley Research Center in Hampton, Virginia.[4] Vaughan was assigned to the West Area Computing, a segregated unit, which consisted of only African Americans. This was due to prevailing Jim Crow laws that required the newly hired African American women to work separately from their Caucasian women counterparts. They were also required to use separate dining and bathroom facilities.[1] This segregated group of African-American women made complex mathematical calculations by hand using the tools of the time, namely slide rules and simple calculators.[4][9]

The West Computers, eventually, made contributions to every area of research at Langley. Their work expanded in the postwar years to support research and design for the United States' space program, which was emphasized under President John F. Kennedy. In 1949, Vaughan was assigned as the acting head of the West Area Computers, taking over from a white woman who had died. She was the first black supervisor at NACA and one of few female supervisors. She served for years in an acting role before being promoted officially to the position as supervisor.[3] Vaughan supported opportunities for the women in West Computing as well as women in other departments. In this way, she spoke up on behalf of both black and white computers who deserved promotions or pay raises, recommending the best "girls" for a particular project regardless of race.[9]

Vaughan continued after NASA, the successor agency, was established in 1958. When NACA became NASA, segregated facilities, including the West Computing office, were abolished.

Seeing that machine computers were going to be the future, Vaughan became proficient in computer programming, teaching herself FORTRAN and teaching it to her coworkers to prepare them for the transition. Mathematician Katherine Johnson was initially assigned to Vaughan's group, before being transferred to Langley's Flight Mechanics Division. Vaughan moved into the area of electronic computing in 1961, after the first digital (non-human) computers were introduced. She contributed to the space program through her work on the Scout Launch Vehicle Program.[9]

Vaughan continued working in the Numerical Techniques division through the 1960s. She and many of the former West Computers joined the new Analysis and Computation Division (ACD), a racially and gender-integrated group on the frontier of electronic computing.

In a 1994 interview, Vaughan recalled that working at Langley during the Space Race felt like being on "the cutting edge of something very exciting."[10] Regarding being an African American woman during that time, she remarked, "I changed what I could, and what I couldn't, I endured."[3]

Vaughan is one of the women featured in Margot Lee Shetterly's 2016 non-fiction book Hidden Figures, and the feature film of the same name, which recounts the stories of Vaughan (played by Octavia Spencer), Katherine Johnson, and Mary Jackson. In the film, the three women calculated flight trajectories for Project Mercury and Apollo 11 in the 1960s.[7] Against racist and discriminatory acts, Dorothy Vaughan, Katherine Johnson, Mary Jackson, and the other "computers," used their intellectual prowess and expertise to assist astronauts and command centers with the completion of challenging mathematical and aeronautical science problems.

In 2019, Vaughan, along with other "computers," was awarded the Congressional Gold Medal.[11] Also in 2019, Vaughan crater on the far side of the Moon was named in her honor.

Retrieved from https://www.newworldencyclopedia.org/p/index.php?title=Dorothy_Vaughan&oldid=1040696
Categories:
Hidden category:
This page was last edited on 13 August 2020, at 21:06.
Content is available under Creative Commons Attribution/Share-Alike License; additional terms may apply. See Terms of Use for details.