Mary Jackson (née Winston, April 9, 1921 – February 11, 2005) was an American mathematician and aerospace engineer at the National Advisory Committee for Aeronautics (NACA), which in 1958 was succeeded by the National Aeronautics and Space Administration (NASA). She worked at Langley Research Center in Hampton, Virginia, for most of her career, starting as a "human computer" at the segregated West Area Computing division in 1951. She took advanced engineering classes and became NASA's first black female engineer.

After 34 years as a NASA engineer, she become manager of both the Federal Women's Program Manager in the Office of Equal Opportunity Programs and the Affirmative Action Program Manager. In this role, she worked to influence the hiring and promotion of women in NASA's science, engineering, and mathematics careers.

Jackson is one of the three protagonists in Hidden Figures, the film adaptation of Margot Lee Shetterly's history of the influential African-American women mathematicians and engineers at NASA in the mid-twentieth century. Her legacy lies not just in her work as an aerospace engineer, but in breaking barriers of race and gender in her field, and in encouraging minority young people to fulfill their potential, particularly in the STEM fields.

Mary Eliza Winston was born on April 9, 1921, to Ella Winston (née Scott) and Frank Winston.[1] She grew up in Hampton, Virginia, where in 1937 she graduated from the all-black George P. Phenix Training School with highest honors.[2]

Mary earned dual bachelor's degrees in mathematics and physical science from Hampton University in 1942.[3][4] She was a member of the Alpha Kappa Alpha.[3]

After graduation, she taught mathematics for a year at an African-American school in Calvert County, Maryland.[2] At that time, public schools were still segregated across the South. She also began tutoring high school and college students, which she continued to do throughout her life.[5]

By 1943, she had returned to Hampton, where she became a bookkeeper at the National Catholic Community Center there. On November 18, 1944 Mary was married to Levi Jackson, Sr., a sailor in the U.S. Navy.[4][6] She continued working as a receptionist and clerk at the Hampton Institute's Health Department until she became pregnant and eventually returned home for the birth of her son, Levi Jackson, Jr. They later had a daughter, Carolyn Marie Lewis.[4]

Jackson served for more than 30 years as a Girl Scout leader.[2] She was noted in the 1970s for helping African American children in her community create a miniature wind tunnel for testing airplanes.[4][7] 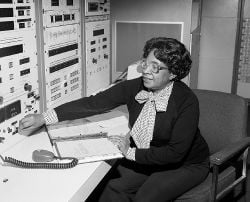 Jackson working at a control panel 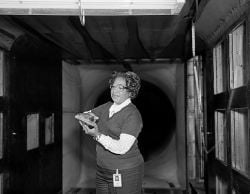 Jackson holding a model in the wind tunnel

In 1951, Jackson became a clerk at the Office of the Chief Army Field Forces at Fort Monroe.[5] From there she was recruited by the National Advisory Committee for Aeronautics (NACA), which in 1958 was succeeded by the National Aeronautics and Space Administration (NASA).[4][7] She started as a research mathematician, or "human computer," at the Langley Research Center in her hometown of Hampton, Virginia. She worked under Dorothy Vaughan in the segregated West Area Computing Section.[2]

In 1953, she accepted an offer to work for engineer Kazimierz Czarnecki in the Supersonic Pressure Tunnel. This 4 feet (1.2 m) by 4 feet (1.2 m), 60,000 horsepower (45,000 kW) wind tunnel was used to study forces on a model by generating winds at almost twice the speed of sound.[2] Czarnecki encouraged Jackson to undergo training so that she could be promoted to an engineer. To qualify for the job, she needed to take graduate-level courses in mathematics and physics which were offered in a night program by the University of Virginia, held at the all-white Hampton High School. Jackson successfully petitioned the City of Hampton to allow her to attend the classes. After completing the courses, she was promoted to aerospace engineer in 1958, and became NASA's first black female engineer.[7] She analyzed data from wind tunnel experiments and real-world aircraft flight experiments at the Theoretical Aerodynamics Branch of the Subsonic-Transonic Aerodynamics Division at Langley. Her goal was to understand air flow, including thrust and drag forces, in order to improve United States planes.[4] 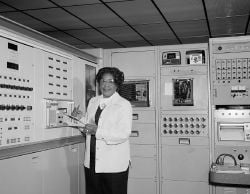 Jackson worked as an engineer in several NASA divisions: the Compressibility Research Division, Full-Scale Research Division, High-Speed Aerodynamics Division, and the Subsonic-Transonic Aerodynamics Division.[5] She ultimately authored or co-authored 12 technical papers for NACA and NASA.[5] During this time she helped women and other minorities to advance their careers, including advising them how to study in order to qualify for promotions.[8]

By 1979, Jackson had achieved the most senior title within the engineering department. She decided to take a demotion in order to serve as an administrator in the Equal Opportunity Specialist field. After undergoing training at NASA Headquarters, she returned to Langley where she worked to make changes and highlight women and other minorities who were accomplished in the field. She served as both the Federal Women's Program Manager in the Office of Equal Opportunity Programs and as the Affirmative Action Program Manager, influencing the career paths of women in science, engineering, and mathematics positions at NASA.[2][8] She continued to work at NASA until her retirement in 1985. 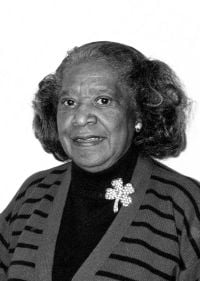 The 2016 film Hidden Figures recounts the NASA careers of Jackson, Katherine Johnson, and Dorothy Vaughan, specifically their work on Project Mercury during the Space Race. The film is based on the book of the same name by Margot Lee Shetterly, a history of the African-American women who contributed so significantly to the work of NASA. Jackson is portrayed in the film by Janelle Monáe.[9]

Jackson was outstanding not only in the field of aerospace engineering, but she was dedicated to helping others and improving their lives, especially those of African-American women. Her spirit and character were well represented by a Langley research profiler as “gentle lady, wife and mother, humanitarian and scientist.”[2] For Mary Jackson, science and service went hand in hand. In the 1970s, she helped young people in the science club at her local community center to build their own wind tunnel and use it to conduct experiments:

“We have to do something like this to get them interested in science," she said in an article for the local newspaper. "Sometimes they are not aware of the number of black scientists, and don't even know of the career opportunities until it is too late."[2]

In 2018, the Salt Lake City School Board voted that Jackson Elementary School in Salt Lake City would from then on be officially named after Mary Jackson rather than (as it used to be) after President Andrew Jackson.[10]

In 2019, Jackson was posthumously awarded the Congressional Gold Medal, along with others featured in Hidden Figures.[11]

On June 24, 2020, NASA Administrator Jim Bridenstine announced that the agency’s headquarters building in Washington, D.C. would be named after Mary W. Jackson and referred to as the Mary W. Jackson NASA Headquarters.[12]

Retrieved from https://www.newworldencyclopedia.org/p/index.php?title=Mary_Jackson_(engineer)&oldid=1086191
Categories:
Hidden category:
This page was last edited on 7 November 2022, at 16:06.
Content is available under Creative Commons Attribution/Share-Alike License; additional terms may apply. See Terms of Use for details.