Dambulla Cave Temple (also known as the Golden Temple of Dambulla) is located in the central part of in Sri Lanka.[1] The site is located 148 kilometers (92 mi) east of Colombo and 72 kilometers (45 mi) north of Kandy. The largest and best-preserved cave temple complex in Sri Lanka, the rock from which the caves were carved towers 160 meters (520 ft) over the surrounding plains. More than eighty caves have been discovered and documented in the area. Major attractions are spread over five caves which contain statues and paintings of Lord Buddha and his life. A total of 153 Buddha statues, three statues of Sri Lankan kings and four statues of gods and goddesses also stand in the site. The latter include statues of the Hindu deities, Vishnu and Ganesh. The murals found there cover an area of 2,100 square meters (22604 sq ft). Depictions on the walls of the caves include Buddha's temptation by Mara and Buddha's first sermon. UNESCO designated the Golden Temple of Dambulla a World Heritage Site in 1991.[1]

Sri Lanka has a long history of the presence and practice of Buddhism. The Dambulla cave temple represents one of the oldest sites for Buddhist monasticism, with a history as a pilgrimage site for twenty-two centuries. The massive cave temple complex is unique in Southeast Asia because monks carved the caves out from rock. The cave temples in India, such as Ajanta, Elephanta, Ellore and Karla, have been created in natural caves.[2] The cave monastery has been a sacred pilgrimage site since its founding. It has five sanctuaries, including the Cave of the Divine King, Cave of the Great Kings, Great New Monastery, and two lesser caves of more recent creation. The caves, in continuous use for more than two millenniums, have been developed in stages. The centuries' long effort to maintain the cave temples demonstrates constant and continual adherence to Buddhism in Sri Lanka. 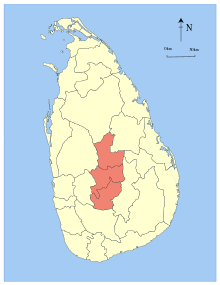 Dating back to the first century B.C.E., the Dambulla Cave Temple represents the most impressive cave temple in Sri Lanka. It has five caves under a vast overhanging rock, carved with a drip line to keep the interiors dry. In 1938 craftsman embellished the architecture with arched colonnades and gabled entrances. Inside the caves, the ceilings had been painted with intricate images of the Lord Buddha and Bodhisattvas, as well as various gods and goddesses following the contours of the rock.

The Dambulla cave still operates as a monastery and remains the best-preserved ancient edifice in Sri Lanka. The complex dates from the third and second centuries B.C.E., serving as one of the largest and most important monasteries. King Valagambahu has been traditionally believed to have converted the caves into a temple in the first century B.C.E. The caves in the city provided refuge to King Valagamba (also called Vattagamini Abhaya) in his fourteen year long exile from the Anuradapura kingdom. Buddhist monks meditating in the caves of Dambulla at that time provided the exiled king protection from his enemies. When King Valagamba returned to the throne at Anuradapura kingdom in the first century B.C.E., he had a magnificent rock temple built at Dambulla as a gratitude to the monks in Dambulla.

Many other kings added to it later and by the eleventh century, the caves had become a major religious center. King Nissanka Malla gilded the caves and added about seventy Buddha statues in 1190 C.E. During the eighteenth century, the Kandyan Kings restored and painted the caves. 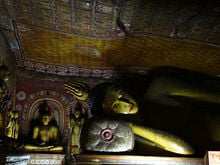 A Buddha statue in Dambulla cave

Five caves converted into shrine rooms make up the temple. The caves, built at the base of a 150 meter high rock during the Anuradhapura (first century B.C.E. to 993 C.E.) and Polonnaruwa periods (1073 to 1250), represent by far the most impressive of the many cave temples found in Sri Lanka. Devotees and visitors access the caves along the gentle slope of the Dambulla Rock, offering a panoramic view of the surrounding flat lands, which includes the rock fortress Sigiriya, nineteen kilometers away. Dusk brings hundreds of swooping swallows to the cave entrance. The largest cave measures about fifty two meters from east to west, twenty three meters from the entrance to the back, and seven meters tall at its highest point.[3] Hindu deities also have representation, as well as the kings Valgamba and Nissankamalla, and Ananda, Buddha's most devoted disciple.

Cave of the Divine King

The first cave, called Devaraja lena (lena in sinhalese means "cave"), or "Cave of the Divine King," has an account of the founding of the monastery recorded in a first century Brahmi inscription over the entrance of the cave. The cave, dominated by a fourteen meter statue of the Buddha, has been hewn out of the rock. It has been repainted countless times in the course of its history, and probably received its last coat of paint in the twentieth century. At his feet sits Buddha's favorite pupil, Ananda. At his head stands Vishnu, said to have used his divine powers to create the caves.

Cave of the Great Kings 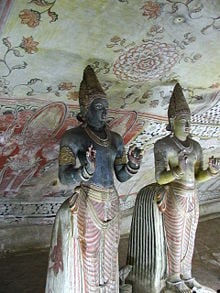 In the second and largest cave, in addition to sixteen standing and forty seated statues of Buddha, stand the gods Saman and Vishnu which pilgrims often decorate with garlands. The statues of King Vattagamani and King Nissanka Malla also stand in the cave. King Vattagamani, for honoring the monastery in the first century B.C.E., and King Nissanka Malla, for gilding of fifty statues in the twelfth century as indicated by a stone inscription near the monastery entrance.[4] The cave fittingly has been named Maharaja lena, "Cave of the Great Kings."

Wooden figures of the Bodhisattvas Maitreya and Avalokiteshvara or Natha escort the Buddha statue hewn out of the rock on the left side of the room. A spring, said to have healing powers, drips out of a crack in the ceiling. Valuable tempera paintings on the cave ceiling dating from the eighteenth century depict scenes from Buddha's life, from the dream of Mahamaya to temptation by the demon Mara. Further pictures relate important events from the country's history.

The third cave, the Maha Alut Vihara, the "Great New Monastery," received ceiling and wall paintings in the typical Kandy style during the reign of King Kirti Sri Rajasinha (1747-1782), the famous Buddhist revivalist. In addition to the fifty Buddha statues, a statue of the king stands in the cave.

The smaller fourth and fifth caves date from a later period. The painting and sculptures display inferior craftsmanship. A small Vishnu Devale, between the first and second caves, attracts many worshipers.

Within the shrine rooms reside a collection of one hundred and fifty statues of the Buddhist Order and the country's history. The statues and paintings represent many epochs of Sinhala sculpture and Sinhala art. The Buddha statues vary in size and attitude, with the largest fifteen meters long. One cave has over 1,500 paintings of Buddha covering the ceiling.

Time line of the Caves 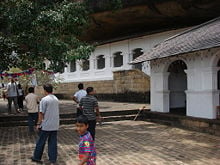 Dambulla Rock Temple from outside

Major attractions of the city of Dambulla, in addition to the largest and best preserved cave temple complex of Sri Lanka, include the Rangiri Dambulla International Stadium, famous for being built in 167 days. The city also boasts the largest rose quartz mountain range in South Asia, and the Iron wood forest, or Namal Uyana.

Ibbankatuwa prehistoric burial site near Dhambulla cave temple complexes represents the latest archaeological site of significant historical importance found in Dambulla. Located within three kilometers of the cave temples, they provide evidence of the presence of indigenous civilizations long before the arrival of Indian influence on the Island nation.[5] Evidence of human habitation exists from as early as the seventh to the third century B.C.E.[6] Statues and paintings in those caves date to the first century B.C.E. The paintings and statues had been repaired and repainted in the eleventh, twelfth, and eighteenth centuries C.E.

Retrieved from https://www.newworldencyclopedia.org/p/index.php?title=Dambulla_cave_temple&oldid=1071169
Categories:
Hidden category:
This page was last edited on 24 June 2022, at 00:17.
Content is available under Creative Commons Attribution/Share-Alike License; additional terms may apply. See Terms of Use for details.