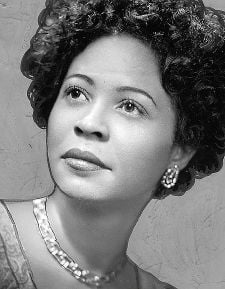 Daisy Lee Gatson Bates (November 11, 1914 – November 4, 1999) was an American civil rights leader, journalist, publisher, and author. Born in Arkansas, she became well-known for her work as a journalist in her husband's newspaper, reporting instances of racism in the community. She was active with the NAACP, working tirelessly for civil rights. Daisy Bates is most famous for her work with the "Little Rock Nine"—the first nine black students to enroll in Little Rock High School and end racial segregation there. Although she experienced the evils of racism first-hand, Daisy Bates was able to overcome hatred for white people, and work toward a better society in which people of all colors and faiths would live together in peace.

Daisy Lee Gatson Bates was born on November 11, 1914 at Huttig, Arkansas. Huttig was referred to as a "plantation town," as most people in town made a living at the sawmill, rented houses owned by the mill, and even bought their food from mill-owned stores.

When Daisy was a baby her mother, Sarah Gatson, was killed while resisting three local white men who were attempting to rape her. They brutally attacked and killed her, throwing her body into a nearby pond. Her father, Hezakiah Gatson, was forced to leave shortly after her mother's death, because he feared reprisals from angry whites who did not want him to prosecute the suspects. No-one was ever prosecuted for the crime.

Daisy was raised by friends of the family, Orlee and Susie Smith, who adopted her. They were kind and loving parents and gave Daisy a strong beginning in her life. It was not until later that she learned the Smiths were not her birth parents. When she realized that her mother had been killed in such a tragic way, Daisy secretly vowed to vindicate her mother's death, and harbored much hatred toward white people. Daisy experienced prejudice personally at age seven when attempting to buy meat. The butcher unfairly waited on all the white customers first and then said, "Niggers have to wait for white folks."

Daisy's adoptive father disapproved of her hatred towards whites, and at his bedside, shortly before his death, he spoke these words to her:

Hate can destroy you. Don't hate white people just because they're white. If you hate, make it count for something. Hate the humiliations we are living under in the South. Hate the discrimination that eats away at the soul of every black man and woman. Hate the insults hurled at us by white scum—and then try to do something about it, or your hate won't spell a thing.[1]

He had passed on to me a priceless heritage—one that was to sustain me throughout the years to come. I've never forgotten that incident. I decided I would do what I could to help my race.

When Daisy was only 15 years old, she fell in love with an insurance salesman named Lucius Christopher (L.C.) Bates. They were married later in Fordyce, Arkansas and moved to Little Rock.

Daisy's husband held a desire to start a newspaper and eventually, he took the opportunity to do so. Daisy and L.C. started the Arkansas State Press, renting space at a local church. On May 9, 1941, they printed their first issue. Although she rarely wrote for the paper, Daisy gradually became active in its operations and was named by her husband as city editor in 1945.

The Arkansas State Press was a channel for many persecuted people to have their stories told. These included many black soldiers who, even though they fought for their country during World War II, were ridiculed and even sometimes tortured when they returned home. The Arkansas State Press also publicized violations of the U.S. Supreme Court's desegregation rulings.

In 1952, Daisy Bates was elected president of the Arkansas State Conference of the National Association for the Advancement of Colored People (NAACP). Although well known in the black community, Bates came to the attention of white Arkansans as a civil rights advocate in 1956 during the pre-trial proceedings of the federal court case, Aaron v. Cooper, which set the stage for the 1957 desegregation of Little Rock Central High School.

In 1957, Daisy and her husband L.C. Bates became important figures in the Little Rock Integration Crisis. Following the 1954 U.S. Supreme Court's Brown v. Board of Education ruling calling for desegregation in all schools, Virgil Blossom, the superintendent of schools in Little Rock, submitted a plan of gradual integration which the school board unanimously approved on May 24, 1955. By 1957, the NAACP had registered nine black students, aged 14-16, to attend the previously all-white Little Rock Central High School.[2]

This provoked a confrontation with Arkansas Governor Orval Faubus, who called out the National Guard to prevent the students from enrolling, despite President Dwight D. Eisenhower's warning not to interfere with the Supreme Court's ruling.

On their first day of school, September 23, l957, the police quietly brought the students into the school. Mobs of angry white students, photographers, and reporters were gathered outside the school. When the protesters learned that the nine black students were inside, they began confronting the outnumbered line of policemen, who then took the students home. The next day President Eisenhower deployed paratroopers of the U.S. Army to escort the students to school. The paratroopers remained at the school for the rest of the school year.

Daisy Bates guided and advised the nine students, known as the "Little Rock Nine," continuing as their advocate throughout their time at the school. Although she never had any children of her own, she cared about these children as her own. Ernest Green was the first black student to graduate of the "nine" among 601 students.

Daisy's involvement in the Little Rock Crisis resulted in the loss of much advertising revenue to their newspaper. Public sentiment was agitated to such a degree that business with the paper dropped off. Closure of the Arkansas State Press in 1959 was unavoidable. The following year, the Bates couple moved to New York City and Daisy worked on her memoirs. They were published in 1962 with a foreword by former first lady Eleanor Roosevelt: "This is a book which I hope will be read by every American," adding that the volume "should shock the conscience of America and bring a realization of where we stand in the year 1962 in these United States."[3]

Their next move was to Washington, D.C. where Daisy worked for the Democratic National Committee. She served in the administration of President Lyndon Baines Johnson on anti-poverty programs, speaking across the country. Her prominence as one of the few female civil rights leaders of the period was recognized by her selection as the only female to speak at the Lincoln Memorial at the March on Washington on August 28, 1963.

In 1965, she suffered a stroke and returned to Little Rock. The stroke left her confined to a wheelchair; however it did not stop her relentless work for civil liberties.

In 1968, she moved into a mobile home in a rural black community of Mitchellville, Arkansas. There, she concentrated on improving the lives of her neighbors by establishing a self-help program which was responsible for new sewer systems, paved streets, a water system, and community center. Her husband remained in Little Rock during this time and Daisy commuted between cities to be with him until he died in 1980.

in 1996, in her wheelchair, Daisy Bates carried the Olympic torch through the streets of Atlanta, Georgia.[4] The city's newspaper reported that she was met by a "mob scene," albeit one very different from those she had described in her harrowing book: "Friends, family and admirers, black and white, cheered, yelled encouragement and shed tears."[5]

Daisy Bates died in Little Rock, Arkansas on November 4, 1999, of a heart attack. She was 84 years old. She is buried in Haven of Rest Cemetery in Little Rock. [6]

In May 2000, a crowd of more than 2,000 gathered in Robinson Auditorium in Little Rock to honor her memory. At this event, President Bill Clinton acknowledged her achievements, comparing her to a diamond that gets “chipped away in form and shines more brightly.” In 2001, the Arkansas legislature enacted a provision that recognizes the third Monday in February as “Daisy Gatson Bates Day.” Thus, her memory (along with those of American presidents) is celebrated on that date as an official state holiday. There are streets in various towns in Arkansas, including Little Rock, which bear her name.

The Bates' home at 1207 West 28th St, Little Rock, is now a National Historic Landmark.[7] Their house was used as a command post for the "Little Rock Nine" incident. This was the first time that the President used federal powers to uphold and implement a federal court decision regarding school desegregation. The house had rocks thrown through the windows, bombs planted outside and even a cross burned on its lawn by the Ku Klux Klan. It was a battleground for civil rights.

2007 marked the 50th Anniversary of the integration of Central High School. The theme of the NAACP's 7th Biennial Daisy Bates Education Summit that year was "Little Rock Central High l957: Honoring the Legacy, Facing the Challenge."

Retrieved from https://www.newworldencyclopedia.org/p/index.php?title=Daisy_Bates&oldid=1071158
Categories:
Hidden category:
This page was last edited on 24 June 2022, at 00:07.
Content is available under Creative Commons Attribution/Share-Alike License; additional terms may apply. See Terms of Use for details.