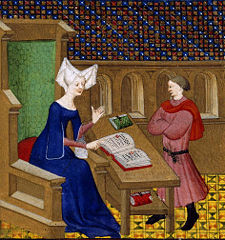 Christine de Pizan (also seen as de Pisan) (1364 – 1430) was a writer and analyst of the Medieval era, who strongly challenged the clerical misogyny and stereotypes that were prevalent in the male-dominated realm of the arts. Certain scholars have argued that she should be seen as an early feminist who efficiently used language to convey that women could play an important role within society. This characterization has been challenged by other critics who claim either that it is an anachronistic use of the word, or that her beliefs were not progressive enough to merit such a designation (Richards 1-2). Despite the criticisms of her work, Christine de Pisan awakened her readers to the equality of all peoples through her rhythmic poems and prose delineating the need for personal maturity and making a contribution to society.

De Pizan completed forty-one pieces during her thirty-year career (1399–1429). She earned her accolade as Europe’s first professional woman writer (Redfern 74). Her success stems from a wide range of innovative writing and rhetorical techniques that critically challenged renowned male writers such as Jean de Meun who, to Pizan’s dismay, incorporated misogynist beliefs within their literary works. In recent decades, de Pizan's work has been returned to prominence by the efforts of scholars such as Charity Cannon Willard and Earl Jeffrey Richards.

Christine de Pisan was born in Venice. She was the daughter of Tommaso di Benvenuto da Pizzano (Thomas de Pizan), a physician, professor of astrology, and Councilor of the Republic of Venice. Following her birth, Thomas de Pizan accepted an appointment to the court of Charles V of France, as the King’s astrologer, alchemist, and physician. In this atmosphere, she was able to pursue her intellectual interests. She successfully educated herself by immersing herself in languages, the rediscovered classics, and humanism of the early Renaissance, within Charles V’s royal archive, which housed a vast amount of manuscripts. De Pizan did not, however, assert her intellectual abilities, or establish her authority as a writer until she was widowed at the age of twenty-four (Redfern 76).

She married Etienne du Castel, a royal secretary to the court, at the age of fifteen. With du Castel, she bore three children, a daughter (who went to live at the Dominican Abbey in Poissy in 1397, as a companion to the king's daughter, Marie), a son Jean, and another child, who died in childhood (Willard 35). De Pisan’s familial life was threatened in 1390, however, when Christine’s husband, while in Beauvais on a mission with the king, suddenly died in an epidemic (Willard 39). Following du Castel’s death, she was left to support a large household, and to pay off her husband's extensive debts. When she tried to collect money due to her husband’s estate, she faced complicated lawsuits regarding the recovery of salary due to her husband (Willard 39). In order to support herself and her family, de Pisan turned to writing. By 1393, she was writing love ballads, which caught the attention of wealthy patrons within the court, who were intrigued by the novelty of a female writer that had composed texts about her romantic exploits (Redfern 77). De Pizan's output during this period was prolific. Between 1393-1412, she composed over three hundred ballads, and many more shorter poems. 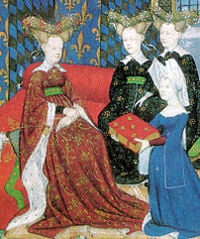 Nonetheless, de Pizan’s participation in the first literary quarrel, in 1401-1402, allowed her to move beyond the courtly circles, and ultimately to establish her status as a writer concerned with the position of women in society. During these years, de Pizan involved herself in a renowned literary debate, the Querelle du Roman de la Rose (Willard 73). Pizan helped to instigate this particular debate when she began to question the literary merits of Jean de Meun’s the Roman de la Rose (Romance of the Rose). Written in the thirteenth century, the Romance of the Rose satirizes the conventions of courtly love while also critically depicting women as nothing more than seducers. De Pizan specifically objected to the use of vulgar terms within Jean de Meun’s allegorical poem. She argued that these terms denigrated the proper and natural function of sexuality, and that such language was inappropriate for female characters such as Lady Reason. According to de Pizan, noble women did not use such language (Quilligan 40). Her critique primarily stems from her belief that Jean de Meun was purposely slandering women through the debated text.

The debate itself is quite extensive and by the end of it, the principal issue was no longer Jean de Meun’s literary capabilities. Instead, due to her participation in the debate, the focus had shifted to the unjust slander of women within literary texts. This dispute helped to establish her reputation as a female intellectual who could assert herself effectively and defend her claims in the male-dominated literary realm. De Pisan continued to refute abusive literary treatments of women. 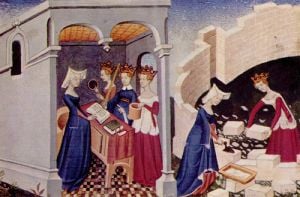 Picture from The Book of the City of Ladies

By 1405, Christine de Pisan completed her most successful literary works, The Book of the City of Ladies and The Treasure of the City of Ladies, or The Book of the Three Virtues. The first of these proves to show the importance of women’s past contributions to society, and the second strives to teach women of all estates how to cultivate useful qualities in order to counteract the growth of misogyny (Willard 135).

Her final work was a poem eulogizing Joan of Arc, the peasant girl who took a very public role in organizing French military resistance to English domination in the early fifteenth century. Written in 1429, The Tale of Joan of Arc celebrates the appearance of a woman military leader who according to de Pisan, vindicated and rewarded all women’s efforts to defend their own sex (Willard 205-205). After completing this particular poem, it seems that, at the age of sixty-five, de Pisan decided to end her literary career (Willard, 207). The exact date of her death is unknown. However, her death did not end the appeal of her renowned literary works. On the contrary, her legacy continued on because of the voice she created and established as an authoritative rhetorician. 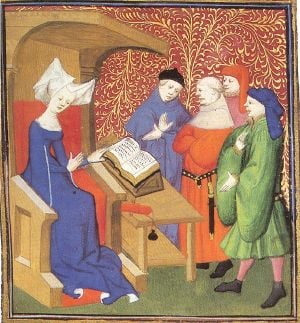 Christine de Pizan lecturing to a group of men.

During the Querelle du Roman de la Rose, de Pizan responded to Jean de Montreuil, who had written her a treatise defending the misogynist sentiments within the Romance of the Rose. She begins by claiming that her opponent was an "expert in rhetoric" as compared to herself, "a woman ignorant of subtle understanding and agile sentiment." In this particular apologetic response, she belittles her own style. She is employing a rhetorical strategy by writing against the grain of her meaning, also known as antiphrasis (Redfern 80). Her ability to employ rhetorical strategies continued when she began to compose literary texts following the Querelle du Roman de la Rose.

Within The Book of the City of Ladies, de Pisan creates a symbolic city in which women are appreciated and defended. Having no female literary tradition to call upon, she constructed three allegorical fore mothers: Reason, Justice, and Rectitude. She enters into a dialogue, a movement between question and answer, with these allegorical figures which is from a completely female perspective (Campbell 6). These constructed women lift de Pisan up from her despair over the misogyny prevalent in her time. Together, they create a forum to speak on issues of consequence to all women. Only female voices, examples, and opinions provide evidence within this text. Christine de Pisan, through Lady Reason in particular, argues that stereotypes of woman can be sustained only if women are prevented from entering the dominant male-oriented conversation (Campbell 7). Overall, de Pisan hoped to establish truths about women that contradicted the negative stereotypes that she had been identified in previous literature. Her choice of media as the voices of Reason, Justice, and Rectitude, she formulated a female dialogue that celebrated women and their accomplishments.

In The Treasure of the City of Ladies, de Pisan highlights the persuasive effect of women’s speech and actions in everyday life. In this particular text, she argues that women must recognize and promote their ability to make peace. This ability will allow women to mediate between husband and subjects. Christine de Pisan also claims that slanderous speech erodes one’s honor and threatens the sisterly bond among women. She then argued that "skill in discourse should be a part of every woman’s moral repertoire" (Redfern 87), declaring that a woman’s influence is realized when her speech equates chastity, virtue, and restraint. Christine de Pisan proved that rhetoric is a powerful tool that women could employ to settle differences and to assert themselves. Overall, she presented a concrete strategy that allowed all women, regardless of their status, to undermine the dominant, patriarchal, discourse.

Christine de Pizan contributed to the rhetorical tradition as a woman counteracting the dominant discourse of the time. Rhetorical scholars have extensively studied her persuasive strategies. It has been concluded that de Pizan successfully forged a rhetorical identity for herself, and also encouraged all women to embrace this identity by counteracting misogynist thinking through the powerful tool of persuasive dialogue.