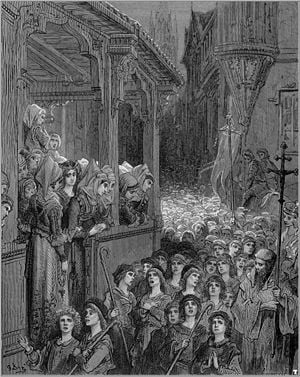 The Children's Crusade, by Gustave Doré

The Children's Crusade was a movement in 1212, initiated separately by two boys, each of whom claimed to have been inspired by a vision of Jesus. One of these boys mobilized followers to march to Jerusalem to convert Muslims in the Holy Land to Christianity and recover the True Cross. Whether comprised mainly of children or adults, they marched bravely over the mountains into Italy, and some reached Rome, where their faith was praised by Pope Innocent III. Although the Pope did not encourage them to continue their march, stories of their faith may have stimulated future efforts by official Christendom to launch future Crusades.

The movement never reached the Holy Land. Many returned home or resumed previous lives as vagabonds, while others died on the journey, and still others were reportedly sold intoslavery or drowned at sea. Legends of both miracles and tragedies associated with the Children's Crusade abound, and the actual events continue to be a subject of debate among historians.

Although the common people held the same strong feelings of piety and religiousness that moved the nobles to take up the Cross in the thirteenth century, they did not have the finances, equipment, or military training to actually go on crusade. The repeated failures of earlier crusades frustrated those who held the hope to recover the True Cross and liberate Jerusalem from the "infidel" Muslims. This frustration led to unusual events in 1212 C.E., in Europe.

The traditional view of the Children's Crusade is that it was a mass movement in which a shepherd boy gathered thousands of children whom he proposed to lead to the conquest of Palestine. The movement then spread through France and Italy, attended by miracles, and was even blessed by the Pope Innocent III, who said that the faith of these children "put us to shame."

The charismatic boy who led this Crusade was widely recognized among the populace as a living saint. Some 30,000 people were involved in the Crusade, only a few of them over 12 years of age. These innocent crusaders traveled southwards towards the Mediterranean Sea, where they believed that the sea would part so they could march on to Jerusalem, but this did not happen. Two merchants gave passage on seven boats to as many of the children as would fit. However, the children were either taken to Tunisia and sold into slavery, or died in a shipwreck on the island of San Pietro (off Sardinia) during a gale. In some accounts, they never even reached the sea before dying or giving up from starvation and exhaustion. 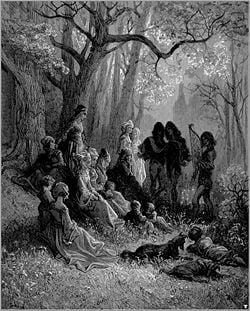 Troubadours sing the glories of the crusades.

Modern research has challenged the traditional view, asserting that the Children's Crusade was neither a true Crusade nor made up of an army of children. The Pope did not call for it, nor did he bless it. However, it did have an historical basis. Namely, it was an unsanctioned popular movement, whose beginnings are uncertain and whose ending is even harder to trace. Stories of the Crusades were the stuff of song and legend, and as storytellers and troubadours embellished it, the legend of the Children's Crusade came to take on a life of its own.

There were actually two similar movements in 1212, one in France and the other in Germany, which came to be merged together in the story of the Children's Crusade. Both were indeed inspired by children who had visions.

In the first movement, Nicholas, a ten-year-old shepherd from Germany, led a group across the Alps and into Italy in the early spring of 1212. Hundreds—and then thousands—of children, adolescents, women, the elderly, the poor, parish clergy, plus a number of petty thieves and prostitutes, joined him in his march south. He actually believed that God would part the waters of the Mediterranean and they would walk across to Jerusalem to convert the Muslims with love. The common folk praised the marchers as heroes as they passed through their towns and villages, but the educated clergy criticized them as deluded. In August, Nicholas' group reached Lombardy and other port cities. Nicholas himself arrived with a large group at Genoa on August 25. To their great disappointment the sea did not open for them, nor did it did allow them to walk across the waves. Here, many returned home, while others remained in Genoa. Some seem to have marched on to Rome, where the embarrassed Pope Innocent III indeed praised their zeal but released them from their supposed vows as crusaders and sent them home. The fate of Nicholas is unclear. Some sources say that he later joined the Fifth Crusade, others reported that he died in Italy.

The second movement was led by a 12 year old shepherd boy named Stephen de Cloyes near the village of Châteaudun in France, who claimed in June, 1212, that he bore a letter from Jesus for the French king. Stephen had met a pilgrim who asked for bread. When Stephen provided it, the beggar revealed himself to be Jesus and gave the boy a letter for the king. No one knows the content of the letter, but it is clear that the king, Phillip II, did not want to lead another crusade at that time.[1] Nevertheless, Stephen attracted a large crowd and went to Saint-Denis where he was reportedly seen to work miracles. However, on the advice of clerics of the University of Paris and on the orders of Philip II, the crowd was sent home, and most of them went. None of the contemporary sources mentions this crowd heading to Jerusalem.

The Franciscans were one of several movements that appealed to "wandering poor."

Research suggests the participants in these movements were not primarily children. In the early 1200s, bands of wandering poor were commonplace throughout Europe. These were people displaced by economic changes at the time which forced many poor peasants in northern France and Germany to sell their land. These bands were referred to as pueri (Latin for "boys") in a condescending manner. Such groups were involved in various movements, from the heretical Waldensians to the theologically acceptable Franciscans, to the so-called "children's crusaders."

Thus, in 1212, a young French puer named Stephen and a German puer named Nicholas separately began claiming that they each had visions of Jesus. This resulted in bands of roving poor being united into a religious movement which transformed this necessary wandering into a religious journey. The pueri marched, following the Cross and associating themselves with Jesus' biblical journey, the story of Moses crossing the Red Sea, and also the aims of the Crusades.

Thirty years later, chroniclers read the accounts of these processions and translated pueri as "children" without understanding the usage. Moreover, the movement did indeed seem to have been inspired by the visions and preaching of two young boys. However, the term "Children's Crusade" was born thirty years after the actual events.

Peter Raedts's (1977) analysis is considered the best source to date to show the many issues surrounding the Children's Crusade.[2] According to Raedts, there are only about 50 sources from the period that talk about the Children's Crusade, ranging from a few sentences to half a page. Raedts categorizes the sources into three types depending on when they were written:

Raedts does not consider the sources after 1250 to be authoritative, and of those before 1250, he considers only about 20 to be authoritative. It is only in the later non-authoritative narratives that a "Children's Crusade" is implied by such authors as Beauvais, Roger Bacon, Thomas of Cantimpré, Matthew Paris, and others.

Prior to Raedts there had only been a few academic publications researching the Children's Crusade. Most of them uncritically accepted the validity of relatively late sources. The earliest were by G. de Janssens (1891), a Frenchman, and R. Röhricht (1876), a German. They did analyze the sources, but did not apply this analysis the story itself. German psychiatrist J. F. C. Hecker (1865) did give an original interpretation of the Crusade, regarding is as the result of "diseased religious emotionalism."[3] American medievalist D. C. Munro (1913-14) was the first to provide a sober account of the Children's Crusade without legends.[4] Later, J. E. Hansbery (1938-9) published a correction of Munro's work claiming the Children's Crusade to have been an actual historical Crusade, but it has since been repudiated as being itself based on an unreliable source.[5] P. Alphandery first published his ideas about the Children's Crusade a 1916 article, which was expanded to book form in 1959. He considered the event to be an expression of the medieval "Cult of the Innocents," as a sort of sacrificial rite in which children gave themselves up for the good of Christendom. His sources have also been criticized as biased.[6] Adolf Waas (1956) saw the events as a manifestation of chivalric piety and as a protest against the glorification of the holy war. H. E. Mayer (1960) further developed Alphandery's ideas of the Innocents, saying children were thought to be the chosen people of God because they were the poorest, recognizing the cult of poverty he said that "the Children's Crusade marked both the triumph and the failure of the idea of poverty."

Norman Cohn (1971) saw it as a millennial movement in which the poor tried to escape the misery of their everyday lives. He and Giovanni Miccoli (1961) both noted that the contemporary sources did not portray the participants as children. It was this recognition that undermined earlier interpretations. [7]

Beyond the analytical studies, interpretations and theories about the Children's Crusades have been put forth.

Norman Zacour in the survey, A History of the Crusades (1962), generally follows Munro's conclusions, and adds that there was a psychological instability of the age, concluding that the Children's Crusade "remains one of a series of social explosions, through which medieval men and women—and children, too—found release."

Donald Spoto, in a book about Saint Francis, said monks were motivated to call the participants "children," and not wandering poor, because being poor was considered pious and the Church was embarrassed by its wealth in contrast to the poor. This, according to Spoto, began a literary tradition from which the popular legend of children originated. This idea follows closely with H. E. Mayer.

Church historian Steven Runciman gives an account of the Children's Crusade in his A History of the Crusades, in which he cites Munro's research. Raedts, however, criticizes Runciman's account misunderstanding Munro's basic conclusion.

The Children's Crusade has inspired numerous works of twentieth century and contemporary music, and literature including:

Retrieved from https://www.newworldencyclopedia.org/p/index.php?title=Children%27s_Crusade&oldid=1032193
Categories:
Hidden category:
This page was last edited on 10 February 2020, at 00:19.
Content is available under Creative Commons Attribution/Share-Alike License; additional terms may apply. See Terms of Use for details.