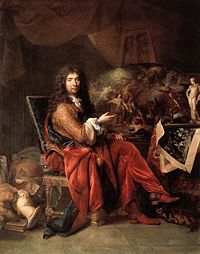 Charles Le Brun (February 24, 1619 – February 22, 1690) was a true Renaissance man. The reputation he garnered for his paintings was matched by his creations in architecture, both in buildings and in gardens and in sculpture as well. He was one of the most dominant artists and art theorists of France during the seventeenth century. Le Brun made a major contribution to the theory of visual expression (physiognomy). His main focus was on scholarly composition, which he felt had as its ultimate goal the nourishment of the spirit.[1]

Le Brun was well liked, well respected, and thus well employed by several political figures in France. These included Chancellor Pierre Séguier, Cardinal Richelieu and Nicolas Fouquet. Under their directions, Le Brun was given leave to create some of the most impressive masterpieces seen in the history of France. He particularly is recognized for his brilliant and captivating religious paintings.

He was responsible for the decoration of the Palaces of Versailles, Vaux, and Hesselin, the council apartments in the Louvre, and numerous churches. His crowning achievement was the Palace of Versailles. Le Brun designed every detail of Versailles, including the architecture, decorations, and landscape. The King, Louis XIV and his chief minister Jean-Baptiste Colbert commissioned him for the endeavor.

Charles Le Brun dominated his time like no other artist. He was esteemed as the most talented artist of his day. It was not until the appearance of Jacques-Louis David, that artistic authority in France was again so concentrated in one man. 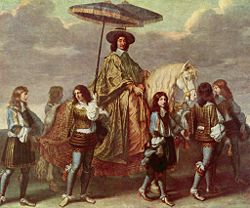 Charles Le Brun was born into art. His father, a Parisian sculptor, believed that art and education were both important. At the age of eleven, Le Brun was placed in the studio of Simon Vouet. This placement was the direct result of the influence of Chancellor Séguier. He also studied under the direction of François Perrier.

Four years later, Le Brun began receiving commissions for his work. At the tender age of fifteen, Le Brun began painting for the influential and famous people of France, like Cardinal Richelieu. He received praise not just from Richelieu, but other esteemed artists as well. Among them was Nicolas Poussin. In 1642, Poussin and Le Brun ventured to Rome to broaden the scope of their art.

Le Brun remained in Rome for just over four years, working under Poussin. He was able to live comfortably because of a pension he received from the chancellor. It was under this close tutelage that Le Brun was taught, influenced, and eventually adapted Poussin's art theories.

In 1646, Le Brun recognized that it was time to return home to Paris and begin his career as a painter. Once back in Paris the work came quickly and easily. Among Le Brun's esteemed patrons was Superintendent Fouquet. For Fouquet, Le Brun painted very grand portraits of Anne of Austria, Louis XIII, and Pope Urban VIII.

Le Brun went on to find employment at the chateau of Vaux-le-Vicomte, just south of Paris. It was during this time that he gained the good graces of Cardinal Mazarin, Richlieu's predecessor. Le Brun also gained the attention of Jean-Baptiste Colbert, the minister of finance to Louis XIV. Colbert saw in Le Brun a man of great organizational skills and they became business partners. The two eventually took control of the Academy of Painting and Sculpture (Académie royale de peinture et de sculpture, 1648), and the Academy of France at Rome (1666), and pioneered a new direction for the industrial arts. 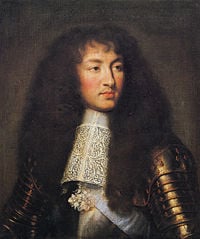 In 1662 Le Brun and Colbert established Gobelins manufactory. It began as a school for the basic manufacture of furniture to be used in the royal palaces; later it would become known for tapestries. Le Brun was now commanding and serving as director for the industrial arts at Gobelins. Simultaneously, he held posts with the Academy. Through these two facets, Le Brun had some say on every piece of art that was being produced in France during his lifetime. In addition to all this responsibility his own contributions were many. He became known as the inventor of the Louis XIV Style and also gave direction to the national tendencies which endured centuries after his death.

Between 1662 and 1673, Charles Le Brun became a titled Nobleman and he received the title of First Painter to the King in 1664. He was also named Knight of the Order of St. Michel and Chancellor for Life of the Royal Academy of Painting and Sculpture. Other notable titles were bestowed on him during these years: in 1666 he became the Founder of the Academy of France in Rome; in 1668 he was given the title of Equerry and the same year he was named Rector in Perpetuity of the Royal Academy of Painting in Paris.[2]

King Louis XIV of France was known for his pompous and decadent tastes, and he found that many of Le Brun's paintings captured the characteristics he most wanted to emphasize. He admired the decorations at Vaux-le-Vicomte so much that he soon began commissioning Le Brun for other work. With Le Brun's successive paintings, including Le Premier Peintre du Roi (The First Painter of his Majesty), the admiration of the King, and therefore of France, grew to the point where Louis declared him the greatest French artist of all time. For his work for the king Le Brun received a pension of 12,000 livres. 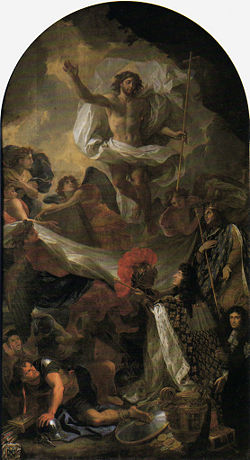 He soon became the director of all that was done in the royal palaces. The following year, he became director of the Académie royale de peinture et de sculpture, where he laid the basis of academicism. Le Brun also did a series of paintings dealing with the history of Alexander the Great. The paintings, The Battles of Alexander The Great opened up another way for Le Brun to flatter the king. He continually made comparisons between the two leaders, much to the satisfaction of Louis XIV. It was during these paintings that Le Brun's characteristic style emerged.

The next few years found Le Brun working steadily. He began his works that were to be a part of the Gallery of Apollo at the Louvre, but he never finished them. Le Brun stopped this series of paintings to travel with the king to Flanders. When he returned he took up residence in the the small Château de Saint-Germain-en-Laye, where he completed several small compositions.

By far, his largest and most time consuming project was reserved for his efforts at the Palace of Versailles. Le Brun dictated how much of Versailles should be created and restored, but he also reserved special projects, such as the Halls of War and Peace (Salons de la Guerreand de la Paix, 1686), the Ambassadors' Staircase, and the Great Hall of Mirrors (Galerie des Glaces, 1679–1684 for himself. Le Brun's decoration is not only an artistic achievement, it is a definitive monument to a royal reign.

At the death of his partner Colbert in 1683, the new Minister Louvois tried to attack Le Brun at the Royal Academy, thinking that given the choice between a painter and the all-powerful Minister, the members of the Academy would choose the Minister. Le Brun gave up his functions of Chancellor and Rector of the Academy. In reality, he was aware of the hostility threatening him and hoped to obtain a new mandate through re-election. This tactic was so successful that his colleagues gave him the new title of Director in addition to being re-elected to the positions of Chancellor and Rector. This humiliated Louvois before the entire Academy and served to fuel his animosity.

After Le Brun's death, Louvois greatly undermined the painter's posthumous popularity. He issued an order to affix seals to all of the painter's works and drawings, under the pretext that all of the First Painter's work should be dedicated to the King alone. A great number of Le Brun's masterpieces were seized and placed in vaults of the Louvre, and for centuries, were not accessible to the public. As a result, virtually none of Le Brun's works can be found anywhere in the world outside France.[3]

Le Brun was one of the first French artists to achieve success abroad, and worldwide prestige enjoyed by French art for nearly two centuries had its origin in his era.

After Charles Le Brun died, his treatise Méthode pour apprendre à dessiner les passions (1668) was published. In the treatise Le Brun reemphasized the expression of emotion that was evoked during the painting process. He wrote about these emotions in great descriptive detail and as a result his writings have been studied in art theory classes for centuries. Le Brun's treatise on physiognomy was written at a time when the subject was considered to be an occult science. In this book he executed drawings comparing human and animal faces, a theme later developed with reference to the emotions by Charles Darwin in his book The Expression of the Emotions in Man and Animals.

A recent study showed that the world's most visited work of art by an Old Master Painter is La Joconde by Leonardo da Vinci. The second is the Hall Of Mirrors at Versailles, created by Le Brun.[4]

Many of his drawings are in the Louvre and the Monaco Royal Collection.

Retrieved from https://www.newworldencyclopedia.org/p/index.php?title=Charles_Le_Brun&oldid=1003143
Categories:
Hidden category:
This page was last edited on 6 February 2017, at 21:44.
Content is available under Creative Commons Attribution/Share-Alike License; additional terms may apply. See Terms of Use for details.