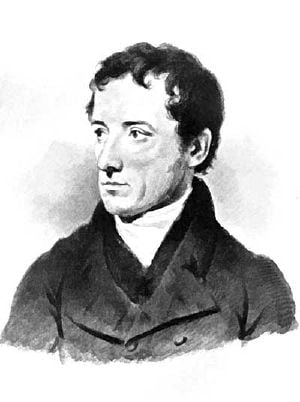 Charles Lamb (February 10, 1775 –- December 27, 1834) was an English poet, fiction writer, literary critic, and essayist of the English Romantic period. A close contemporary and personal friend of Samuel Taylor Coleridge and William Wordsworth, Charles Lamb was considered a critical member of the Lake Poets, but unlike Wordsworth and Coleridge his poetry never achieved lasting fame. Eventually, Lamb redirected his energies away from verse to prose, and in the process he became one of the most valuable and enduring essayists of the Romantic period.

As an essayist, Lamb is best known for two collections: The first, Essays of Elia consists of a series of deeply autobiographical memoirs and essays written from the pseudonymous perspective of "Elia" and originally published as a serial for London Magazine. Essays of Elia are acclaimed as some of the finest early examples of the essay form in English, as well as exemplary masterpieces of English prose. The second work, Tales from Shakespeare, is perhaps more unusual: commissioned as a retelling of |Shakespeare's plays for children, Lamb retold Shakespeare's works while interspersing his own critical commentary on the plays. Some of Lamb's criticisms would go on to influence the later development of nineteenth-century Shakespearian criticism.

On the whole, Lamb, while a minor poet of the Romantic period, is one of its most invaluable authors. His essays read like the finest journalism, and provide readers with a panoramic view of the life and literary currents of one of the most dramatic periods in English literary history.

Lamb was the youngest child of John Lamb, a lawyer's clerk. He was born in Crown Office Row, Inner Temple, London, and spent his youth there, later going away to school at Christ's Hospital, a notorious boarding school. At Christ's Hospital, Lamb formed a close friendship with Samuel Taylor Coleridge which would last for many years. After leaving school in 1789 at age 14, an unconquerable stutter disqualified him from a career in the clergy. For a short time Lamb worked in the office of Joseph Paice, a London merchant, and then for 23 weeks, until February 8, 1792, he held a small post in the Examiner's Office of the South Sea House. Its subsequent downfall in a pyramid scheme after Lamb left would be contrasted to the company's prosperity in the first Elia essay. On April 5, 1792, Lamb went to work in the Accountant's Office for the British East India Company.

Charles and his sister Mary both suffered periods of mental illness, and Charles spent six weeks in a psychiatric hospital during 1795. By then he was, however, already making his name as a poet. "On an Infant Dying as Soon as Born" was one of Lamb's most popular poems, and its opening lines may give the reader a glimpse of Lamb's typically sentimental style:

I SAW where in the shroud did lurk
A curious frame of Nature's work;
A floweret crush'd in the bud,
A nameless piece of Babyhood,
Was in her cradle-coffin lying;
Extinct, with scarce the sense of dying:
So soon to exchange the imprisoning womb
For darker closets of the tomb!

On September 22, 1796, a terrible event occurred that would change Lamb's life. Mary, "worn down to a state of extreme nervous misery by attention to needlework by day and to her mother at night," was seized, stabbing her mother to death with a table knife in an acute rage. With the help of friends Lamb succeeded in obtaining his sister's release from what would otherwise have been lifelong imprisonment, on the condition that he take personal responsibility for her safekeeping. In 1799, John Lamb died, leaving Charles Lamb (then aged 24) to carry on as best he could. Mary came to live again with him in Pentonville. In 1800, they set up a shared home at Mitre Court Buildings in the Temple, where they lived until 1809.

Despite Lamb's bouts of melancholia, both he and his sister enjoyed an active and rich social life. Their London quarters became a kind of weekly salon for many of the most outstanding theatrical and literary figures of the day. Charles Lamb, having been to school with Samuel Coleridge, counted Coleridge as perhaps his closest, and certainly his oldest, friend. On his deathbed, Coleridge had a mourning ring sent to Lamb and his sister. Fortuitously, Lamb's first publication was in 1796, when four sonnets by "Mr. Charles Lamb of the India House" appeared in Coleridge's Poems on Various Subjects. In 1797, he contributed additional blank verse to the second edition. In 1797, he met the Wordsworths, William and Dorothy, on his short summer holiday with Coleridge at Nether Stowey, and thereby struck up a lifelong friendship with the great poet. In London, Lamb became familiar with a group of younger, radical writers who advocated revolution and political reform, including Percy Bysshe Shelley, William Hazlitt, and Leigh Hunt.

Lamb continued to clerk for the East India Company and doubled as a writer in various genres. In 1802 he published his first and only tragedy, John Woodvil, a magnificent failure. His comedy, Mr. H, was performed at Drury Lane in 1807, where it was roundly booed. In the same year, Tales from Shakespeare (Charles handled the tragedies; his sister Mary, the comedies) was published, and became a best seller for William Godwin's "Children's Library."

Lamb's collected essays, under the title Essays of Elia, (the pen name Lamb used as a contributor to The London Magazine) were published in 1823. A further collection was published ten years or so later, shortly before Lamb's death. He died of an infection, erysipelas, contracted from a cut on his face, on December 29, 1834, just a few months after Coleridge. Lamb was buried in All Saints' Churchyard, Edmonton, Greater London. His sister, who was ten years his senior, survived him for more than a dozen years. She is buried beside him.

Retrieved from https://www.newworldencyclopedia.org/p/index.php?title=Charles_Lamb&oldid=1003122
Categories:
Hidden category:
This page was last edited on 3 February 2017, at 15:43.
Content is available under Creative Commons Attribution/Share-Alike License; additional terms may apply. See Terms of Use for details.