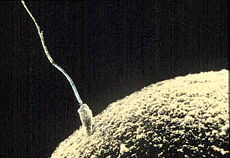 The fertilizing of an ovum by a sperm leads to cell differentiation whereby a human with 100 trillion cells and hundreds of cell types is formed, with the cells organized into diverse and complex tissues and organs.

Cellular differentiation is an embryological process by which an unspecialized cell becomes specialized into one of the many cell types that make up the body. Cell differentiation consists of the progressive restriction of the developmental potential and increased structural and functional specialization of cells, leading to the formation of specialized cells, tissues, and organs. During the process, the morphology and physiology of the cell may change dramatically, but the genetic makeup usually remains the same.

The process of cell differentiation is a remarkable phenomena. Starting from a single fertilized egg cell, with one set of DNA and cellular components, an adult human is formed that has hundreds of diverse cell types, with the initial cell differentiated and organized into such diverse and complex structures as eyes, skin, bones, lungs, brain, and so forth—with each component cell having the same genetic blueprint. Currently, cell differentiation is the area of the most intensive research in developmental biology.

In sexually reproducing organisms, fertilization of an ovum with a sperm induces not only cleavage (cellular multiplication) of the zygote, but also cell determination (deciding the fate of the cells) and cell differentiation so as to generate cells that do different jobs. There is then the three–dimensional organization of cells that do different jobs into groups of cells that, together, do specific jobs within the multicellular organism. The sophisticated mechanisms of cell determination and cell differentiation are responsible for the complex but directional development in embryogenesis.

More than 200 recognizably different types of cells exist in humans and other vertebrate animals (Thomson 2002). These specialized cells are organized into remarkably diverse and complex structures, such as the eye, the hand, and the brain, each capable of carrying out many sophisticated activities. Altogether, an adult human body consists of 100,000,000,000,000 cells.

There are three basic categories of cells that make up the mammalian body: Germ cells (which give rise to gametes like sperm and ova), somatic cells (most of the body cells forming different tissues and organs), and stem cells (which are able to divide for an indefinite period and give rise to specialized cells). Yet, all the structures of the body and the different cell types within them are all derived from a single fertilized egg cell through differentiation.

In terms of genetics, almost all cells of an organism are equipped with the potential to develop into an intact individual. However, most of the body cells are, in natural condition, unable to work as a zygote cell and give rise to a new individual; similarly, the specialized somatic cells are incapable of developing into other types of cells. This restriction of the developmental potential of the cells is due to cell determination, cell differentiation, and cell memory. Thus, the development of different types of cells, the division of labor among the cells and tissues, and direction of the embryogenesis are all governed by the principle of cell determination and cell differentiation.

Differentiation is a maturing process during which a cell becomes recognizable and specialized. During differentiation, certain genes are turned on, or become activated, while other genes are switched off, or inactivated (NCBI 2004). This process is intricately regulated. External stimuli, such as growth factors, trigger cells to differentiate. Differentiation can involve changes in numerous aspects of cell physiology; size, shape, polarity, metabolic activity, responsiveness to signals, and gene expression profiles can all change during differentiation (NCBI 2004). Thus, the differentiated cells produce and use specific proteins characteristic of their differentiation type. For example, red blood cells produce hemoglobin to help transport oxygen, and muscle cells produce myosin to help with muscle contraction. As a result, a differentiated cell will develop specific structures and perform certain functions. Once differentiated, these specialized cells (somatic cells) are usually terminal and non–dividing, though some may be induced to divide following injury (Thomson 2002).

A cell that is able to differentiate into all cell types is known as totipotent. In mammals, only the zygote and the products of the first few cell divisions (cleavage) are totipotent, while in plants, many differentiated cells can become totipotent with simple laboratory techniques. In human beings, approximately 4 days after fertilization and after several cycles of cell division, these cells begin to specialize (NCBI 2004).

A cell that is capable of differentiating into many cell types is known as pluripotent. These cells are called stem cells in animals and meristematic cells in higher plants. The pluripotent cells can divide to produce differentiated descendants, yet also retain the ability to divide to maintain the stem cell population. They are the most versatile stem cells.

In cytopathology the level of cellular differentiation is used as a measure of cancer progression. "Grade" is a marker of how differentiated a cell in a tumor is.

The cytoplasm of the fertilized egg is not homogeneous. It contains gradients of mRNAs and proteins. These are the products of the mother's genes and were deposited in the egg during oogenesis (formation of female gamete). Cleavage of the fertilized egg partitions it into thousands of cells of normal size. Each contains a nucleus descended from the zygote nucleus. But each nucleus finds itself partitioned off in cytoplasm containing a particular mix of mRNAs and proteins. When the blastula has produced some 4,000 cells, transcription and translation of its nuclear genes begins and the mother's mRNA molecules, that up to now have been the source of all protein synthesis, are destroyed. The genes that are expressed by the nucleus in a given cell are regulated by the molecules, mostly protein transcription factors, found in the cytoplasm surrounding that nucleus. Thus, the chemical concentration gradients of the zygote help determine relative position. Such positional information is called cytoplasmic determinants. Cytoplasmic determinants include proteins as well as mRNAs found in the cytoplasm of the zygote. The fate of the cleavage produced cells is determined by their right place–right time. The cells become more or less determined sometime between the early and late gastrula stages (Alberts et al. 1994).

Another means by which positional information is transduced into cellular differentiation, occurs with the interaction of cells within the multicellular embryo. Here, cell–to–cell signaling occurs, and via a process called induction cells in different positions respond to these signals by altering their gene expression (Alberts et al. 1994).

For example, through a series of decisions taken before, during, and just after gastrulation, certain cells in the somites of a vertebrate become specialized at a very early stage as precursors of skeletal muscle cells; they then migrate from the somites into various other regions including those where the limbs will form. A group of transcription factors, called myogenic regulatory factors (MRFs) are found to involve in switching on the muscle cell lineage during development (Browder 1996). The muscle precursor cells do not start to manufacture large quantities of muscle–specific proteins until days, weeks, or even years after leaving the somites. Thus, a determined cell undergoes a self–perpetuating change of internal character that distinguishes it and its progeny from other cells in the embryo and commits them to a specialized course of development.

Retrieved from https://www.newworldencyclopedia.org/p/index.php?title=Cell_differentiation&oldid=1095346
Categories:
This page was last edited on 13 January 2023, at 01:40.
Content is available under Creative Commons Attribution/Share-Alike License; additional terms may apply. See Terms of Use for details.