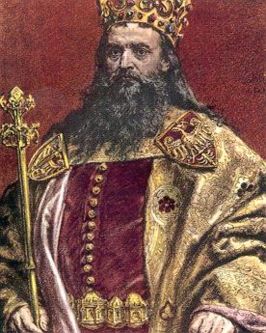 Casimir III, called the Great (Polish: Kazimierz Wielki; 1310 – 1370), King of Poland (1333-70), was the son of King Władysław I the Elbow-high and Jadwiga of Gniezno and Greater Poland. Casimir III is the only Polish King who has been honored with the title 'Great', awarded less for military exploits than for his legal and administrative reforms (Lukowski and Zawadzki, 29). His rule was marked by a period of peace and prosperity which has been described as 'just and benign by the standards of the age' (Nolan, 309). Jews, persecuted elsewhere in Europe at the time, benefited from the 'fairmindedness' of his rule (Backman, 423). Casimir III made peace with Bohemia and with the Teutonic Knights, consolidated the monarchy, codified Polish law and did much to improve the lot of Jews and peasants (Nolan, 309). Unfortunately, he did not father an heir and his death left Poland 'vulnerable to personal and dynastic interests' while also opening up the way for continued eastwards expansion (Lukowski and Zawadzki, 29). He was the last king of the Piast dynasty. 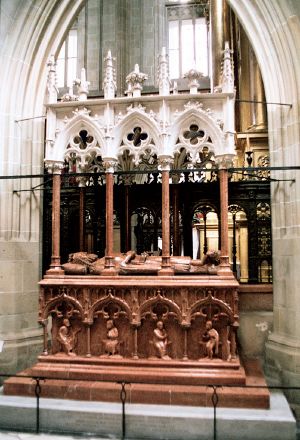 Sarcophagus of Kazimierz the Great at Wawel Cathedral.

Kazimierz is the only Polish king who both received and has kept the title of the Great in Polish history (Boleslaw I Chrobry was once also called the Great, but is not called this today), and the title is well deserved. When he received the crown, his hold on it was in danger, as even his neighbors did not recognize his title and instead called him "king of Kraków." The economy was in ruins, the country was depopulated and exhausted by war. On his death, he left a country doubled in size (mostly through the addition of land in today's Ukraine, then the Duchy of Halicz), prosperous and much more viable as a state than it has been previously. Although he is depicted as a peaceful king in children's books, he in fact waged many wars and was readying for others just before he died. One of his first acts was to renew his predecessor's 1343 treaty with the Teutonic Knights, securing peace. This then enabled him to consolidate his own authority within Poland, which at the time resembled a narrow and irregular lozenge of territory...with possible fewer than 800,000 inhabitants (Lukowski and Zawadzki, 23).

Royal seal of Kazimierz the Great.

Kazimierz the Great built fifty new castles across Poland and fortified twenty-seven towns (Lukowski and Zawadzki, 28). He reformed the Polish army and the civil and criminal law. At the Sejm in Wislica, March 11, 1347, he introduced legal reforms in the jurisprudence of his country. He sanctioned a code of laws for Great and Little Poland, which earned him the title of "the Polish Justinian"; and he also limited the interest rate charged by Jewish money-lenders to Christians to eight percent per annum, a rate of 108-180 percent being previously common. Owing to extremely high and unstable inflation rates, significantly lower interest rates would result in net losses for the lender. For example, in 1264 the King of Austria had capped Jewish money-lenders' interest rates at eight dinars on the talent, approximately 170 percent at the time. This measure was passed after consistent pressure by the szlachta of the Sejm (who were primary clients of Jewish money-lenders). This measure was to the King's detriment, who later affirmed that Jews be allowed to loan on interest as "property" of the King, in order to supplement the King's income when needed. He founded the University of Kraków, although his death stalled the university's development (which is why it is today called the "Jagiellonian" rather than "Casimirian" University).

He organized a meeting of kings at Kraków (1364) in which he exhibited the wealth of the Polish kingdom.

In order to enlist the support of noblemen (szlachta), especially the military help of pospolite ruszenie, Kazimierz was forced to give up important privileges to them, which made them finally clearly dominant over townsfolk (burghers or mieszczanstwo). 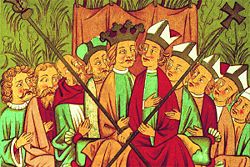 Fourteenth-century wiec, in the reign of Kazimierz the Great.

In 1335, in the "treaty of Trenčín," Kazimierz relinquished "in perpetuity" his claims to Silesia. In 1355 in Buda Kazimierz designated Louis of Anjou (Louis I of Hungary) as his successor. In exchange, the szlachta's tax burden was reduced and they would no longer be required to pay for military expeditions expenses outside Poland. Those important concessions would eventually lead to the ultimately crippling rise of the unique nobles' democracy in the Polish-Lithuanian Commonwealth.

Marriages and the Problem of an Heir

Kazimierz's life-long goal was to father a male heir. His first wife was Anna, or Aldona Ona, the daughter of the prince of Lithuania, Gediminas. By Anna, he fathered proncess Cunigunda (d. 1357), who married Louis VI the Roman, the son of Louis IV, Holy Roman Emperor, and Elisabeth, who married Duke Bogislaus V of Pomerania. Kazimierz then married Adelheid of Hessen while still married to Anna, thus entering a bigamous relationship such was his desire for a male heir. He divorced Adelheid in 1356 and married a lady named Christina, whom he also later divorced around about 1365 to marry Jadwiga of Glogow and Sagan. His three daughters by his fourth wife were very young and regarded as of dubious legitimacy because of their father's bigamy. By an unfortunate statistical fluke, all of the five children he fathered with his first and fourth wife were daughters, so he was unable to produce a lawful male heir to his throne.

His second daughter, Elisabeth, Duchess of Pomerania, bore a son in 1351, named Kazimierz of Pomerania after his maternal grandfather. He was heir-presumptive but did not succeed to the throne, dying childless in 1377, seven years after King Kazimierz. He was the only male descendant of King Kazimierz who lived during his lifetime.

Kazimierz's son-in-law, Louis of Bavaria-Brandenburg, was thought to be a possible successor. However, he was not deemed very capable, and his wife had died in 1357, without children.

Kazimierz had no sons. Apparently he regarded his own descendants either unsuitable or too young to inherit. Thus, and in order to provide a clear line of succession and avoid dynastic uncertainty, he arranged for his sister Elisabeth, Dowager Queen of Hungary, and her son Louis king of Hungary to be his successors in Poland. Louis was proclaimed king on Kazimierz's death in 1370, and Elisabeth held much of the real power until her death in 1380. This brought Poland into what was called a personal union with Hungary, since Louis was king of both countries. Ironically, Kazimierz had done much to secure Poland's independence during his life.

Many of the influential lords of Poland were unsatisfied with the idea of any personal union with Hungary, and twelve years after Kazimierz's death, (and only a couple of years after Elisabeth's), they refused in 1382 to accept the succession of Louis's eldest surviving daughter Mary (Queen of Hungary) in Poland too. They therefore chose Mary's younger sister, Hedvig, as their new monarch, and she became "King" (Queen Regnant) Jadwiga of Poland, thus restoring Polands's independence.

King Kazimierz was favorably disposed toward Jews. On October 9, 1334, he confirmed the privileges granted to Jewish Poles in 1264 by Boleslaus V. Under penalty of death, he prohibited the kidnapping of Jewish children for the purpose of enforced Christian baptism. He inflicted heavy punishment for the desecration of Jewish cemeteries. He invited Jews who were being persecuted elsewhere to settle in Poland, protecting them as 'people of the king'

Kazimierz's treatment of Jews and also of Polish peasants was unusually just and fairminded at the time. This enabled centers of Jewish learning such as at Kraków and Poznań to flourish in Poland through until World War II. As much as 50 percent of the world's Jewish population would live in Poland. The Hasidic tradition would develop there. Before Kazimierz's reign, Poland was more or less a client state of surrounding powers. Although his failure to produce an heir resulted in a temporary union with Hungary, his legacy nevertheless left behind a stronger and much more viable nation. Poland, though, would continue to find it difficult to maintain independence from her more powerful neighbors and, in the future, would lose territory and sovereignty to Russia, Prussia and Austria. However, the Polish people would develop great pride in their own identity and even when subject to foreign domination they never abandoned their loyalty to the Polish state nor their desire for independence. Kazimierz III can properly be described as the father of the Polish nation.