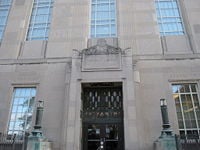 Blegen Library at the University of Cincinnati.

Carl William Blegen (January 27, 1887 – August 24, 1971) was an American archaeologist famous for his work on the site of Pylos in modern-day Greece and Troy in modern-day Turkey. His work produced numerous artifacts, including tablets with inscriptions in the Linear B script previously discovered only in Crete, as well as a magnificent Mycenaean palace at Pylos. Blegen's work at the Troy site initially suggested that the city had been destroyed by natural disasters, contradicting the account in Homer's Iliad. His further research, however, identified the Troy of approximately 1250 B.C.E., which was destroyed by fire and also contained evidence of extensive warfare, as King Priam's Troy, validating Homer's epic. Blegen, thus, contributed greatly to our understanding of these ancient cultures, previously remembered only in literature.

Carl William Blegen was born in Minneapolis, Minnesota on January 27, 1887, the son of John H. and Anna Blegen, Norwegian immigrants. His father was a professor in German and Greek at Augsburg College in Minneapolis, and his mother had been a successful businesswoman before their marriage. Carl had two sisters and three brothers, one of whom, Theodore, became a noted historian specializing in immigration history particularly of Norwegian Americans.

His childhood was spent in the scholarly community not only of his immediate family but supplemented during vacations in the extension of the Augsburg faculty community at Lake Minnetonka, called Saga Hill. His background thus prepared him for a scholarly career.

Carl earned his bachelor's degree from the University of Minnesota in 1904 and started graduate studies at Yale University in 1907. He became a fellow (1911–1913) at the American School of Classical Studies in Athens, Greece. It was during this time that Blegen worked on excavations at Locris, Corinth, and Korakou.

When World War I broke out in Europe, Blegen became involved in relief work in Bulgaria and Macedonia, for which he received the Saviors Order from Greece in 1919. Following the war, he returned to United States to complete his Ph.D. at Yale (1920). He then became an assistant director of the American School of Classical Studies, Athens in 1920, carrying that duty until 1926. During that period he led excavations at Zygouries, Phlius, Prosymna, and Hymettos.

In the summer of 1924 he married Elizabeth Denny Pierce in Lake Placid, New York, a fellow archaeologist whom he had met in Greece. She became an indispensable partner in his work.

In 1927, Blegen joined the faculty of the University of Cincinnati, becoming a professor of classical archaeology. He remained in that position for the next 30 years, until his retirement in 1957. During that period he directed the university's excavations of the mound of Hisarlik, the site of Troy, from 1932 to 1938. They were followed by those at the palace of Nestor in Pylos, Greece in 1939, and resumed from 1952 to 1958.

Carl Blegen was absolutely convinced that Homer’s Iliad was based on historical facts, and that the Trojan War indeed took place in the legendary city of Troy. In 1932, he began excavations at the Hisarlik site, previously excavated by Heinrich Schliemann (1871–1873 and 1878–1879) and Wilhelm Dorpfeld (1893–1894) in 1932, and continued for seven years. He was able to separate remains from different time periods, starting with Troy I and II dating from the Bronze Age period. He isolated a total of 47 strata of Troy, and placed them in chronological order. He also photographed and mapped the area, this being the first time that somebody did that for the Troy I and II sites.

The excavations on the Troy VI site revealed that the destruction of its walls was the result of a natural disaster, rather than a war. This claim was in direct contrast to the claim of Wilhelm Dorpfeld, who argued that Agamemnon’s army destroyed Troy at the time of King Priam, as described in Homer’s Iliad. However, Blegen found no evidence for that at Troy VI. Instead, Blegen found evidence of war at the site of Troy VII, which he claimed to be the original Homeric Troy. In that location he found remnants of the residential style of living, together with human bones and arrowheads scattered around the location. The city appeared to have been destroyed by fire.

In 1939, Blegen discovered another extraordinary find. It was a clay tablet inscribed in Linear B, an undeciphered script found on Crete, but never before seen on the Greek mainland. Blegen managed to uncover dozens more of these tablets, and decipher the script. The text revealed that the site was once a palace, and that its inhabitants wrote in an early form of Greek. Blegen argued that the palace was legendary Pylos, described in Homer’s Iliad, and Nestor was its king.

Blegen’s claims were initially well-received by the scientific community of his day. His excavation methods and precise documentation of his findings resonated well among archaeologists. However, his critics argued that many of Blegen’s claims were based on pure speculation without objective evidence.

Carl Blegen's work was significant both in terms of its rich archaeological findings of artifacts from ancient Greek civilizations, and in clarification of the myth surrounding Homer's Iliad. His excavations of Troy, and later Pylos, found additional evidence of the historical accuracy of the epic. Additionally, his findings of Mycenaean culture, including tablets inscribed in the early Greek script called Linear B, were significant contributions to scientific knowledge of these past people's lives.

The library at the University of Cincinnati was rededicated in honor of Carl Blegen in 1983.