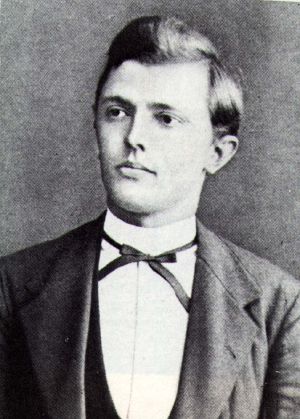 Wilhelm Dörpfeld (or Doerpfeld) (December 26, 1853 – April 25, 1940) was a German architect and archaeologist, the pioneer of stratigraphic excavation and precise graphical documentation of archaeological projects. He is famous for his work on Bronze Age sites around the Mediterranean, such as Tiryns and Hisarlik (the site of the legendary city of Troy) where he continued Heinrich Schliemann's excavations. Like Schliemann, Dörpfeld was an advocate of the historical reality of places mentioned in the works of Homer.

While the details of his claims regarding locations mentioned in Homer's writings are not considered accurate by later archaeologists, his fundamental idea that they correspond to real places is accepted. Thus, his work greatly contributed not only to scientific techniques and study of these historically significant sites but also renewed public interest in the culture and mythology of ancient Greece.

Wilhelm Dörpfeld was born in Barmen, Wuppertal, in today’s Germany, the son of Christine and Friedrich William Dörpfeld. His father, a convinced Evangelist Christian and a famous pedagogue, tried to bestow deep religious sentiment to his family, so Dörpfeld attended religious schools, where he received basic education in Latin and Greek. He graduated from Barmer High School in 1872, the year after his mother died.

In 1873 Dörpfeld enrolled in architectural studies in Berlin, into the famous Academy of Architecture (Bauakademie). At the same time he started to work for the Bergisch-Maerki industrial company. His father could not finance his studies, and so Dorpfeld’s sister Anna loaned him money. During holiday breaks, Dörpfeld worked for the Rheine railway company, drawing sketches of buildings and different architectural objects. Dörpfeld graduated with honors in 1876.

In 1877, Dörpfeld became an assistant at the excavations of Olympia, Greece, conducted under Richard Bohn, Friedrich Adler, and Ernst Curtius. He later became the technical manager of the project. The group uncovered, among other artifacts, an intact statue of Hermes of Praxiteles, and the great altar of Pergamon. The excavations revived the memory of the ancient Olympic Games and contributed toward the establishment of modern Olympics, in 1896.

After his return from Olympia, Dörpfeld intended to take his architectural exam and settle down in Berlin. He needed a permanent source of income, as he prepared for the family life. He married in February 1883, to Anne Adler, the daughter of his university professor Friedrich Adler. The couple had three children. Around the same time, he met Heinrich Schliemann, who persuaded him to join his archaeological expedition.

In 1882 Dörpfeld joined Schliemann, who was then excavating Troy. The two eventually became good friends and continued their collaboration on other projects as well. They excavated in Tiryns, from 1884 to 1885, and at Troy again from 1888 to 1890. Dörpfeld also excavated at the Acropolis of Athens from 1885 to 1890, where he unearthed the Hekatompedon (the pre-Classical Parthenon). He continued excavations at the Pergamon (1900-1913, with Alexander Conze), and in the 1931 in the Agora of Athens.

In the year 1886 Dörpfeld founded the German School of Athens, which is later named after him, the Dörpfeld Gymnasium. From 1887 to 1912 he was the director of the German Archaeological Institute in Athens. He published, in 1896, Das griechische Theater, which was the first study of Greek theater construction.

After his retirement in 1912, Dörpfeld engaged in numerous academic debates on different archaeological topics. For example, in the mid-1930s he took part in a celebrated debate with American archaeologist William Bell Dinsmoor on the nature of configuration of the three phases of the Parthenon. At the beginning of the 1920s, he started to lecture at the University of Jena, but was not satisfied with teaching as a profession and returned to Greece.

Dörpfeld died on April 25, 1940 on the island of Lefkada, Greece, where he had a house, believing that the the bay of Nidri on the eastern coast of Lefkada was the historical Ithaca, home of Odysseus in Homer's Odyssey. 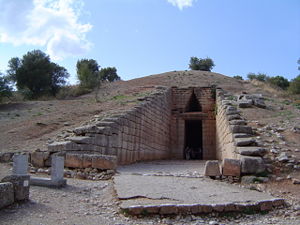 Wilhelm Dörpfeld developed a method of dating archaeological sites through the strata in which objects were found and the type of materials used for the buildings. He corrected many of Schliemann's previous conclusions, including the shaft burial sites at Mycenae. Dörpfeld realized that the site was a "tholos" tomb, and not the "Treasury of Atreus," as Schliemann claimed.

During the Kavvadias’ excavations, Dörpfeld was instrumental in correcting the previous belief that the temple of Athena, destroyed by the Persians in 480 B.C.E., was not beneath the Parthenon, but to the north of it. He suggested the three different structures build in the same place, speaking thus of Parthenon I, Parthenon II, and Parthenon III, applying the last term to the temple with which we are now familiar. Besides suggesting the existence of the two previous proto-Parthenons, he was able to reconstruct the dimensions of their ground plans. 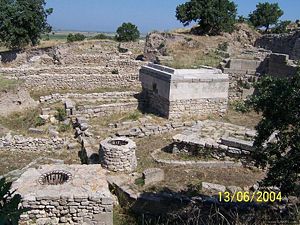 A view of the archaeological site of Troy

After Schliemann's death in 1890, his widow hired Dörpfeld to continue where Schliemann had stopped his excavations of Troy. Dörpfeld found nine separate cities, one atop the other, at the Hisarlik site. He argued that the sixth of these was the legendary Troy, because it was larger than the first five cities and had high limestone walls, surrounding the city. Dörpfeld also found evidence for his claims in Mycenaean pottery, which he found in the same strata. Modern archaeologists however, think that it was probably Troy VII that was the city Homer wrote about.

Dörpfeld spent a lot of time and energy trying to prove that Homer’s epics were based on historical facts. He proposed that the bay of Nidri, on the eastern coast of Lefkada, was Ithaca, home of Odysseus. Dörpfeld compared several passages from the Odyssey to the actual geographical location of Lefkada, and concluded that it must be the Homeric Ithaca. He was especially convinced by the passage:

I dwell in shining Ithaca. There is a mountain there,
high Neriton, covered in forests. Many islands
lie around it, very close to each other,
Doulichion, Same, and wooded Zacynthos—
but low-lying Ithaca is farthest out to sea,
towards the sunset, and the others are apart, towards the dawn and sun.
It is rough, but it raises good men." Homer, Odyssey 13.21-27:

Lefkada is today connected to mainland Greece by a causeway, although this was cut through by the Corinthians in the seventh century B.C.E. Modern geographers and hydrographers, however, have claimed that ancient Lefkada was an island. They noted that the causeway that connects it to the mainland today is a recent product of silting in the channel, and so Lefkada may have experienced varying degrees of connection with the mainland over the last few thousand years. Dörpfeld may have believed that Lefkada was a free standing island (or was regarded as such) at the time of Homer’s descriptions, in accordance with the above passage. Dörpfeld may also have felt that the difficulty of crossing the narrow causeway was referred to in Homer’s enigmatic and repeated jest, “For nowise, methinks, didst thou come hither on foot.” Homer, Odyssey 14.190, 16.59, 16.224.

William Dörpfeld was one of the seminal figures in classical archaeology. His stratigraphic method of dating archaeological sites based on the strata in which objects were found and the type of building materials remains at the core in archaeological site analyses. His excavations, however, had many flaws, and his seeking to prove that Homer based his Odyssey on real places, was rather romantic. His fellow archaeologists remarked that he overemphasized the importance of buildings in the dating of sites, and often neglected less visible artifacts, such as pottery. Dörpfeld however remains known as one who brought much order and integrity into archaeology, and one who saved many archaeological sites from Schliemann’s reckless excavations.