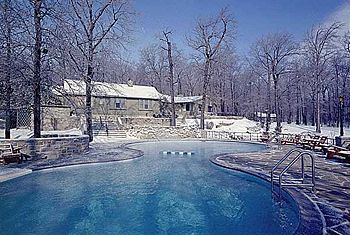 Main Lodge at Camp David during Nixon administration in 1971.

The Naval Support Facility Thurmont, popularly known as Camp David, is the rustic 125-acre mountain retreat of the President of the United States. Camp David is part of the Catoctin Mountain Park recreational area in Frederick County, Maryland, 60 miles north of Washington, D.C., about 20 miles southwest of Gettysburg, Pennsylvania, and about 15 miles east of Hagerstown, Maryland.

First known as Hi-Catoctin, Camp David was originally built as a camp for federal government employees and their families, by the Works Progress Administration (WPA), starting in 1935, opening in 1938. In 1942, it was converted to a presidential retreat by President Franklin D. Roosevelt and renamed Shangri-La. Camp David received its present name from Dwight Eisenhower, in honor of his grandson, Dwight David Eisenhower II.[1]

The Camp is very isolated and quiet. The compound consists of several cabins hidden throughout the woods, only connected by small, mulch walking paths. The cabins are all named after various trees, plants, and flowers.

In addition to being used as the President's personal retreat, Camp David has been the location of many international summit meetings and other gatherings of heads of state. Most famously, in 1978, it was the site of the signing of the Egyptian-Israeli peace agreement.

Located within Catoctin Mountain Park a half-hour helicopter ride from the nation's capital by Marine One, Camp David provides privacy and seclusion, along with opportunities for the president and his guests to engage in recreation, rest, and relaxation. Camp David has a pool, putting green, driving range, tennis courts, gymnasium, and guest cabins with such names as Dogwood, Maple, Holly, Birch, and Rosebud, after the surrounding foliage. The president's cabin is called Aspen Lodge.

Although the presidential retreat is closed to the public, the adjacent eastern hardwood forest in Catoctin Mountain Park offers camping, picnicking, fishing, 25 miles of hiking trails, nature exploration, and fine scenic views to the public. 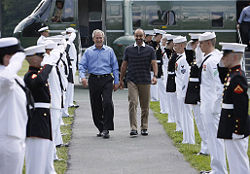 Camp David (Naval Support Facility Thurmont) is a United States Navy installation. The Camp is commanded by an officer with the rank of O-5 (Commanders Rank). Sailors stationed there are mostly Seabees, and most officers are in the civil engineering field. The Navy Seabee Detachment does maintenance and beautification. The sailors must attain "Yankee White" security clearance, the highest-level clearance in the Department of Defense (DOD). These sailors are hand-picked for their service at Camp David and represent the best of the U.S. Navy. The sailors' include: grounds and maintenance personnel, electricians, carpenters, corpsman, and the President's cooks (mess specialists).

The camp is reportedly one of the most secure facilities in the world, as reported by a Department of Defense journal in 1998. The facility is guarded by one of the United States Marine Corps' most elite units, MSC-CD (Marine Security Company, Camp David). Each Marine is selected from the infantry and sent through a battery of psychological and physical tests. He then must undergo specialized security training at the Marine Corps Security Forces School, in Chesapeake, Virginia. The Marines then report to Marine Barracks, Washington, D.C. Assuming the Marines successfully complete all their schooling, they still must, like their Navy counterparts, attain "Yankee White" security clearance. Only then will the Marines be eligible for the assignment at Camp David. After 12 months of service at Camp David, a Marine is awarded the Presidential Service Badge. Typically, tours at Camp David are 18-24 months. 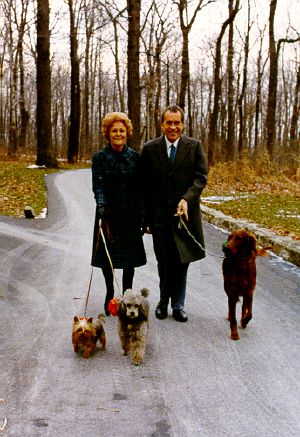 Originally purchased by the government in 1936, Catoctin Mountain Park was first intended as a recreational facility. Once developed under the New Deal's Works Progress Administration (WPA), the facility was to demonstrate how steep terrain and eroded soil could be transformed into productive land.

First used by the Maryland League for Crippled Children, "Camp Misty Mount" was found too difficult to negotiate in a wheelchair, so the League moved in 1938 to a new location, Camp Greentop. Camp Hi-Catoctin was completed in the winter of 1938-1939 and for three years was utilized as a family camp for federal employees. In 1939, the newly established Catoctin Recreational Demonstration Area was joined by the Civilian Conservation Corps (CCC). Ronald Reagan and Margaret Thatcher relax on a sofa at a Camp David lodge.

In 1942, the U.S. Secret Service was concerned about the president's continued use of the presidential yacht "Potomac," on which he relaxed on weekends and sought relief from hot Washington, D.C. summers. During World War II, German U boats ranged close in Atlantic waters, and both the president's safety, and his health—Washington, D.C.'s muggy climate affected his sinuses—were a concern. A new retreat in the cool mountain air was sought within a 100-mile radius of Washington, D.C. Several sites were considered, and Camp Hi-Catoctin was selected after the President's first visit on April 22, 1942. The estimated conversion cost of the camp then on the site was $18,650. Roosevelt quickly renamed the camp, which was ten degrees cooler than Washington, to "Shangri-La", from James Hilton's 1933 novel, Lost Horizon.

With the end of World War II, the future of Shangri-La was in doubt. Should it be returned to the National Park Service, maintained as a national shrine or monument, or transferred to the Maryland State Forest and Park System as was the original plan of the area? In 1952, President Harry S. Truman approved a compromise under which part of the land would be reserved as a presidential retreat, while the land north of Maryland Route 77 would remain Catoctin Mountain Park under by the National Park Service, and the land south of Maryland Route 77 would become Cunningham Falls State Park. The official transfer took effect in 1954. After he took office in 1953, President Dwight D. Eisenhower renamed the retreat "Camp David."

Camp David has been the site of a number of historic international meetings. It was at this presidential retreat where, during World War II, President Franklin Roosevelt and British Prime Minister Winston Churchill planned the Allies' invasion of Europe. Other historical events taking place at the camp have included Eisenhower-Khrushchev meetings, the Kennedy administration discussions planning the Bay of Pigs operation, Johnson administration high-level meetings dealing with the Vietnam War, and many other meetings with foreign dignitaries and guests. 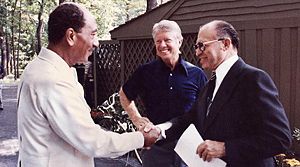 From left to right; Manchem Begin, Jimmy Carter, and Anwar Sadat during their historic 1978 Camp David summit resulting in the Camp David Accords.

United States President Jimmy Carter chose the site for the meeting of the leaders that led to the Camp David Accords between Israel and Egypt. The Camp David Accords were signed by Egyptian President Anwar Sadat and Israeli Prime Minister Menachem Begin on September 17, 1978, following 12 days of secret negotiations at Camp David. The agreements were signed at the White House, and were witnessed by President Carter. This represented the first diplomatic success in the effort to resolve the ongoing problems surrounding the creation of the State of Israel in 1947 following the initial war between Israel and its Arab neighbors. The 1967 Six Day War resulted with Israel extending its borders, occupying parts of Jordan, Syria, and Egypt; followed by the Yom Kippur War of 1973. This accord saw the first Arab state to recognize Israel and to normalize diplomatic and economic relations.

Since then, every U.S. president has found Camp David to be a useful setting for both international meetings, a place to meet intensively with staff, or just a relaxing escape from the stress of the White House. Ronald Reagan met Margaret Thatcher there to discuss their strategy to confront the "Evil Empire" of the Soviet Union. In 2000, President Bill Clinton brought together Israeli Prime Minister Ehud Barak and Palestinian Authority Chairman Yasser Arafat in an unsuccessful attempt to repeat the precedent of 1978. More recently, President George W. Bush has frequently used the retreat as a place to relax and work. He has also used the camp to entertain important international guests, including Japanese Prime Minister Shinzo Abe, Brazilian President Luiz Inácio Lula da Silva, Afghan President Hamid Karzai and South Korean President Lee Myung-bak, among others.