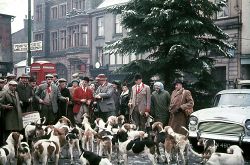 Fox hunting was a traditional activity on Boxing Day. Meet of the Blencathra Foxhounds in Keswick, 1962

Boxing Day is a secular holiday celebrated the day after Christmas Day. It originated in the United Kingdom and is celebrated in a number of countries that previously formed part of the British Empire. Boxing Day is on December 26, although the attached bank holiday or public holiday may take place either on that day or two days later. December 26 is also Saint Stephen's Day, a religious holiday.

Generally, Boxing Day is considered a day to spend with family and friends, for sports, and for eating the left over food from the Christmas Day feast. The traditional fox hunt was popular among both participants and spectators prior to the banning of this sport. The origin of the term "Boxing Day" is somewhat unclear. In Britain it is understood as referring to the custom of "Christmas Boxes," small gifts, usually cash, given to servants, employees, and working people as a token of gratitude for their hard work throughout the year.

The Oxford English Dictionary gives the earliest attestations from Britain in the 1830s, defining Boxing Day as "the first weekday after Christmas day, observed as a holiday on which postmen, errand boys, and servants of various kinds expect to receive a Christmas box."[1]

The term "Christmas box" dates back to the seventeenth century, and among other things meant:

A present or gratuity given at Christmas: in Great Britain, usually confined to gratuities given to those who are supposed to have a vague claim upon the donor for services rendered to him as one of the general public by whom they are employed and paid, or as a customer of their legal employer; the undefined theory being that as they have done offices for this person, for which he has not directly paid them, some direct acknowledgement is becoming at Christmas.[2]

In Britain, it was a custom for tradesmen to collect "Christmas boxes" of money or presents on the first weekday after Christmas as thanks for good service throughout the year. This is mentioned in Samuel Pepys' diary entry for December 19, 1663.[3] This custom is linked to an older British tradition where the servants of the wealthy were allowed the day to visit their families since they would have to serve their masters on Christmas Day. The employers would give each servant a box to take home containing gifts, bonuses, and sometimes leftover food. Until the late twentieth century there continued to be a tradition among many in the UK to give a Christmas gift, usually cash, to those who delivered letters, newspapers, milk, and the like. This might not actually take place on Boxing Day, but rather during the week before or after, as many would not work on that day.

The European tradition of giving money and other gifts to those in need and in service positions has been dated to the Middle Ages, but the exact origin is unknown. It is believed to be in reference to the Alms Box placed in areas of worship to collect donations to the poor. The tradition may come from a custom in the late Roman/early Christian era wherein metal boxes placed outside churches were used to collect special offerings tied to the Feast of Saint Stephen,[4] which in the Western church falls on the same day as Boxing Day.

Boxing Day is a public holiday, a day off for the general population, and schools and most businesses are closed. It is a day to relax with family and friends without the pressures of the Christmas Day festivities or the need to go to work. Leftover food from the Christmas feast is enjoyed and a variety of entertainment and activities are available. 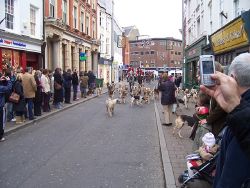 Boxing Day in Tiverton. People lined the street to watch as the hounds and horses passed through 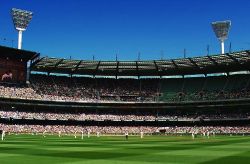 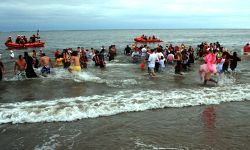 Many sporting activities are commonly associated with Boxing Day, from fox hunting to football (soccer), horse racing, and cricket, and even swimming in the ocean.

Boxing Day traditionally was one of the main days in the fox hunting calendar, with most hunts (both mounted foxhound or harrier packs and foot packs of beagles or bassets) holding meets, often in town or village centers.[5] The sport was banned in 2002 in Scotland and 2004 in England and Wales. After the ban on fox hunting, hunts follow artificially laid trails. There are exemptions laid out in the Act, such as dogs are allowed to follow a scent but not to be used to kill the fox. Traditional fox hunting remains lawful in Northern Ireland. Despite the restrictions, it was reported that around 320,000 people (their highest recorded number) turned up to meets on Boxing Day in 2006.[6]

In horse racing, there is the King George VI Chase at Kempton Park Racecourse in Surrey, England. It is the second most prestigious chase in Britain, after the Cheltenham Gold Cup. In addition to the prestigious race at Kempton, in Britain, it is usually the day with the highest number of racing meetings of the year, with eight in 2016, in addition to three more in Ireland. In Barbados, the final day of horse racing is held on Boxing Day at The Historic Garrison Savannah, a UNESCO world heritage site. This tradition has been going on for decades in this former British colony.

In the United Kingdom, it is traditional for all top-tier football (soccer) leagues in England, Scotland, and Northern Ireland – the Premier League, the Scottish Premiership, and the NIFL Premiership – and the lower ones, as well as the rugby leagues, to hold a full program of matches on Boxing Day. Originally, matches on Boxing Day were played against local rivals to avoid teams and their fans having to travel a long distance to an away game on the day after Christmas Day.[7] Prior to the formation of leagues, a number of traditional rugby union fixtures took place on Boxing Day each year, notably Llanelli v London Welsh and Leicester v The Barbarians.

In rugby league, festive fixtures were a staple of the traditional winter season. Since the transition to a summer season in the 1990s, no formal fixtures are now arranged on Boxing Day but some clubs, such as Wakefield Trinity, arrange a traditional local derby friendly fixture instead.

In Australia, New Zealand, and South Africa, Test cricket matches are played on Boxing Day. The Boxing Day Test match held in Melbourne, Australia involves the Australian cricket team and an opposing national team that is touring Australia during the southern summer.[8]

The start of the Sydney to Hobart Yacht Race in Australia is also on Boxing Day.[9]

Several ice hockey contests are associated with the day. For example, the IIHF World U20 Championship typically begins on December 26.

In some African Commonwealth nations, particularly Ghana, Uganda, Malawi, Zambia, and Tanzania, professional boxing contests are held on Boxing Day. This practice has also been followed for decades in Guyana and Italy.[10]

A notable tradition in Sweden is Annandagsbandy, which formerly marked the start of the bandy season and always draws large crowds. Games traditionally begin at 1:15 pm.[11] 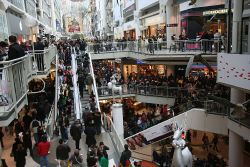 In the UK,[12] Canada, Australia, Trinidad and Tobago, and New Zealand,[13] Boxing Day is primarily known as a shopping holiday, much like Black Friday (the day after Thanksgiving) in the United States. Boxing Day sales are common and shops often allow dramatic price reductions. For many merchants, Boxing Day has become the day of the year with the greatest revenue. In the UK in 2009 it was estimated that up to 12 million shoppers appeared at the sales.[14]

Many retailers open very early (typically 5 am or even earlier) and offer doorbuster deals and loss leaders to draw people to their stores. It is not uncommon for long queues to form early in the morning of December 26, hours before the opening of shops holding the big sales.

In some areas of Canada, particularly in Atlantic Canada and parts of Northern Ontario, most retailers are prohibited from opening on Boxing Day, either by provincial law or by municipal bylaw, or by informal agreement among major retailers, in order to provide a day of relaxation following Christmas Day. In these areas, sales otherwise scheduled for December 26th are moved to the 27th.[15] The city council of Greater Sudbury, Ontario, which was the largest city in Canada to maintain this restriction as of the early 2010s, formally repealed its store hours bylaw in 2014.[16]

Boxing Day is not, and has never been, a shopping holiday in the USA. However, December 26 often starts many U.S. retailers' after-Christmas sales. It is also the earliest starting day after Christmas for people to returning unwanted gifts for exchanges or refunds.

In Scotland, Boxing Day has been specified as an additional bank holiday since 1974, by Royal Proclamation under the Banking and Financial Dealings Act 1971.[17]

In Ireland, when the entire island was part of the United Kingdom, the Bank Holidays Act 1871 established the feast day of Saint Stephen as a non-moveable public holiday on 26 December.[18] Following partition in 1920, Northern Ireland reverted to the British name, Boxing Day. In East Donegal and Inishowen, the day is also popularly known as Boxing Day.

In New Zealand, Boxing Day is a statutory holiday, one of four public holidays over the Christmas and New Year period.[19]

In South Africa, Boxing Day is a public holiday. Many South Africans spend the day at the beach. In South Africa as recently as the 1980s, vendors who normally had little interaction with those they served were accustomed to knock on their doors asking for a "Christmas box", being a small cash donation, in the weeks before or after Christmas.

In Nigeria, Boxing Day is a public holiday for working people and students. When it falls on a Saturday or Sunday, there is always a holiday on Monday.[20]

In Trinidad and Tobago, Boxing Day is a public holiday. 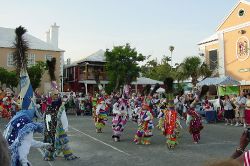 In the British overseas territory of Bermuda, the costumed Gombey dancers perform throughout the mid-Atlantic island on Boxing Day, a tradition believed to date back to the eighteenth century when slaves were permitted to gather at Christmastime.[21]

In Singapore, Boxing Day was a public holiday for working people and students; when it fell on a Saturday or Sunday, there was a holiday on Monday. However, in recent years this tradition has ceased in Singapore.

In Hong Kong, despite the transfer of sovereignty from the UK to China in 1997, Boxing Day continues to be a public holiday.[22] If Boxing Day falls on a Sunday, a compensation day is given on the next weekday.

In some European countries such as Romania, Hungary, Germany, Poland, the Netherlands, the Czech Republic, and Scandinavia, December 26 is celebrated as a Second Christmas Day.[23]

Retrieved from https://www.newworldencyclopedia.org/p/index.php?title=Boxing_Day&oldid=1095084
Categories:
Hidden category:
This page was last edited on 12 January 2023, at 01:58.
Content is available under Creative Commons Attribution/Share-Alike License; additional terms may apply. See Terms of Use for details.