Bimbisara (ruled 544-491 B.C.E.) was a king of the Magadha empire and belonged to Haryanaka dynasty, which ruled until approximately 326 B.C.E. when Alexander the Great invaded India. He ruled an area of what is now Bihar and Bengal with his capital at modern day Rajgir. In Buddhist sources, he is recorded as having been a close friend of King Suddhodana, father of Siddhartha Gautama, the historical Buddha. He and his son, Ajatashatru, became patrons of Buddhism. He is also said to have been a friend of Mahavira, or Jina, the great teacher of the Jain tradition.

Bimbisara was 15 when he became king and 52 when he was murdered. He expanded his territory but also enjoyed peaceful relations with most if not all of his peers. He is legendary for the justness of his rule and for his spirit of generosity. It is possible that, without the royal patronage provided by Bimbisara, the Buddha might have been killed (there were several attempts on his life) or that Buddhism would not have spread as successfully as it did. Some of those who opposed the Buddha said that he tricked people into following him. Opposition tended to stem from his rejection of some commonly accepted religious and philosophical dogmas and because there was no place for privilege of birth or of wealth in his system. There is little doubt that Bimbisara played no small role in helping to give the gift of Buddha's teaching to the world.

Later, Ashoka the Great would take royal patronage of Buddhism a step further by renouncing military expansion. Bimbisara may have laid two foundations on which Ashoka could build—a territory that provided the basis of the larger Mauryan empire that Ashoka inherited, and the survival of the faith that Ashoka, like Bimbisara, embraced.

Bimbisara was the son of Bhattiya, a chieftain. He ascended to throne at the age of 15 in 543 B.C.E.[1] He established the Haryanka dynasty and laid the foundations of Magadha with the fortification of a village, which later became the city of Pataliputra.[2] 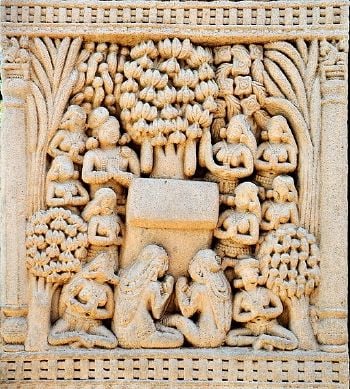 Bamboo garden (Venuvana) at Rajagriha, the visit of Bimbisara

Bimbisara's first capital was at Girivraja (identified with Rajagriha). He led a military campaign against Anga, perhaps to avenge his father's earlier defeat at the hands of its king, Brahmadatta. The campaign was successful, Anga was annexed, and prince Kunika (Ajatashatru) was appointed governor at Champa.[3] His conquest of Anga gave Magadha control over the routes to the Ganges Delta, which had important ports that gave access to the eastern coast of India.[4] Pukkusati, the king of Gandhara, sent Bimbisara an embassy.[1]

Bimbisara used marriage alliances to strengthen his position. His first wife was the sister of Prasenajit, king of Kosala. His bride brought him Kashi, which was then a mere village, as dowry. This marriage also ended the hostility between Magadha and Kosala and gave him a free hand in dealing with the other states. Bimbisara's second wife, Chellana, was a Lachchhavi princess from Vaishali and a relative of Mahavira's mother. His third wife was a daughter of the chief of the Madra clan of Punjab. Bimbisara is said to have enjoyed friendly relations with all his contemporary peers.

Bimbisara and the Buddha 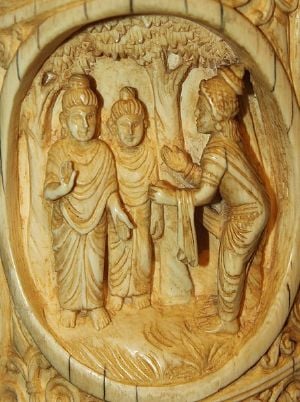 There are many accounts of Bimbisara in the Buddhist Jatakas (one of the three scriptures of the Pali canon), since he was a contemporary of Gautama Buddha. Before Siddhartha attained enlightenment but while he was practicing ascetism, he is said to have arrived at the gates of Bimbisara's city, Rajagaha, where he went begging food from door to door. No one called him 'prince' but as soon as King Bimisara saw him, he recognized him as Suddhodana's son, a prince. Assuming that the prince must have quarreled with his father, the king invited him to stay and to accept half of his kingdom. Siddhartha replied that it was because he loved his wife, his son, his parents, King Bimbisara, and everyone else that he had to continue his search for the way to stop old age, suffering, and death. He promised that when he has achieved this he would return and teach the king.

After his Enlightenment, the Buddha did return, this time with a large number of disciples. Hearing of this, Bimbisara, now about 30 years old and five years younger than the Buddha, went out of the city to greet the now famous teacher. Some of the subjects of the king were uncertain which of the visiting monks was actually the Buddha, mistaking one of his disciples for him. That disciple immediately pointed to the real Buddha, who started to teach. King Bimbisara, so the story goes, attained then and there the first stage of awakening and became the Buddha's first royal patron.[6] He fed the Buddha and the disciples and presented them with his own pleasure garden or park, Veluvana, where they could stay as long as they liked.

For the rest of his life, Bimbisara would take the eight precepts of the Uposatha for six days each month. His capital was the location of the first Convocation, or Buddhist Council, convened after the Buddha's death. The Pali or Buddhist canon was determined at this Council. Bimbisara's wife, Khema, became the Buddha's first female convert. Taking her precepts as a nun, or bhikkhuni, she was later described by the Buddha as a perfect disciple. On one occasion, she answered questions posed by another local king exactly as the Buddha had answered the same questions, although she was unaware of his reply. She was known as "Khedma of Great Wisdom."

Bimbisara frequently visited Samavasarana of Lord Mahavira seeking answers to his queries, such as asking about the Ramayana.[7]

Per Jain scripture, Bimbisara killed himself in a fit of passion, after his son had imprisoned him. Consequently, he was reborn in hell, where he is currently residing, until the karma which led to his birth there comes to an end.[8]

Jains say that because of Bimbisara's friendship with Mahavira, he will himself be a Tirthankara (a fully realized being) in the next cycle of existence. It is written that he will be reborn as Mahapadma (sometimes called Padmanabha), the first in the chain of future tirthankaras who are to rise at the beginning of the upward motion (Utsarpini) of the next era of time.[8]

Tradition tells us that Bimbisara was imprisoned by his son Ajatashatru who is said to have starved him to death. This is reported to have taken place around 492 B.C.E. Bimbisara's murder resulted in a war between the king of Kosala, on behalf of his grieving daughter, and Ajatashatru. Eventually, a peace treaty ended the war. The treaty was sealed by another marriage between the two dynasties, this time between the King of Kosala's daughter and Ajatashatru. At a mid-point in the hostilities, the Buddha gave wise counsel:

Losing, one lies down in pain.
The calmed lie down with ease,
having set
winning & losing
aside.

Ajatashatru further expanded the Kingdom. He also engaged in a 16-year long war against the Vriji to the far North of the Sub-continent. Ironically, perhaps, he was also a patron of Buddhism, continuing his father's example.