The festival began at the beginning of the Cold War, in the city of Berlin divided after World War II. Over the years it developed from a “showcase of the free world” into a place of intercultural exchange for the whole world. Supporting innovation in all aspects of film making, the festival ranges from classic narrative forms to contemporary aesthetically and structurally daring works from contemporary filmmakers, including up and coming youngsters inspired to create works that reflect their unique cultural background. While there is an important element of competition, as film makers seek to win the coveted Golden Bear award, the festival functions primarily as a celebration of the art of film for the public as well as those involved in the business of film making. It provides a forum for the exchange of ideas and technical developments and thus contributes to the creation of films that entertain, inspire, and educate regarding current social issues. The festival has been held every February since 1978 and is now considered one of the "Big Three" festivals, alongside the Venice Film Festival in Italy and the Cannes Film Festival in France.[1] With tens of thousands if visitors attending each year, it is one of the largest film festivals in the world. About 400 films are shown in several sections across cinematic genres. Around twenty films compete for the festival's top awards, the Golden Bear and several Silver Bears.

During the peak of the Cold War in 1950, Oscar Martay, a film officer of the Information Service Branch of the American High Commissioner for Germany stationed in Berlin, proposed the idea of a film festival in Berlin.[2] The proposal was put through a committee, which included members of the Senate of Berlin and people from the German film industry, on 9 October 1950. Through his efforts and influence, the American military administration was persuaded to assist and to give loans for the first years of the Berlin International Film Festival, which commenced in June 1951. Film historian Dr. Alfred Bauer was the festival's first director, a position he would hold until 1976.[3]

Alfred Hitchcock's Rebecca opened the first festival at the Titiana-Palast in Steglitz on June 6, 1951. The festival ran from June 6 to 17, with Waldbühne being another festival venue.[3]

The FIAPF (Fédération Internationale des Associations de Producteurs de Films) prohibited the awarding of prizes by an expert jury, which is reserved for "A-status" accredited festivals, so between 1952 and 1955 the winners of the Golden Bear were determined by the audience members.[3] In 1956, FIAPF formally accredited the festival and since then the Golden Bear has been awarded by an international jury.[5]

During the Cold War, a selection of the films were also screened in East Berlin.[6]

The 20th Berlin International Film Festival in 1970 was cut short and awards not issued following controversy over the showing of Michael Verhoeven's anti-war film o.k..[7] The jury, headed by American film director George Stevens, decided after a 7–2 vote to remove the film from the competition, justifying their decision by citing a FIAPF guideline that said: "All film festivals should contribute to better understanding between nations." Stevens claimed that the film, which includes a gang rape of a Vietnamese woman by American soldiers during the Vietnam War, was anti-American.[8] One jury member, Dušan Makavejev, protested against this measure, standing up for the film and supporting Verhoeven and producer Rob Houwer.[9] Verhoeven defended his film by stating in these terms: "I have not made an anti-American film... The biggest part of the American people today is against the war in Vietnam".[10] Other directors taking part in the festival withdrew their films in protest, and the jury was accused of censorship and eventually disbanded, so no prizes were awarded and the competition was suspended.[11]

This scandal had such a major impact that the future of the festival was in doubt. Festival director Alfred Bauer resigned and it was clear that the festival needed to take a new direction if it was to continue.[9] Bauer returned and the following year, the festival was re-formed and a new International Forum for New Cinema was created.[12]

Wolf Donner took over the directorship in 1976, and he gave German films higher priority.[13] After his first Berlinale in June 1977, Donner successfully negotiated the shift of the festival from the June to February (February 22 – March 5, 1978), a change which has remained ever since.[8]

The 28th Festival, held in 1978, saw the jury award the Golden Bear to Spain for its contribution to the festival rather than a specific film.[7] The three Spanish films which were screened at the festival and won were short film Ascensor directed by Tomás Muñoz and feature films La palabras de Max by Emilio Martínez Lázaro and Las truchas by José Luis García Sánchez.[14] The 1978 festival also saw the start of the European Film Market. 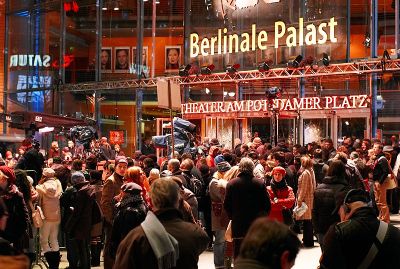 Berlinale Palast (aka Theater am Potsdamer Platz, main venue since 2000

After only three years in the role, Donner was followed by Moritz de Hadeln, who held the position from 1980[15] until director Dieter Kosslick took over in 2001.[16]

A new Series section, devoted to longform television series, was introduced in 2015.[17]

In June 2018, it was announced that Mariette Rissenbeek would serve as the new executive director alongside artistic director Carlo Chatrian. They assumed their posts after Kosslick's final edition in 2019. Rissenbeek became the first woman to lead the Berlinale.[18][19]

A shortened 71st festival took place virtually in March 2021, due to the COVID-19 pandemic. An open air summer event took place as well in June.[20][21] 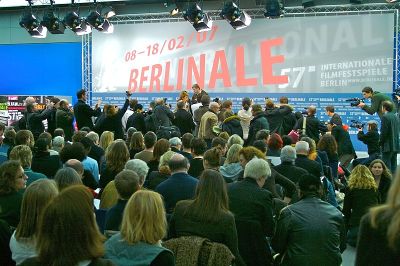 Conference after a screening

The festival is currently composed of nine different sections:[22]

The Golden Bear (Goldener Bär) is the highest prize awarded for the best film at the Berlin International Film Festival. In its first year in 1951 there were five winners of the Golden Bear, divided by categories and genres, awarded by a German jury.[31]

From 1952 to 1955 the Golden and Silver Bears (Silberner Bär) were awarded by audience voting, as the FIAPF had determined after the first festival that only Cannes and Venice Film Festivals were allowed to appoint official juries.[32] In 1956, the Fédération Internationale des Associations de Producteurs de Films formally accredited the festival, and since then, the Golden Bear and various Silver Bears have been awarded by an international jury.[5] Since 1956, the main prizes in the festival, which today include the Golden Bear and various Silver Bears, are those awarded by the international jury.[34]

The statuettes awarded as trophies are based on the Bär first created by sculptor Renée Sintenis (1888–1965) in 1932. The bear, based on the coat of arms of Berlin and depicting a bear standing on its hind legs with its arms raised, became popular in the 1930s, bringing wealth to Sintenis. Since the 3rd Festival in 1953, replicas of the bear have been produced by the Noack Foundry.[35][36]

The Golden Bear (German: Goldener Bär) is the highest prize awarded to the producers of the best feature film.[34]

The statuette shows a bear standing on its hind legs and is based on the 1932 design by German sculptor Renée Sintenis of Berlin's heraldic mascot that later became the symbol of the festival. The original award was redesigned in 1960.[37]

The bear is 20 centimeters (7.9 in) high and is fixed onto a base where the winning name is engraved. The figurine consists of a bronze core, which is then plated with a layer of gold. The total weight of the award is 4 kilograms (8.8 lb).[38] 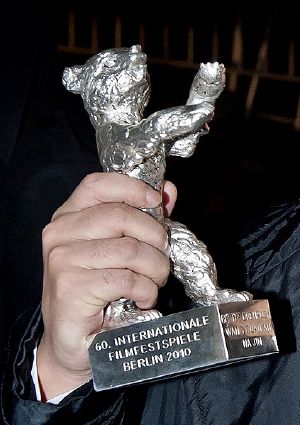 The Silver Bear statuette is cast the same as the Golden Bear, but plated in silver instead of gold.[38] The categories of Silver Bear awards are:[34]

The Honorary Golden Bear has been awarded for lifetime achievement since 1982, when it was awarded to James Stewart.[39] It is presented to someone with an exceptional artistic career, and is given to the guest of honor of the Homage section[40] which has been run since 1977 by the Berlinale and the Deutsche Kinemathek – Museum für Film und Fernsehen.[30]

Awards for short films are awarded by a separate international short film jury consisting of three filmmakers and artists. The short film award are:[41]

There are also awards given by separate juries or via other routes at the Berlinale. These include:

There are also many other prizes given by independent juries (not connected to the Berlinale) at the event. For example, the Shooting Stars Award for young European acting talent is independently awarded by European Film Promotion at Berlinale Palast.[43] 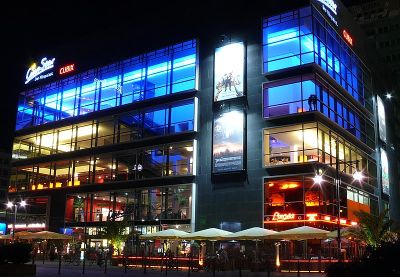 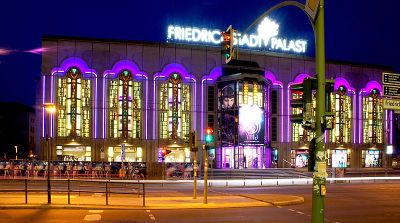 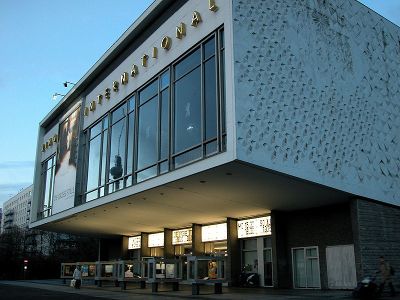 The Theater am Potsdamer Platz, a theatre for musicals which is known as the Berlinale Palast during the festival, is the venue for the premieres of Competition film and several Special Gala films, as well as the opening and awards ceremonies.[45]

The CinemaxX Potsdamer Platz, which has 19 screens, has been the main Berlinale screening cinema since 2000, two years after its opening in 1998.[46]

Other venues for the festival include or have included the following:[47] 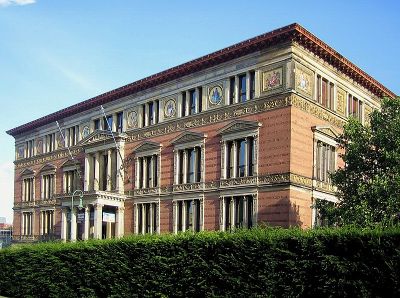 The European Film Market (EFM), a film trade fair held simultaneously to the Berlinale, is a major industry meeting for the international film circuit. The trade fair serves distributors, film buyers, producers, financiers and co-production agents and has grown into one of three largest movie markets in the world. It is the first film market of the year.[60]

Commencing in 2003, the Berlinale has partnered with the Berlinale Talents (previously Berlinale Talent Campus), which is a winter school for "up-and-coming filmmakers" that takes place at the same time as the festival. A week-long series of lectures and workshops, it features lectures and panel discussions with well-known professionals addressing issues in filmmaking. Workshops, excursions, personal tutoring, coaching, and training of participants from different fields of work are part of the program.[61]

The Berlinale Co-Production Market is a five-day networking platform for producers and financiers, as well as broadcasting and funding representatives who are participating in international co-productions.[62]

The World Cinema Fund (WCF) was established by Dieter Kosslick in 2004. It is associated with the Berlinale to provide financial support to feature film projects in countries in countries with weak film infrastructure thereby helping strengthen the regions’ position on the international film market.[63]

The WCF is a collaboration with the Federal Foundation for Culture, and awarded in cooperation with the Goethe Institute, the Foreign Ministry and German producers. It aims "to develop and support cinema in regions with a weak film infrastructure, while fostering cultural diversity in German cinemas."[64] It provides funding for production and distribution of feature films and feature-length documentaries, with a focus on countries in Latin America, Central America, the Caribbean, Africa, the Middle East, Central Asia, Southeast Asia, and the Caucasus, as well as Bangladesh, Nepal, Mongolia, and Sri Lanka.

Retrieved from https://www.newworldencyclopedia.org/p/index.php?title=Berlin_International_Film_Festival&oldid=1094942
Categories:
Hidden category:
This page was last edited on 11 January 2023, at 23:24.
Content is available under Creative Commons Attribution/Share-Alike License; additional terms may apply. See Terms of Use for details.