Although no dramatic change in the status of relations between the Japanese and Koreans occurred as a result of the battle, both sides claimed a measure of victory: the Japanese had made it clear they would not tolerate the Koreans assembling troops and the Koreans had shown that their troops could hold their own against the better equipped Japanese, giving them hope in their fight for independence. 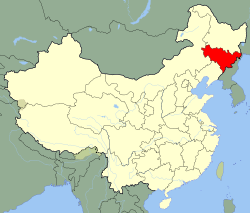 Map showing the province of Jilin, where the battle of Cheonsanri occurred (in red) in relationship to the rest of China (in white), and Korea (directly below Jilin, in grey)

Following Japan's occupation of Korea in 1905 under the Treaty of Eulsa, the Korean army was officially decommissioned in 1907. Groups of soldiers loyal to Korea resisted the Japanese occupation. Many were killed, and a portion of the surviving soldiers fled to neighboring China, and reorganized in Manchuria.[1]

These groups continued independently for more than a decade until January 1919, when the death of Emperor Gojong aroused suspicions and drew the Koreans together in a call for liberation from Japanese occupation, leading to the formation of the March 1st Movement and the establishment of a Korean provisional government in Shanghai, China later the same year. At the same time, many of the Korean soldiers who had earlier fled to Manchuria were organized by Jwajin Kim, under the auspices of the Northern military administration office army (북로군정서군, 北路軍政署軍).[1]

Failing to gain assistance from the Chinese government in containing the Korean troops in Manchuria, and angered by a raid on the Japanese delegation in the Chinese city of Hunchun on October 2, 1920 (where 13 Japanese were killed, reportedly by Korean independence fighters), Japan requested and received permission from China to take action against the Korean independence forces in Jilin province. 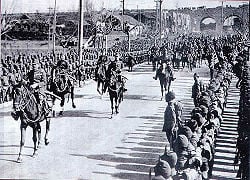 A division of the Japanese Imperial Army, from the early twentieth century, vastly better trained and equipped than the Korean forces.

The forces who joined the expedition for Japan were:

Among these, it was only the Azmuma detachment of the 19th Division who were directly involved in the military action, while the the Isobayashi detachment deployed in Hunchun and the Kimura detachment in Wangqing, as well as the other divisions, provided backup support.

Jwajin Kim, leader of the Korean forces from the Northern military administration office.

Jwajin Kim and the Northern military administration mobilized about 2,000 fighting forces and 1,300 supporting personnel to oppose the Japanese forces. Kim led a detachment of 600 men, while a second detachment of 1,400 was lead by Beomdo Hong. The Korean forces had been supplied with munitions by Czech soldiers, part of the Czech legion, who had met the Korean forces while returning home from Russia, where they had been posted at the end of World War I.[2]

During the first round of fighting Jwajin Kim, Beomsuk Lee, and 600 men took up positions in Baekunpyung (백운평, 白雲坪) gorge, hiding among rock formations in the heavily forested area, to ambush the Azuma detachment of Japanese troops. Fighting began early in the morning of October 21, and continued until early afternoon the following day, ending in a standoff. The same day Beomdo Hong and 1400 soldiers under his command fought the Japanese in Wonrugu (완루구, 完樓構). Fighting began in the afternoon of October 21, and ended early the following morning.

A larger battle took place on October 22, near the village of Arong, where Kim's soldiers and Hong's combined forces, again secreting themselves, this time in a ravine southwest of Arong village. Although tired from fighting the day before and hungry, as they had no provisions, the Korean soldiers again were able to hold off the Azuma detachment.

Fighting between The Azuma Detachment and the Korean independence fighters continued until October 26, with additional skirmishes in the Maeng valley, Mankagu, and Shigu on October 23; Cheonbusan mountain on October 24, and the final conflict at Godongha on October 26. Finally, on October 26, the Koreans retreated from the area of operation, moving toward the Ando province, north of Baekdusan mountain.

The 19th Division continued the sweeping operation until the end of 1920. Since the Korean troops did not reenter the area, most of the division withdrew from eastern Manchuria in early 1921 and the withdrawal was completed in May. Some of the Korean soldiers went to Siberia to join a pro-Soviet revolutionary army.

South Korea took the position that the killings in the Hunchun Incident were not committed by Korean independence fighters, but by a Chinese bandit leader named Ch'ang-chiang-hao, who had been bribed by the Japanese to attack the delegation and blame it on the Koreans. They claimed that the bandits brought to the raid by Ch'ang-chiang-hao went beyond the original plan of attack intended by the Japanese.

Casualties of the Japanese army

South Koreans refer to this battle as the "great victory at Cheongsanri" and consider it a victory of the Independence Army. Korean accounts of the Japanese casualties increased over time: Chosun Doknip Undongji Hyulsa by Bak Inseok (1920) describes the Japanese dead as "900-1,600 including Regimental Commander Kano." Later in 1964, Daehan Minguk jeongdangsa compiled by the National Election Commission reported the casualties as "over 1,000." Hanguk jeonjaengsa by the Military History Compilation Committee of the Ministry of National Defense (1967) claimed "3,300 dead and wounded," and Hanguk Minjok Undongsa by Jo Jihun (1975) reported "3,300 including Regimental Commander Kano."

Japanese sources claimed 11 dead and 24 wounded, and no casualty from officers. These numbers are supported by the official list of casualties registered on the list of the dead of the Yasukuni Shrine. Japanese investigation of weapons of the 19th Division after the expedition claims that the Japanese army consumed little.

The only Japanese soldier Korean sources name was "Regimental Commander Kano." Chosun Doknip Undongji Hyulsa states that a secret paper issued by a Japanese consul reported Regimental Commander Kano's death, although Japan denies the existence of such a report. Japan claims the only man corresponding to "Regimental Commander Kano" was Colonel Kano Nobuteru, who served as commander of the 27th regiment, whose name cannot be found on the casualty list, and, indeed is recorded as having led the regiment until 1922, two years after the battle. Moreover, two months after the Battle of Chingshanli, the regiment commanded by Colonel Kano captured a Korean and this event is recorded in a secret telegraph from the Japanese consulate in Chingshanli on November 31, 1920.[3]

Results of the conflict

The Japanese goal in engaging the Korean independence forces was to eliminate them or at least prevent them from perpetrating any attacks on Japanese citizens or officials. After the six days of fighting at Cheongsanri, the Korean independence forces retreated from the area. After a number of months of policing the area to ascertain the troops had not returned, Japan considered their objective achieved, and withdrew their troops.

The Korean forces assembled at Cheongsanri was one of the largest armies of Korean independence fighters that had been collected up until that time. Since the Korean troops were able to hold off the Japanese forces, far superior in number, successfully for six days, the Koreans were strongly encouraged by the outcome of the battle, and claimed a sweeping victory in the Battle of Cheongsanri.

History shows that the strength of the Korean independence army did not continue to grow over the ensuing years. The troops that were amassed for Cheonsanri retreated to the north. The following year, they were disarmed by the Soviet Red Army, some of them becoming prisoners in Kazakstan, and some joining the Red Army. Twenty years later, in 1941, another Korean army, the Korean Liberation Army was formed, under the Korean Provisional Government, with General Beomsuk Lee, one of the leaders of Korean troops at Cheonsanri, as Chief of Staff.

Retrieved from https://www.newworldencyclopedia.org/p/index.php?title=Battle_of_Chingshanli&oldid=1062483
Categories:
This page was last edited on 2 January 2022, at 03:54.
Content is available under Creative Commons Attribution/Share-Alike License; additional terms may apply. See Terms of Use for details.