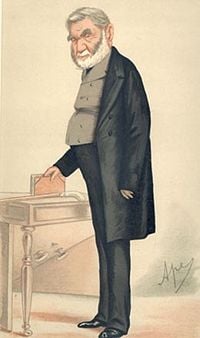 Sir Antonio Genesio Maria Panizzi (September 17, 1797 – April 8, 1879), was an Italian-born British librarian and a man of letters. He was exiled from Italy for his involvement in a patriotic group aiming to unite Italy through revolution, and took up residence in London. Although he remained in London until his death, Panizzi also played a significant role in the unification of Italy, providing support to those imprisoned and to Giuseppe Garibaldi.

In London, Panizzi came to work at the British Museum Library, later the British Library. Under his leadership, the library became the largest library in the world, containing more than 540,000 volumes. He is best remembered for his role in the design of the Circular Reading Room within the British Museum, which became one of the most famous rooms in the world, used by many great writers. It stands as a great legacy to this hard working, and creative man.

Antonio Panizzi was born on September 17, 1797, in Brescello in the Duchy of Modena, (today’s Italy). He obtained a degree in law from the University of Parma in 1818. While in Parma, which was then ruled by Francesco IV, the Duke of Modena, Panizzi joined one of the secret patriotic societies which aimed to unite Italy as an independent country. After obtaining his degree, Panizzi returned to Brescello where he practiced law and in 1821 became inspector of the town's schools.

In 1820, following a short lived revolution in the Kingdom of the Two Sicilies, Francesco IV started to arrest and imprison suspected patriots on trumped-up charges. When in May of 1822, the Duchy's Chief of Police, Giulio Besini, was assassinated, the tempo of arrests picked up, many were convicted, and a priest executed. Panizzi, tipped off that he also faced arrest and trial as a subversive, fled to Switzerland, where in 1823 he wrote and published a book decrying the repressive regime and trials against citizens of the Duchy of Modena. Following the book's publication, he was indicted, tried, and condemned to death in absentia in Modena, and pressure was brought to have him expelled from Switzerland.

In May of 1823, Panizzi moved to England, becoming a British citizen in 1832. Upon arrival in London, Italian poet in exile Ugo Foscolo gave him a letter of introduction to Liverpool banker William Roscoe and Panizzi moved to that city, where he made a meager living teaching Italian. In 1826 Panizzi met lawyer and political figure Henry Brougham and helped him in a difficult abduction case; when Brougham became Lord Chancellor of England, he obtained for Panizzi the professorship of Italian at the newly-founded University of London and later a post at the British Museum Library.

In addition to his work in London, Panizzi was in constant contact with his homeland. He used his personal influence with English Liberal statesmen such as Lord John Russell, Henry John Temple, and George William Frederick Villiers, to help his countrymen fight for the unification of Italy. During the revolution of 1848-1849 and again in 1859 he was in touch with Giuseppe Garibaldi and other Italian patriots. In 1868, he was appointed as a senator in the Italian Parliament and asked to return to Italy, but he thought he could do more for the Italian cause if he remained in London.

Panizzi was given an honorary degree by Oxford University, the Legion d'Honneur from France, and various chivalric honors from the Italian Government and Crown.

Panizzi died in London on April 8, 1879, and was buried in the Kensal Green Catholic Cemetery.

Before Panizzi’s tenure, the British Museum Library was in dire need of re-organization. A parliamentary committee was appointed in 1835 to probe the conditions of the institution and devise needed measures for its re-organization. Panizzi was appointed the Keeper of Printed Books in 1837, and one of the first things he had to do was to organize the move of almost the entire collection from Montagu House to its new building.

In 1845, Panizzi published a report on the state of the library, revealing the library’s deficiency in general literature. Based on the report, the library increased the annual grant for the purchase of books to £10,000. He also added to the general collection the unique Grenvilie library, worth some £50,000, which was obtained thanks to his friend Thomas Grenville (1755-1846).

While at the library, Panizzi undertook the creation of a new catalog, based on the 73 rules which he devised with his assistants in 1839. These rules served as the basis for the 91 rules adopted by the British Museum in 1841, which became the foundation for all subsequent library catalog rules of the nineteenth and twentieth centuries, and are at the origins of the ISBD of the twenty-first century and of digital cataloging elements such as Dublin Core. Panizzi also instituted the copyright system which, by law, made British publishers give the library a copy of every book printed in England.

The circular reading room at the British Museum

In the early years of his tenure, Panizzi became aware that library needed a new reading room. Due to lack of space to store books, purchases of new books were discouraged. Panizzi himself made a design for a new building—inside the Great Court, enclosed by existing museum buildings. The design was eventually perfected by architect Sydney Smirke and accepted by the museum trustees in 1854. The Reading Room was opened in 1857. Many great writers including Charles Dickens, Karl Marx, and Virginia Woolf are known to have used it.[1]

Panizzi was a personal friend of British Prime minister Lord Palmerston and William Gladstone, conducted an active correspondence with Sardinian Prime Minister Count Camillo Benso di Cavour, and through French archaeologist and writer Prosper Merimee, was well acquainted with French Emperor Napoleon III and Empress Eugenie. In 1844, Panizzi also assisted Giuseppe Mazzini, then in exile in London, by publishing an influential article denouncing the practice ordered by the Home Secretary of ordering Mazzini's private letters opened by the Post Office and giving copies of their contents to the Austrian Embassy. He also orchestrated a visit of Giuseppe Garibaldi to England, and convinced Gladstone to travel to Naples to view personally the inhumane conditions in which political prisoners were kept.

When his efforts to have these prisoners released failed, he raised money to buy a ship and mounted an expedition to rescue the prisoners from the island fortress of Santo Stefano in the Gulf of Gaeta. Unfortunately, the ship sank in a storm shortly after leaving England. In 1859, the prisoners were released by Neapolitan King Ferdinand II of the Two Sicilies and put on a ship bound for New York. Panizzi then mounted a new expedition led by his son, who commandeered the ship and made port in England, where the former prisoners received asylum and were assured support.

The British Museum library, which was, in fact, the national library of the United Kingdom in all but name, during Panizzi's tenure as Keeper of Printed Books, increased its holdings from 235,000 to 540,000 volumes, making it at the time the largest library in the world. Its famous circular Reading Room was designed and built by architect Sydney Smirke from a sketch drawn by Panizzi. The British Museum library formed the bulk of what became the British Library in 1973 and the Circular Reading Room became one of the most famous rooms in the world, despite being accessible only to those with a Reader's ticket. In 1997 the Library moved to its current site at St. Pancras; the Reading Room is now open to any member of the public who wishes to read there.

Since 1985, British Library hosts an annual series of bibliography lectures, called the Panizzi lectures, established in his honor.