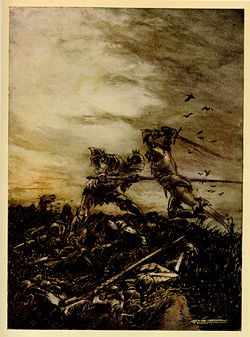 Arthur and Mordred in battle.

Ambrosius Aurelianus, was a fifth century Roman leader in Britain who figures prominently in the early Arthurian legends.

According to the Celtic Christian writer Gildas, Ambrosius was a war leader of the Romano-British, possibly descended from Roman royalty, who won an important battle against the Saxons.

Accounts of the ninth century cast him as the antagonist of Vortigern, and the Historia Regum Britanniae, written around 1136 by Geoffrey of Monmouth, makes him a son of Constantine I, the brother of Uther Pendragon, and the person who ordered the building of Stonehenge.

Some scholars believe Ambrosius was the leader of the Romano-British at the Battle of Mons Badonicus and as such may have provided one of the historical bases for the legends of King Arthur.

Aurelianus according to Gildas

Ambrosius Aurelianus is one of the few people the Christian scholar Gildas (c. 494 or 516 – c. 570) identifies by name in his sermon De Excidio Britanniae.[1] In this version of events, following a destructive assault by the Saxons, the survivors gather together under the leadership of Ambrosius, who is described as "a gentleman who, perhaps alone of the Romans, had survived the shock of this notable storm. Certainly his parents, who had worn the purple, were slain in it. His descendants in our day have become greatly inferior to their grandfather's [avita] excellence."

We know from Gildas that he was of high birth, and had Roman ancestry; he was presumably a Romano-Briton, rather than a Roman from elsewhere in the empire, though it is impossible to be sure. It also appears that Ambrosius was a Christian—Gildas says that he won his battles "with God's help."[2] Ambrosius reportedly organized the survivors into an armed force and achieved the first military victory over the Saxon invaders. However, this victory was not decisive: "Sometimes the Saxons and sometimes the citizens (meaning the Romano-British inhabitants) were victorious."

Two points in this brief description have attracted much scholarly commentary. The first is what Gildas meant by saying Ambrosius' family "had worn the purple." Does this mean that Ambrosius was related to one of the Roman Emperors, perhaps the House of Theodosius or a usurper like Constantine III? This is not necessarily the case, for Roman males of the senatorial class wore clothes with a purple band to denote their class, and the reference to purple may be to his aristocratic heritage. In addition, Roman military tribunes, senior officers in Roman legions, wore a similar purple band, so the purple may refer to military leadership background in his family.

The second question is the meaning of the word avita, translated above as "grandfather." Does it mean "ancestors," or did Gildas intend it to mean more specifically "grandfather"—which could indicate that Ambrosius lived about a generation before the Battle of Mons Badonicus? The lack of information for this period inhibits accurate answers to these questions.

Other accounts of Aurelianus 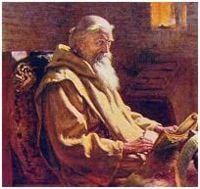 The Benedictine monk, author, and scholar Bede, follows Gildas' account of Ambrosius in his Ecclesiastical History of the English People, but in his Chronica Majora he dates Ambrosius' victory to the reign of the Emperor Zeno (474-91).

The Historia Britonum, written sometime shortly after 833 C.E. and ascribed to Nennius, preserves several further snippets of lore about Ambrosius. The most significant of these is the story about Ambrosius, Vortigern, and the two dragons beneath Dinas Emrys in Chapters 40–42. This story was later retold with more detail by Geoffrey of Monmouth in his fictionalized Historia Regum Britanniae, conflating the personage of Ambrosius with the Welsh tradition of Merlin the visionary, known for oracular utterances that foretold the coming victories of the native Celtic inhabitants of Britain over the Saxons and the Normans.

Other traditions preserved in Historia Brittonum include; in Chapter 31, we are told that Vortigern ruled in fear of Ambrosius. Later, in Chapter 66, various events are dated from a battle of Guoloph (often identified with Wallop, 9.3 miles east-southeast of Amesbury near Salisbury), which is said to have been between Ambrosius and Vitolinus. Lastly, in Chapter 48, it is said that Pascent, the son of Vortigern, was granted rule over the kingdoms of Buellt and Gwrtheyrion by Ambrosius. It is not clear how these various traditions relate to each other or that they come from the same tradition, and it is possible that these references are to a different Ambrosius. The Historia Brittonum dates the battle of Guoloph to "the twelfth year of Vortigern," by which 437 seems to be meant. This is perhaps a generation before the battle that Gildas says were commanded by Ambrosius Aurelianus.

At the end of the story in Chapters 40-42, Vortigern hands over to Ambrosius "the fortress, with all of the kingdoms of the western part of Britain." In Chapter 48, Ambrosius is described as "king among all the kings of the British nation." It is impossible to know to what degree he actually wielded political power, and over what area, but it is certainly possible that he ruled some part of England.

Because Ambrosius and Vortigern are shown in the Historia Brittonum as being in conflict, some historians have suspected that this preserves a historical core of the existence of two parties in opposition to one another, one headed by Ambrosius and the other by Vortigern. J. N. L. Myres built upon this suspicion and put forth the hypothesis that belief in Pelagianism reflected an actively provincial outlook in Britain and that Vortigern represented the Pelagian party, while Ambrosius led the Catholic one. Some later historians accepted this hypothesis as fact and have created a narrative of events in fifth century Britain with various degrees of elaborate detail. Yet a simpler alternative interpretation of the conflict between these two figures is that the Historia Brittonum is preserving traditions hostile to the purported descendants of Vortigern, who at this time were a ruling house in Powys. This interpretation is supported by the negative character of all of the stories retold about Vortigern in the Historia Brittonum, which include his alleged practice of incest. 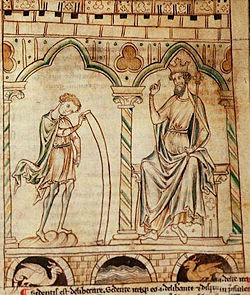 Merlin reads his prophecies to Vortigern, in a manuscript of Geoffrey of Monmouth's Prophetiae Merlini, c.1250-70.

Ambrosius Aurelianus appears in later pseudo-chronicle tradition beginning with Geoffrey of Monmouth's Historiae Regum Britanniae with the slightly garbled name Aurelius Ambrosius, now presented as son of a King Constantine. When King Constantine's eldest son Constans is murdered at Vortigern's instigation, the two remaining sons, Ambrosius and Uther, still very young, are quickly hustled into exile in Brittany. (This, however, does not fit with Gildas' account in which Ambrosius' family perished in the turmoil of the Saxon uprisings.) Later, when Vortigern's power has faded, the two brothers return from exile with a large army, destroy Vortigern and become friends with Merlin.

In Welsh, Ambrosius appears as Emrys Wledig. In Robert de Boron's Merlin he is called simply Pendragon and his younger brother is named Uter, which he changes to Uterpendragon after the death of the elder sibling. This is probably a confusion that entered oral tradition from Wace's Roman de Brut. Wace usually only refers to li roi 'the king' without naming him, and someone has taken an early mention of Uther's epithet Pendragon as the name of his brother.

S. Appelbaum has suggested that Amesbury in Wiltshire might preserve in it the name of Ambrosius, and perhaps Amesbury was the seat of his power base in the later fifth century. Place name scholars have found a number of place names through the Midland dialect regions of Britain that incorporate the ambre- element: Ombersley in Worcestershire, Ambrosden in Oxfordshire, Amberley in Herefordshire, and Amberley in Gloucestershire. These scholars have claimed this element represents an Old English word amor, the name of a woodland bird. However, Amesbury in Wiltshire is in a different dialect region and does not easily fit into the pattern of the Midland dialect place names. If we combine this etymology with the tradition reported by Geoffrey of Monmouth stating Ambrosius Aurelianus ordered the building of Stonehenge—which is located within the parish of Amesbury (and where Ambrosius was supposedly buried)—and with the presence of an Iron age hill fort also in that parish, then it is extremely tempting to connect this shadowy figure with Amesbury.

The fact that Ambrosius Aurelianus resisted the Saxons and may have evolved through legend to become King Arthur remains an important aspect of the British national identity. As a war leader, he was valiant in his efforts to withstand ancient enemies and inspired the British people to celebrate his legacy by naming their children after him.