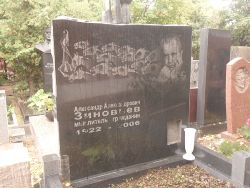 Alexander Aleksandrovich Zinovyev (Russian: Александр Александрович Зиновьев əlʲɪˈksandr əlʲɪˈksandrəvʲɪʨ zʲɪˈnovʲjɪf [1]) (September 29, 1922 – May 10, 2006) was a well-known Russian logician, sociologist, writer and satirist. Apart from professional work in the field of logic, Zinovyev was renowned for his long novel The Yawning Heights and his follow-up, The Radiant Future, both of which were satirical treatments of Soviet power. Zinoviev coined the term Homo Sovieticus, a satirical reference to the type of man created by Soviet efforts to "engineer human souls." Marxism had held that human nature was fungible, that it was wholly determined by the means of production, so that a new kind of person would emerge in the Soviet state that reflected the values of socialism based on the equality that was supposed to exist in a socialist state. Homo Sovieticus referred to the graft and corruption that the Soviet system had actually engendered.

Once a dissident and an extreme critic of Communism (and successive leaders of the Soviet Union), he later became an apologist for Communism after the fall of the Soviet Union. He also become moderately well-known as an author of various critical writings about both Western and Russian societies.

Alexander was the sixth child born to Alexander Yakovlevich Zinoviev and Appolinariya Vasilyevna Zinovieva. The family lived in the village of Pakhtino, Chukhloma region, Kostroma Oblast, but a few years after Alexander's birth they moved to Moscow, seeking a better quality of life.

Zinoviev began studying philosophy at the Institute of Philosophy, Literature and History in 1939 but was soon expelled for his critical attitude to Stalin's policy of forced collectivization. He was arrested but managed to escape. Later, he recalled, he was involved in an anti-Stalinist group which plotted to assassinate Stalin. He hid himself in Siberia until 1940, when he joined the Red army. He took part in World War II as a tank driver and a pilot. After the war he began writing fiction that he did not publish, graduating from Moscow State University in 1951 summa cum laude. His thesis on the logical structure of Marx’ Das Kapital was only published in Russia in 2002. During the next decades he became one of the most important logicians of the USSR.

Alexander Zinovyev published several articles and books on logic (especially polyvalential logic) and methodology of science. He was often invited to international conferences but the authorities never let him attend. As the chairman of Moscow State University Logic Department, Zinovyev earned a reputation as a pro-dissident lecturer since he refused to expel dissident professors. As a protest against Brezhnev’s spreading cult of personality he resigned from editorial board of Voprossy Filosofii (Philosophical Questions), the leading philosophy journal of the time. By the year 1974 he was in almost complete isolation.

Various fictional, often satirical, stories written about Soviet society were agglomerated into his first major work of fiction, The Yawning Heights. After the release of the book in Switzerland in 1976, Zinoviev was dismissed from his lecturer's job, evicted from the Academy of Sciences, stripped of all awards, even his war-time medals, and finally expelled from Soviet Union after his next novel, The Radiant Future, which criticized Leonid Brezhnev, was published in the West in 1978. He settled in Munich where he lived with his wife Olga and their daughter, until 1999.

The success of The Yawning Heights led to its translation into most major European languages. It was read aloud in Russian via Western radio broadcasts. The Yawning Heights was the first in a series of Zinoviev’s fictional works that have been widely recognized as belonging to the original genre which he called the "sociological novel." The purpose of such novels is to create fictional situations to give reign to a discussion of their sociologically significant aspects. Characters, who vary in their personal qualities and social positions, discuss their life in the society, permitted by the author to voice different opinions on various issues. Zinoviev admits that much misunderstanding of his ideas arises from undue confusion of his point of view with those of his characters.

Among his non-fiction works from that time are Without Illusions (1979), We and the West (1981), Communism as a Reality (1981), and Gorbachevism (1987). The latter was first published in French, 1987 (Lausanne: L'Âge d'homme). Without Illusions is a collection of essays, lectures and broadcasts by Zinoviev in which he explained his way of interpreting Communist society using a scientific approach. Zinoviev believed that the Western democracies had actually underestimated the threat of Communism, especially the peaceful infiltration of Communist characteristics into the Western society. He argued that Communism had not been able to eradicate the social differences between people, but had only changed the forms of inequality. Contrary to some critics of the Soviet system, Zinoviev emphasized that communism was by no means an irrational system, but the byproduct of certain sociological principles, and as such, rational in nature. However, he also stressed that in no way did he support Communism.[2]

Until the era of Perestroika, he was one of the most outspoken critics of the Soviet regime. Unlike Alexander Solzhenitsyn, who sought a kind of revival of pre-1917 Russia, Zinoviev also denounced religion and Russian Nationalism.

Homo Sovieticus (from New Latin) is a sarcastic and critical reference to a category of people with a specific mindset that were allegedly created by the governments of the Soviet bloc. The term was coined by Zinoviev as the title of his book of the same name. [3]

Marxism had held that there was no essential human nature, but that all culture was a part of the superstructure that was based on the material base, or means of production. This became a kind of dogma in communist societies leading to the idea that the Soviet system would create a new, better kind of person — better because the socialist means of production were considered to be de facto non-exploitative. This would lead to the creation of a "New Soviet man." It was this belief that served as justification for the labor camps, which were designed for "re-education." However, as people realized the cynical nature of the exploitation that took place in the name of "re-engineering human souls," a new term,Homo Sovieticus, was coined. Homo Sovieticus was a term with negative connotations, invented by opponents to describe what they said was the real result of Soviet policies. Instead of the "New Soviet man," the regime created a dysfunctional individual, characterized by:

Following the collapse of the Soviet Union, many social and economic problems in Russia were blamed on Homo Sovieticus’ inability to adapt to a market-economy based capitalist society.

After the fall of the Soviet empire

Zinoviev changed his critical attitude to communism in light of the crime, corruption and economic problems that Russia faced after the collapse of the Soviet Union. In the 1990s many of his statements were apologetic of communism and he became one of the most radical critics of the reforms initiated by Boris Yeltsin.[2] He argued that the West was the key influence in the Union’s downfall, and even claimed that the West made use of Mikhail Gorbachev and Boris Yeltsin as its agents for crushing Russia. In 1996, he appealed to the public to support Gennady Zyuganov, a Communist candidate who eventually lost the race against Yeltsin. According to Solzhenitsyn, Zinoviev was one of those who later viewed forced collectivization as a long-awaited gift offered to the peasants. [4]

After 21 years of exile, Alexander Zinoviev returned to Russia in 1999. Having turned anti-West, he stated that "headed by the United States (a global super-society located in the USA), the West has deliberately put into practice a program for destroying Russia."[5] He used to be an ardent supporter of Yugoslavia's anti-Western leader, Slobodan Milošević, and visited him, praising him as a true fighter against the 'Westernizers'. Regarding Josef Stalin, whom Zinovyev and his comrades had once planned to assassinate, Zinovyev declared: “I consider him one of the greatest persons in the history of mankind. In the history of Russia he was, in my opinion, even greater than Lenin. Until Stalin's death I was anti-Stalinist, but I always regarded him as a brilliant personality.”[6]

In his online interview, Zinovyev maintained that all the accusations brought against Milošević were mere slander; he also declared that he admired Radovan Karadzic and Ratko Mladić, whom he regarded as significant and brave persons of the twentieth century.[7] Zinoviev was a co-chairman of the International Committee to Defend Slobodan Milosevic [3]. After the death of Milošević in March 2006, the future of this association remains unclear.

Zinoviev was opposed to globalization, which he compared to World War III. He was also fervently critical of the US role in the world; he regarded the US as ten times more dangerous to Russia than Nazi Germany. [4]