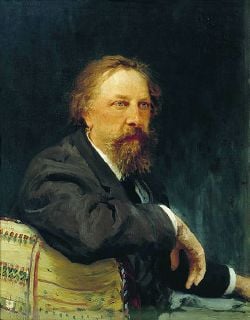 Aleksey Konstantinovich Tolstoy (Russian: Алексей Константинович Толстой; September 5 [O.S. August 24] 1817 – October 10] [O.S. September 28] 1875) was a Russian poet, novelist and dramatist. Not as famous internationally as his distant relative, Leo Tolstoy he was nevertheless a writer of considerable accomplishment, avoiding the overly pro-Slavic style of many contemporaries. Through his satire, rather like an early day George Orwell, he ridiculed the political classes. He was also critical of the embryonic materialism that was creeping into fashion as Russia became more industrialized.

Tolstoy was born in Saint Petersburg to the famous family of Count Tolstoy, and inherited the title "Count." His mother, A. A. Perovskaya, married Count K. P. Tolstoy, then an elderly widower, in 1816. The marriage was not a success and the couple soon broke up. When Tolstoy was six weeks old, he was taken by his mother and his maternal uncle, A. A. Perovskiy, to the uncle's estate, were he was raised until he was eight years old. Then, he was taken back to Saint Petersburg. Soon, with the help of his uncle's connections, he was introduced to future emperor Alexander II, who was the same age. Tolstoy became the young prince's weekend playmate among other children of noble background. This relationship would last throughout Tolstoy's entire life. In the future, the empress Mariya Alexandrovna, wife of Alexander II, would pay high tribute to the Tolstoy's talent.

In 1826 Tolstoy, with his mother and uncle, traveled in Europe—the "grand tour" was a tradition for wealthy Russian noble families. In Germany he visited the elderly Johann Wolfgang von Goethe, and sat on his lap. Italy produced a great impression on the boy with its art, architecture and beautiful cities. With every town they visited, Tolstoy became more and more interested in art.

After receiving schooling at home, in the mid 1830s Tolstoy became one of the "archive boys" at the Moscow Archive of Foreign Affairs Department. As an "archive student," he graduated from the University of Moscow in 1836, and was assigned to the Russian diplomatic mission in Germany. That year his uncle died, leaving him heir of a considerably fortune.

During the winter of 1850-1851, he met Sophia Miller, wife of a cavalry colonel, during a palace ball. After a stormy romance, Sophia left her husband. They could not marry officially for some time because Sophia was not divorced. Tolstoy's entire lyric poetry is addressed to her. 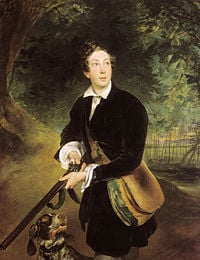 Tolstoy spent almost all of his life at court, serving first as the master of ceremonies, later as grand master of Royal Hunting, visiting Europe on many occasions. In 1855, during the Crimean War he tried to organize his own militia but was unsuccessful. Instead, he joined Royal Rifle Regiment. However, he did not see active service due to a severe case of typhus, which he barely survived and cut down a large portion of his regiment. In 1861 he retired from service to dedicate more time to writing poetry.

His literary reputation increased as his writing continued. He often wrote under the name of Kozma Prutkov, and much of his writing was satire directed against the Russian bureaucracy. Unlike many of his contemporaries, he can neither be classed as a Slavophile or as a Westernizer. His historical novel, A Prince of Outlaws was set during the reign of Ivan the Terrible. He returned to this period in a trilogy of blank verse The Death of Ivan the Terrible (1865), Tsar Fyodor Ivanovitch (1868), and Tsar Boris (1870). For these novels, he was influenced primarily by Alexander Pushkin.

Tolstoy could have become a significant figure politically due to his popularity at court had he wanted to pursue a more public career. However, he was dedicated to his writing, and wanted to concentrate on his "art." For this reason, one of his first longer poems, "Ioann Damaskin," about the life of a court poet, was partially autobiographical. Yet, in spite of his close friendship with the emperor, nor was he content to just be one of the courtiers, living a life of ease with no real purpose. Tolstoy chose to write.

In 1841 he published his first book, Vampire, which he totally neglected later. During this period he become well acquainted with some of Russia's most eminent writers, such as Nikolai Gogol, Sergei Aksakov, Pavel Vasilyevich Annenkov, who edited Pushkin's work, Nikolay Alexeyevich Nekrasov, Ivan Panayev, and particularly with Ivan Sergeyevich Turgenev who writing addressed social and political issues and who opposed serfdom. After a gap in literary production, he published a few of his poems in the journal Sovremennik" ("Contemporary"), which immediately attracted public attention.

During 1854-1855 he collaborated with two of his cousins with to write a number of satires published under the collective pen name of Kozma Prutkov. It is very hard to distinguish which parts were contributed by Tolstoy, but he was well known for his fine sense of humor. Some of the most famous poems are full of openly expressed irony against trends of the 1860s, which inevitably resulted in a good deal of criticism. He was especially critical of the new materialism that the beginning of industrialization in Russia had stimulated.

Beside satires, he wrote ballads, an historical novel and some licentious verse. Many of his works are full of Slavic themes. However, his lasting contribution to Russian literature was the trilogy of historical dramas, modeled after Pushkin's Boris Godunov. His best achievement in prose is his historic novel from the age of Ivan the Terrible (Duke Silver). This novel is written in traditional oral style, which contributed to its success among all levels of society.

He died September 28 (October 10), 1875, from a morphine overdose, which was prescribed for him as pain relieve from asthma, angina pectoris and neuralgia.

Retrieved from https://www.newworldencyclopedia.org/p/index.php?title=Aleksey_Konstantinovich_Tolstoy&oldid=1052638
Categories:
This page was last edited on 15 May 2021, at 09:33.
Content is available under Creative Commons Attribution/Share-Alike License; additional terms may apply. See Terms of Use for details.