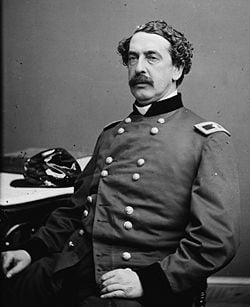 Abner Doubleday (June 26, 1819 – January 26, 1893), was a career U.S. Army officer and Union general in the American Civil War. He fired the first shot in the defense of Fort Sumter, the opening battle of the war, and played a pivotal role in the early fighting at the Battle of Gettysburg. Gettysburg was his finest hour, but his relief by Major General George G. Meade caused lasting enmity between the two men.

In San Francisco, California, following the civil war, he obtained a patent on the cable car railway that still runs there. His final years were spent in New Jersey. There Doubleday was a prominent member, and later president of, the Theosophical Society. However, his most enduring claim to fame is the belief of many that he was credited with the invention of baseball, although Doubleday made no such claim. Sports historians and similar authorities point out Alexander Cartwright as the game's inventor.

Abner Doubleday, born one of three sons to Ulysses and Hester Doubleday on June 26, 1819, in Ballston Spa, New York, was schooled at Auburn and Cooperstown, New York.[1] Abner clearly inherited his family's traits: Deeply tied roots to United States politics and the military. His grandfather had fought in the American Revolutionary War and his father represented Connecticut[2] for four years in the United States Congress.[3] Abner practiced as a surveyor and civil engineer for two years before entering the United States Military Academy at West Point in 1838, from which he graduated in 1842, 24th in a class of 56 cadets. He was later commissioned a brevet second lieutenant in the 3rd U.S. Artillery.[4] 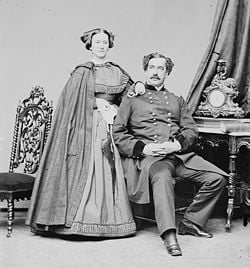 Doubleday and his wife, Mary.

Doubleday initially served in coastal garrisons and then in the Mexican-American War from 1846 to 1848, and the Seminole Wars from 1856 to 1858. In 1852, he married Mary Hewitt of Baltimore. In 1858, he was transferred to Fort Moultrie in Charleston harbor, but by the start of the Civil War, he was a captain and second in command in the garrison at Fort Sumter, under Major Robert Anderson. He aimed the cannon that fired the first return shot in answer to the Confederate bombardment, on April 12, 1861, which initiated the War between the States. He subsequently referred to himself as the "hero of Sumter" for his role there.

Brigade and division command in Virginia

Doubleday was promoted to major on May 14, 1861, and commanded the Artillery Department in the Shenandoah Valley from June to August, and then the artillery for Major General Nathaniel Banks' division of the Army of the Potomac. He was appointed brigadier general of volunteers on February 3, 1862, and was assigned to duty in northern Virginia while the Army of the Potomac conducted the Peninsula Campaign. His first combat assignment was to lead the 2nd Brigade, 1st Division, III Corps of the Army of Virginia during the Northern Virginia Campaign. In the actions at Brawner's farm, just before the Second Battle of Bull Run, he took the initiative to send two of his regiments to reinforce Brig. Gen. John Gibbon's brigade against a larger Confederate force, fighting it to a standstill. (Personal initiative was required since his division commander, Brig. Gen. Rufus King, was incapacitated by an epileptic seizure at the time. He was replaced by Brig. Gen. John P. Hatch.)[5] His men were routed when they encountered Maj. Gen. James Longstreet's corps, but by the following day, August 30, he took command of the division when Hatch was wounded, and he led his men to cover the retreat of the Union Army.

Doubleday again led the division, now assigned to the I Corps of the Army of the Potomac, after South Mountain, where Hatch was wounded again. At Antietam, he led his men into the deadly fighting in the Cornfield and the West Woods, and one colonel described him as a "gallant officer … remarkably cool and at the very front of battle." He was wounded when an artillery shell exploded near his horse, throwing him to the ground in a violent fall. He received a brevet promotion to lieutenant colonel in the Regular Army for his actions at Antietam and was promoted in March 1863, to Major General of volunteers, to rank from November 29, 1862.[6] At Fredericksburg in December 1862, his division mostly sat idle. During the winter, the I Corps was reorganized and Doubleday assumed command of the 3rd Division. At Chancellorsville in May 1863, the division was kept in reserve.

At the start of the Battle of Gettysburg, July 1, 1863, Doubleday's division was first infantry on the field to reinforce the cavalry division of Brig. Gen. John Buford. When his corps commander, Maj. Gen. John F. Reynolds, was killed very early in the fighting, Doubleday found himself in command of the corps. His men fought well in the morning, putting up a stout resistance, but as overwhelming Confederate force massed against them, their line eventually broke, and they retreated back through the town of Gettysburg to the relative safety of Cemetery Hill, south of town. It was Doubleday's finest performance during the war, five hours leading 9,500 men against ten Confederate brigades that numbered more than 16,000. Seven of those brigades incurred casualties that ranged from 35 to 50 percent, indicating the ferocity of the Union defense. But on Cemetery Hill, the I Corps could muster only a third of its men as effective for duty and the corps was essentially destroyed as a combat force for the rest of the battle; it would be decommissioned in March 1864, its surviving units combined into other corps.

On July 2, Army of the Potomac commander Maj. Gen. George G. Meade replaced Doubleday with Maj. Gen. John Newton, a more junior officer from another corps. The ostensible reason was a report by XI Corps commander Maj. Gen. Oliver O. Howard that Doubleday's corps broke first, causing the entire Union line to collapse, but Meade also had a long history of disdain for Doubleday's combat effectiveness, dating back to South Mountain. Doubleday was humiliated by this snub and held a lasting grudge against Meade, but he returned to division command and fought well for the remainder of the battle. He was wounded in the neck on the second day of Gettysburg and received a brevet promotion to colonel in the Regular Army for his service. He formally requested reinstatement as I Corps commander, but Meade refused, and Doubleday left Gettysburg on July 7, for Washington.[7]

Doubleday assumed mostly administrative duties in the defenses of Washington, D.C., where his only return to combat was directing a portion of the defenses against the attack by Confederate Lt. Gen. Jubal A. Early in the Valley Campaigns of 1864. Also while in Washington, Doubleday testified against George Meade at the United States Congress Joint Committee on the Conduct of the War, criticizing him harshly over his conduct of the Battle of Gettysburg.

After the Civil War, Doubleday mustered out of the volunteer service on August 24, 1865, reverted to the rank of lieutenant colonel, and became the colonel of the 35th U.S. Infantry in September 1867. He was stationed in San Francisco from 1869 through 1871, and he took out a patent for the cable car railway that still runs there, receiving a charter for its operation; however, Doubleday signed away his rights when he was reassigned. In 1871, he commanded the 24th U.S. Infantry, an all African-American regiment, in Texas. He retired in 1873 and, by 1878, he was living in Mendham, New Jersey, from where, that year, he became a prominent member of the Theosophical Society. When two of the founders of that society, Madame Blavatsky and Henry Steel Olcott, moved to India at the end of that year, he was constituted as the President of the American body.[8]

Doubleday died of heart disease in Mendham, and is buried in Arlington National Cemetery in Arlington, Virginia.

Although Doubleday was a competent, if colorless, combat general with experience in many important Civil War battles, the lore of baseball credits Doubleday with inventing the game, supposedly in Elihu Phinney's cow pasture in Cooperstown, New York, in 1839.

The Mills Commission, chaired by Abraham G. Mills, the fourth president of the National League, was appointed in 1905, to determine the origin of baseball. The committee's final report, on December 30, 1907, stated, in part, that "the first scheme for playing baseball, according to the best evidence obtainable to date, was devised by Abner Doubleday at Cooperstown, New York, in 1839." It concluded by saying, "in the years to come, in the view of the hundreds of thousands of people who are devoted to baseball, and the millions who will be, Abner Doubleday's fame will rest evenly, if not quite as much, upon the fact that he was its inventor … as upon his brilliant and distinguished career as an officer in the Federal Army."[9]

However, there is considerable evidence to dispute this claim. Baseball historian George B. Kirsch has described the results of the Mills commission as a "myth." He wrote, "Robert Henderson, Harold Seymour, and other scholars have since debunked the Doubleday-Cooperstown myth, which nonetheless remains powerful in the American imagination because of the efforts of Major League Baseball and the Hall of Fame in Cooperstown." At his death, Doubleday left many letters and papers, none of which describe baseball, or give any suggestion that he considered himself a prominent person in the evolution of the game. Chairman Mills himself, who had been a Civil War colleague of Doubleday and a member of the honor guard for Doubleday's body as it lay in state in New York City, never recalled hearing Doubleday describe his role as the inventor. Doubleday was a cadet at West Point in the year of the alleged invention and his family had moved away from Cooperstown the prior year. Furthermore, the primary testimony to the commission that connected baseball to Doubleday was that of Abner Graves, whose credibility is questionable; a few years later, he shot his wife to death, apparently because of mental illness, and he was committed to an institution for the criminally insane for the rest of his life.[10]

Doubleday Field is a minor league baseball stadium named in the memory of Abner Doubleday, located in Cooperstown near the Baseball Hall of Fame. It hosts the annual Hall of Fame Game, originally between "old-timers" teams, but currently an exhibition game between two major league teams.

Doubleday published two important works on the American Civil War: Reminiscences of Forts Sumter and Moultrie (1876), and Chancellorsville and Gettysburg (1882), the latter being a volume of the series Campaigns of the Civil War.

Doubleday's indecision as a commander earned him the uncomplimentary nickname "Forty-Eight Hours."

Retrieved from https://www.newworldencyclopedia.org/p/index.php?title=Abner_Doubleday&oldid=1051494
Categories:
Hidden category:
This page was last edited on 8 April 2021, at 17:08.
Content is available under Creative Commons Attribution/Share-Alike License; additional terms may apply. See Terms of Use for details.