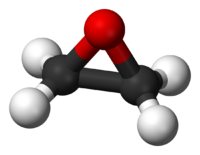 A ball-and-stick model of ethylene oxide, the simplest epoxide.

An epoxide is a cyclic ether with only three ring atoms. The simplest epoxide is ethylene oxide, also known as oxirane, which is regarded as the "parent" compound. Thus, members of the class of epoxides are also called oxiranes. Epoxides are more reactive than ordinary ethers.

Simple epoxides are named from the parent compound oxirane (ethylene oxide), such as in chloromethyloxirane. When epoxide is considered a functional group in a larger compound, it is referred to with the epoxy prefix. An example is the compound 1,2-epoxycycloheptane, which can also be called cycloheptene epoxide.

A polymer containing unreacted epoxide units is called a polyepoxide or an epoxy.

Epoxides are usually produced by one of the reactions given below.

Olefin peroxidation, also known as the Prilezhaev reaction,[1] involves oxidation of an alkene with a peroxide, usually a peroxyacid like meta-chloroperoxybenzoic acid (m-CPBA) or with a dioxirane such as dimethyldioxirane (DMDO). An example is the epoxidation of styrene with perbenzoic acid to styrene oxide:[2]

The reaction proceeds via what is commonly known as the Butterfly Mechanism.[3] It is easiest to consider the oxygen as an electrophile and the alkene as a nucleophile, although they both operate in that capacity, and the reaction is thought to be concerted. (The numbers in the mechanism below are for simplification.) 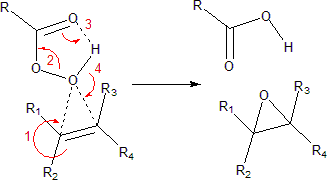 Related processes include some catalytic enantioselective reactions, such as the:

This method is a variant of the Williamson ether synthesis. In this case, the alkoxide ion and the halide are right next to each other in the same molecule (such compounds are generically called halohydrins), which makes this a simple ring closure reaction. For example, with 2-chloropropanol:[4]

In the Johnson-Corey-Chaykovsky reaction, epoxides are generated from carbonyl groups and sulfonium ylides.

The three-membered ring of epoxide is approximately an equilateral triangle, that is, its bond angles are about 60°, which makes it highly strained. The strained ring makes epoxides more reactive than other ethers, especially towards nucleophiles. Typical epoxide reactions are noted below.

Retrieved from https://www.newworldencyclopedia.org/p/index.php?title=Epoxide&oldid=1064806
Categories:
Hidden category:
This page was last edited on 11 February 2022, at 22:29.
Content is available under Creative Commons Attribution/Share-Alike License; additional terms may apply. See Terms of Use for details.