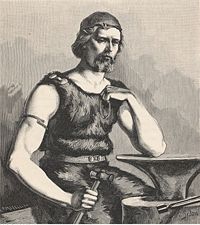 Völund is a mythical smith-god of the Nordic and Germanic peoples, whose shocking and brutal tale of revenge is relayed in the Völundarkviða, a poem in the Poetic Edda. He is intimately related to Weyland (also spelled Wayland, Weland and Watlende), the smithing god of the Anglo-Saxon religion that was brought with the Saxon settlers from Britain, though the exact connection to the Nordic version (whether it be direct extrapolation or syncretism) is unclear.[1]

Norse Mythology is renowned for its rich tapestry of colorful stories, memorable characters, heroic sacrifice, and epic battles. In the history of northern Europe, this collection of tales brought meaning and purpose to both the Scandinavian peoples and the northern Germanic tribes for many centuries. Although the spiritual lore of Norse mythology, like virtually all human history itself, is violent, glorifying war and human sacrifice, this region has now become a leader of peace and disarmament on the international stage.

Völund in a Norse Context

As a figure in the Norse mythic corpus, Völund belonged to a complex religious, mythological and cosmological belief system shared by the Scandinavian and Germanic peoples. This mythological tradition, of which the Scandinavian (and particularly Icelandic) sub-groups are best preserved, developed in the period from the first manifestations of religious and material culture in approximately 1000 B.C.E. until the Christianization of the area, a process that occurred primarily from 900-1200 C.E..[2] The tales recorded within this mythological corpus tend to exemplify a unified cultural focus on physical prowess and military might.

Within this framework, Norse cosmology postulates three separate "clans" of deities: the Aesir, the Vanir, and the Jotun. The distinction between Aesir and Vanir is relative, for the two are said to have made peace, exchanged hostages, intermarried and reigned together after a prolonged war. In fact, the most major divergence between the two groups is in their respective areas of influence, with the Aesir representing war and conquest, and the Vanir representing exploration, fertility and wealth.[3] The Jotun, on the other hand, are seen as a generally malefic (though wise) race of giants who represented the primary adversaries of the Aesir and Vanir.

Völund, in the semi-eponymous tale from the Poetic Edda, is an intriguing character. On one hand, he seems to be a (fairly immoral) human who exacts bloody revenge upon a tormentor. On the other, the mythical and archaeological record contains some elements (discussed below) that imply a divine provenance. In any case, he is one of the more ambiguous (and thus intriguing) characters in Nordic myth.

Völund's story, which is related in the Völundarkvitha section of the Poetic Edda,[4] is a chilling tale of abduction, betrayal, rape, murder, and revenge. It begins in the home of three bachelor brothers, Völund, Egil and Slagfiðr (Slagfid/Slagfinn), who venture out one night, only to come across three valkyries spinning flax by the river. After the young maidens had removed their swan cloaks (and were thus unable to fly away),[5] the brothers crept up, seized them, and brought them back to their home, where they took them as their wives. After nine years, "a longing for battle came over the Valkyries, and … they flew away."[6] When the brothers returned home from the hunt that day, they found themselves deserted:

Völund home | from his hunting came,
From a weary way, | the weather-wise bowman,
Slagfith and Egil | the hall found empty,
Out and in went they, | everywhere seeking.

As the only memento that the heartbroken Völund had of his beloved was her gold ring, he stayed at home and constructed replica after replica of it, gradually developing masterful metalworking and smithing skills.

Red gold he fashioned | with fairest gems,
And rings he strung | on ropes of bast;
So for his wife | he waited long,
If the fair one home | might come to him.[8]

Völund's smithy in the centre, Nidud's daughter to the left, and Nidud's dead sons hidden to the right of the smithy. Between the girl and the smithy, Völund can be seen in an eagle fetch flying away. From the Ardre image stone.

Soon after, tales of Völund's proficiency in metal-work reached the ear of King Nidud, the local sovereign. The king, desiring to use these skills for his own aggrandizement, kidnapped the smith, stole his sword and rings, and imprisoned him on an island. To make sure that his new charge could not escape, Nidud had Völund hamstrung (rendering him crippled and unable to walk). There he was forced to forge items for the king. Adding insult to injury, Weyland's wife's ring was given to the king's daughter, Bodvild, and the ungracious monarch kept and wore Weyland's sword. 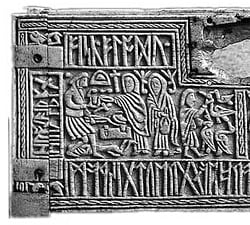 Depiction of the hamstrung smith Weyland from the front of the Franks Casket.

Trapped in his island prison, Völund had little else to do but plot revenge. First, he lured King Nidud's two young sons to his island:

Völund spake:
"Come ye alone, | the next day come,
Gold to you both | shall then be given;
Tell not the maids | or the men of the hall,
To no one say | that me you have sought."

Early did brother | to brother call:
"Swift let us go | the rings to see."

They came to the chest, | and they craved the keys,
The evil was open | when in they looked;
He smote off their heads, | and their feet he hid
Under the sooty | straps of the bellows.[9]

After decapitating the youths and hiding their bodies, Völund was able to proceed with his plan. In the next stage, like a gender-inverted version of the tale of Procnê and Tereus,[10] he constructs jewelry from their eyes (which he presents to the queen), chalices from their skulls (which he gives to the king), and brooches from their teeth (which he delivers to the princess). Furthering his evil aims, he later convinces the young princess to visit him on his island, where he bedevils her senses with poisoned beer and rapes her. His vengeance complete, Völund dons a swan cloak and flies to the king's bedchamber to gloat:

"Seek the smithy | that thou didst set,
Thou shalt find the bellows | sprinkled with blood;
I smote off the heads | of both thy sons,
And their feet 'neath the sooty | straps I hid.

"Their skulls, once hid | by their hair, I took,
Set them in silver | and sent them to Nithuth;
Gems full fair | from their eyes I fashioned,
To Nithuth's ([Nidud's]) wife | so wise I gave them.

"And from the teeth | of the twain I wrought
A brooch for the breast, | to Bothvild I gave it;
Now big with child | does Bothvild go,
The only daughter | ye two had ever."

Nithuth spake:
"Never spakest thou word | that worse could hurt me,
Nor that made me, Völund, | more bitter for vengeance;
There is no man so high | from thy horse to take thee,
Or so doughty an archer | as down to shoot thee,
While high in the clouds | thy course thou takest."[11]

With that, the dark antihero took flight, leaving the stunned royals to their grief and loss.
Laughing Völund | rose aloft,
But left in sadness | Nithuth sat.[12]

While the disturbing tale of Völund seems to merely be a tale of human depravity, certain religious elements can be seen in it. First, the smith is often referred to as "prince of the álfar (elves)" and "countryman of the álfar," which would seem to suggest his place within their ranks.[13] Second, the textual evidence also implies a similar link, as the Völundarkvitha is placed between two mythological poems (Thrymskvida and Alvíssmál) in the Codex Regius version of the Poetic Edda - which is odd, given that the text is divided into two parts: a mythological and a heroic section.[14] Thus, this placement makes an imputation concerning the central character's divinity. Third (and most explicit), elements of the tale can be found in the Germanic Thidreks Saga, which features many of the same events as the Völundarkvitha, but begins by describing Velent (Völund) as the son of a giant who learned the smithing craft from two dwarves.[15] Fourth, his mythological importance is attested to by the myriad archaeological clues to the myth's ubiquity, from its presence on crucifixes[16] to its inscription on burial caskets.[17] Finally, this divine attribution makes a certain sense of the poem's brutality, for "if Völund had been the divine figure he probably once was, the extreme nature of his 'justice' might have seemed acceptable in an ancient, primitive way, and indeed, as Kaaren Grimstad has pointed out, there remains about him something of the vengeful god confronting a human being who has injured him."[18]

However, and in spite of these details, it remains the case that the existing Völund is predominantly a human agent, meaning that his actions were to be judged by human standards. As McKinnell concludes:

Anglo-Saxons also seem to have had some doubts about the justice of Weland's revenge. '"Deor and Alfred's Boethius, Metrum 10, both avoid discussing it, and the Franks Casket carver is by implication hostile to him in juxtaposing the bringing of Bodvildr's ring with the gifts of the Magi to Christ - the vengeful old order set against the new merciful one. The poet of 'Völundarkvitha is enough of an artist to be more even-handed, and allows us our own view, but the tide of opinion was perhaps already running against such primitive 'justice,' and Völund's days as a hero were numbered.[19]