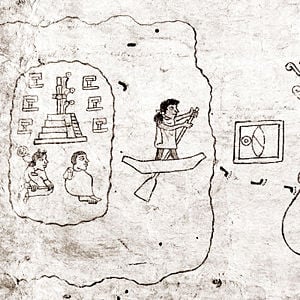 Detail of first page from the Boturini Codex, depicting the departure from Aztlán.

Aztec codices (singular codex) are books written by pre-Columbian and colonial-era Aztecs. These codices provide some of the best primary sources for Aztec culture.

The pre-Columbian codices differ from European codices in that they are largely pictorial; they were not meant to symbolize spoken or written narratives.[1] The colonial era codices not only contain Aztec pictograms, but also Classical Nahuatl (in the Latin alphabet), Spanish, and occasionally Latin.

Although there are very few surviving pre-conquest codices, the tlacuilo (codex painter) tradition endured the transition to colonial culture; scholars now have access to a body of around 500 colonial-era codices. 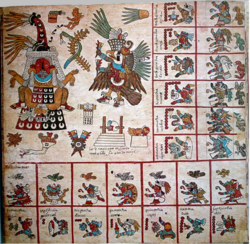 Page 13 of the Codex Borbonicus.

The Codex Borbonicus is a codex written by Aztec priests shortly before or after the Spanish conquest of Mexico. Like all pre-Columbian codices, it was originally entirely pictorial in nature, although some Spanish descriptions were later added. It can be divided into three sections:

The Boturini Codex was painted by an unknown Aztec author some time between 1530 and 1541, roughly a decade after the Spanish conquest of Mexico. Pictorial in nature, it tells the story of the legendary Aztec journey from Aztlán to the Valley of Mexico.

Rather than using separate pages, the author used one long sheet of amatl, or fig bark, accordion-folded into 21 and a half pages. There is a rip in the middle of the 22nd page, and it is unclear whether the author intended the manuscript to end at that point or not. Unlike many other Aztec codices, the drawings are not colored, but rather merely outlined with black ink.

Also known as “Tira de la Peregrinación” ("The Strip Showing the Travels"), it is named after one of its first European owners, Lorenzo Boturini Bernaducci (1702 – 1751). 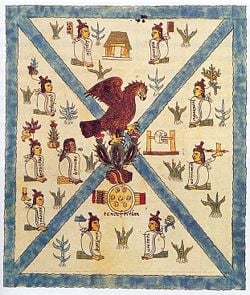 Part of the first page of Codex Mendoza, depicting the founding of Tenochtitlan.

The Codex Mendoza is a pictorial document, with Spanish annotations and commentary, composed circa 1541. It is divided into three sections: a history of each Aztec ruler and their conquests; a list of the tribute paid by each tributary province; and a general description of daily Aztec life.

The Florentine Codex is a set of 12 books created under the supervision of Bernardino de Sahagún between approximately 1540 and 1585. It is a copy of original source materials which are now lost, perhaps destroyed by the Spanish authorities who confiscated Sahagún's manuscripts. Perhaps more than any other source, the Florentine Codex has been the major source of Aztec life in the years before the Spanish conquest even though a complete copy of the codex, with all illustrations, was not published until 1979. Before then, only the censored and rewritten Spanish translation had been available. 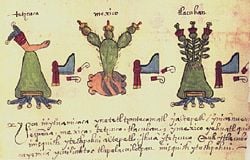 Section of page 34 of Codex Osuna showing the glyphs for Texcoco, Tenochtitlan, and Tlacopán.

The Codex Osuna is a set of seven separate documents created in early 1565 to present evidence against the government of Viceroy Luis de Velasco during the 1563-1566 inquiry by Jerónimo de Valderrama. In this codex, indigenous leaders claim non-payment for various goods and for various services performed by their people, including building construction and domestic help.

The Codex was originally solely pictorial in nature. Nahuatl language descriptions and details were then entered onto the documents during its review by Spanish authorities, and a Spanish translation of the Nahuatl was added.

The Aubin Codex is a pictorial history of the Aztecs from their departure from Aztlán through the Spanish conquest to the early Spanish colonial period, ending in 1607. Consisting of 81 leaves, it was most likely begun in 1576, it is possible that Fray Diego Durán supervised its preparation, since it was published in 1867 as Historia de las Indias de Nueva-España y isles de Tierra Firme, listing Durán as the author.

Among other topics, the Aubin Codex has a native description of the massacre at the temple in Tenochtitlan in 1520.

Also called "Manuscrito de 1576" (“The Manuscript of 1576”), this codex is held by the Bibliothèque Nationale in Paris. A copy of the original is held at the Princeton University library in the Robert Garrett Collection there. The Aubin Codex is not to be confused with the similarly-named Aubin Tonalamatl. 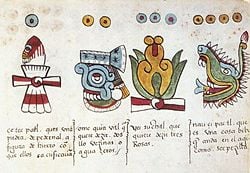 The Codex Magliabechiano was created during the mid-16th century, in the early Spanish colonial period. Based on an earlier unknown codex, the Codex Magliabechiano is primarily a religious document, depicting the 20 day-names of the tonalpohualli, the 18 monthly feasts, the 52-year cycle, various deities, indigenous religious rites, costumes, and cosmological beliefs.

The Codex Magliabechi has 92 pages made from European paper, with drawings and Spanish language text on both sides of each page.

It is named after Antonio Magliabechi, a seventeenth century Italian manuscript collector, and is presently held in the Biblioteca Nazionale Centrale, Florence, Italy.

The Codex Cozcatzin is a post-conquest, bound manuscript consisting of 18 sheets (36 pages) of European paper, dated 1572 although was perhaps created later than this. Largely pictorial, it has short descriptions in Spanish and Nahuatl.

The first section of the codex contains a list of land granted by Itzcóatl in 1439 and is part of a complaint against Diego Mendoza. Other pages list historical and genealogical information, focused on Tlatelolco and Tenochtitlan. The final page consists of astronomical descriptions in Spanish.

It named for Don Juan Luis Cozcatzin, who appears in the codex as "alcalde ordinario de esta ciudad de México" ("ordinary mayor of this city of Mexico"). The codex is presently held by the Bibliothèque Nationale in Paris.

The Codex Ixtlilxochitl is an early seventeenth century codex fragment detailing, among other subjects, a calendar of the annual festivals and rituals celebrated by the Aztec teocalli during the Mexican year. Each of the 18 months is represented by a god or an historical character.

Written in Spanish, the Codex Ixtlilxochitl has 50 pages comprising 27 separate sheets of European paper with 29 drawings. It was derived from the same source as the Codex Magliabechiano. It was named after Fernando de Alva Cortés Ixtlilxochitl (between 1568 & 1578 - c. 1650), a member of the ruling family of Texcoco, and is held in the Bibliothèque Nationale in Paris. 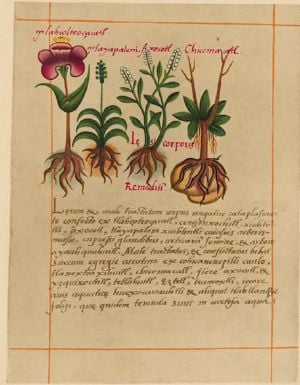 The Libellus de Medicinalibus Indorum Herbis (Latin for "Little Book of the Medicinal Herbs of the Indians") is a herbal manuscript, describing the medicinal properties of various plants used by the Aztecs. It was translated into Latin by Juan Badiano, from a Nahuatl original composed in Tlatelolco in 1552 by Martín de la Cruz that is no longer extant. The Libellus is also known as the Badianus Manuscript, after the translator; the Codex de la Cruz-Badiano, after both the original author and translator; and the Codex Barberini, after Cardinal Francesco Barberini, who had possession of the manuscript in the early seventeenth century.