The Zulu Kingdom (Zulu: KwaZulu), sometimes referred to as the Zulu Empire, was a Southern African state in what is now South Africa. The small kingdom gained world fame during and after the Anglo-Zulu War, not least of all for initially defeating the British at the Battle of Isandlwana in 1879. This led to the British annexing Zululand in 1887, although the office of king continued to be recognized (with the colonial title of Paramount Chief.) The Zulu, however, earned a reputation for their courage and skill as warriors even among the British, who tended to look down on Africans as inferior. Although the British downplayed their defeat, the spirit and example of the Zulu warriors lived on to inspire many in the anti-Apartheid struggle in white-dominated South Africa, where the Zulu nation became a "bantustan," or homeland. The Zulus had originally trekked or migrated to Southern Africa as part of the wider Bantu expansion and their Kingdom can be considered as one of many Bantu Empires, kingdoms and political entities that included the civilization of Great Zimbabwe.

The legacy of the Zulus is one of pride in a highly organized people who were able, at least initially, to resist the Scramble for Africa. As the European powers divided Africa up among themselves, they took possession of whatever territory they wanted, either without consulting Africans who occupied the land or by imposing treaties of protection backed by superior military force. Those who refused to sign these treaties, such as the Sultan of Sokoto and the Obo of Benin were quickly conquered. Only Ethiopia successfully resisted colonial occupation in the nineteenth century, although it was briefly ruled by Fascist Italy in the twentieth century. Zulus are the largest ethnic group in South Africa where, despite the oppression of the Apartheid years, they sustain pride in their heritage, history, and culture.

The rise of the Zulu kingdom under Shaka 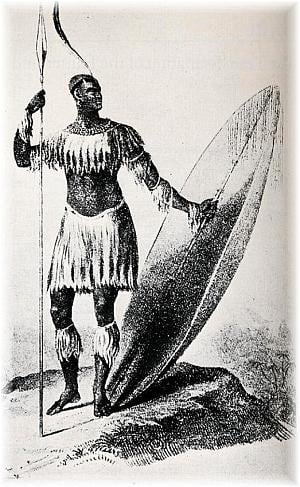 This is the only known sketch of Shaka, drawn in 1824.

The bloody ascendancy of Dingane

Shaka was succeeded by Dingane, his half brother, who conspired with Mhlangana, another half-brother, to murder him. Following this assassination, Dingane murdered Mhlangana, and took over the throne. One of his first royal acts was to execute all of his royal kin. In the years that followed, he also executed many past supporters of Shaka in order to secure his position. One exception to these purges was Mpande, another half-brother, who was considered too weak to be a threat at the time.

Clashes with the Voortrekkers and the ascendancy of Mpande

Nineteenth century Zulu warriors, Impi (Europeans can be seen at the rear).

In October 1837, the Voortrekker leader Piet Retief visited Dingane at his royal kraal to negotiate a land deal for the voortrekkers. In November, about 1,000 Voortrekker wagons began descending the Drakensberg mountains from the Orange Free State into what is now KwaZulu-Natal.

Dingane asked Retief and his party to recover some cattle stolen from him by a local chief. Retief and his men did so, returning on February 3, 1838. The next day, a treaty was signed, in which Dingane ceded all the land south of the Tugela River to the Mzimvubu River to the Voortrekkers. Celebrations followed. On February 6, at the end of the celebrations, Retief's party were invited to a dance, and asked to leave their weapons behind. At the peak of the dance, Dingane leapt to his feet and yelled "Bambani abathakathi!" (isiZulu for "Seize the wizards"). Retief and his men were overpowered, taken to the nearby hill kwaMatiwane, and executed. Some believe that they were killed for withholding some of the cattle they recovered, but it is likely that the deal was a ploy to overpower the Voortrekkers. Dingane's army then attacked and massacred a group of 500 Voortrekker men, women and children camped nearby. The site of this massacre is today called Weenen, (Afrikaans for "to weep").

The remaining Voortrekkers elected a new leader, Andries Pretorius, and Dingane suffered a crushing defeat at the Battle of Blood River on December 16, 1838, when he attacked a group of 470 Voortrekker settlers led by Pretorius.

Following his defeat, Dingane burned his royal household and fled north. Mpande, the half-brother who had been spared from Dingane's purges, defected with 17,000 followers, and, together with Pretorius and the Voortrekkers, went to war with Dingane. Dingane was assassinated near the modern Swaziland border. Mpande then took over rulership of the Zulu nation.

Following the campaign against Dingane, in 1839 the Voortrekkers, under Pretorius, formed the Boer republic of Natalia, south of the Thukela, and west of the British settlement of Port Natal (now Durban). Mpande and Pretorius maintained peaceful relations. However, in 1842, war broke out between the British and the Boers, resulting in the British annexation of Natalia. Mpande shifted his allegiance to the British, and remained on good terms with them.

In 1843, Mpande ordered a purge of perceived dissidents within his kingdom. This resulted in numerous deaths, and the fleeing of thousands of refugees into neighboring areas (including the British-controlled Natal). Many of these refugees fled with cattle. Mpande began raiding the surrounding areas, culminating in the invasion of Swaziland in 1852. However, the British pressured him into withdrawing, which he did shortly.

At this time, a battle for the succession broke out between two of Mpande's sons, Cetshwayo and Mbuyazi. This culminated in 1856 with a battle that left Mbuyazi dead. Cetshwayo then set about usurping his father's authority. In 1872, Mpande died of old age, and Cetshwayo took over rulership. A border dispute then occurred between the Boers and the Zulus in the Transvaal, which, now under British rule meant that they now adjudicated between the two sides. A commission favored the Zulu’s claim but the British governor added a clause requiring that the Zulus pay compensation to the Boers who would have to re-settle. 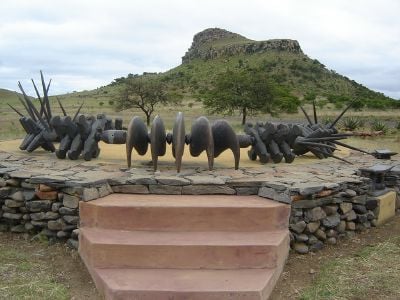 Background, Isandhlwana Hill. Foreground, monument to the dead Impi of the Zulu nation.

A series of incidents followed, all of which gave the British an excuse to express moral indignation and outrage about Zulu conduct. The estranged wife of a Zulu chief, for example, fled for safety into British territory where they killed her. Regarding this as a breach of their own law, the British, on December 10, 1878, sent an ultimatum to Cetshwayo demanding that he disband his army. When he refused, British forces crossed the Thukela river at the end of December 1878. The war took place in 1879. Early in the war, the Zulus defeated the British at the Battle of Isandlwana on January 22, but were severely defeated later that day at Rorke's Drift. The war ended in Zulu defeat at the Battle of Ulundi on July 4. Britain depended largely on her military prestige to subdue Africa and rule her colonies, less on actual strength in the field, as McLynn comments:

The supremacy of the colonial powers rested on credibility—the idea that behind a tiny handful of administrators, commissioners and missionaries, was a military behemoth that one called forth at one’s peril. This was why a serious military defeat, such as that inflicted by the Zulus at Isandhlwana in 1879, obliged the British to mobilize such force as was necessary to defeat Cetewayo, even though the empire at that time held no significant interests in that part of Africa.[2]

Even in defeat, however, the Zulu warriors earned the respect of the British. In white-dominated South Africa during the long struggle for citizenship and justice, the story of early Zulu resistance to white colonization was a source of inspiration for many Black South Africans.

Division and the death of Cetshwayo

Cetshwayo was captured a month after his defeat, and then exiled to Cape Town. The British passed rule of the Zulu kingdom onto 13 "kinglets," each with his own subkingdom. Conflict soon erupted between these subkingdoms, and in 1882, Cetshwayo was allowed to visit England. He had audiences with Queen Victoria, and other famous personages, before being allowed to return to Zululand, to be reinstated as king.

In 1883, Cetshwayo was put in place as king over a buffer reserve territory, much reduced from his original kingdom. Later that year, however, Cetshwayo was attacked at Ulundi by Zibhebhu, one of the 13 kinglets, supported by Boer mercenaries. Cetshwayo was wounded and fled. Cetshwayo died in February 1884, possibly poisoned. His son, Dinuzulu, then 15, inherited the throne.

Dinuzulu recruited Boer mercenaries of his own, promising them land in return for their aid. These mercenaries called themselves "Dinuzulu's Volunteers," and were led by Louis Botha. Dinuzulu's Volunteers defeated Zibhebhu in 1884, and duly demanded their land. They were granted about half of Zululand individually as farms, and formed an independent republic. This alarmed the British, who then annexed Zululand in 1887. Dinuzulu became involved in later conflicts with rivals. In 1906 Dinuzulu was accused of being behind the Bambatha Rebellion. He was arrested and put on trial by the British for "high treason and public violence." In 1909, he was sentenced to ten years' imprisonment on St Helena island. When the Union of South Africa was formed, Louis Botha became its first prime minister, and he arranged for his old ally Dinuzulu to live in exile on a farm in the Transvaal, where Dinuzulu died in 1913.

Dinuzulu's son Solomon kaDinuzulu was never recognized by South African authorities as the Zulu king, only as a local chief, but he was increasingly regarded as king by chiefs, by political intellectuals such as John Langalibalele Dube and by ordinary Zulu people. In 1923, Solomon founded the organization Inkatha YaKwaZulu to promote his royal claims, which became moribund and then was revived in the 1970s by Mangosuthu Buthelezi, chief minister of the KwaZulu bantustan. In December 1951, Solomon's son Cyprian Bhekuzulu kaSolomon was officially recognized as the Paramount Chief of the Zulu people, but real power over ordinary Zulu people lay with white South African officials working through local chiefs who could be removed from office for failure to cooperate. The British introduced the term “Paramount Chief” in various parts of their empire to designate recognized traditional rulers in a manner that left their own monarch as the only King, or Queen. Thus “kings” were demoted to “prince” or to Chief. Under Apartheid, the homeland (or Bantustan) of KwaZulu was created in 1950 and from 1970, all Bantu were considered citizens of KwaZulu, not of South Africa, losing their passports. KwaZulu was abolished in 1994 and is now within the province of KwaZulu-Natal. Pride in early Zulu resistance to the white domination and conquest of Africa helped to inspire many people during the anti-Apartheid struggle. Shaka was regarded as a national hero and many dramas re-enact the story of his life.[3] In 2004, thousands of Zulus rook part in a re-enactment of the victory Isandlwana marking its 125th anniversary.[4]