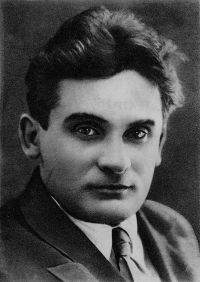 Yury Olesha (Russian: Юрий Карлович Олеша, (May 3, 1899 – May 10, 1960) was a Russian novelist during the early Soviet period. He is considered one of the greatest Russian novelists of the twentieth century, one of the few to have succeeded in writing novels of lasting artistic value that could make it past the stifling censorship of the era to be published. His works are delicate balancing acts that superficially send pro-communist messages, yet contain far greater subtlety and richness at a deeper level. Sometimes, he is grouped with his friends Ilya Ilf and Evgeny Petrov, Isaac Babel, and Sigismund Krzhizhanovsky into the Odessa School of Writers.

Olesha was born in Elizavetgrad (now Kirovohrad, Ukraine). He was brought up in Odessa where he moved with the family in 1902. He studied at the University of Novorossiya from 1916 to 1918. Three authors that influenced him most were H. G. Wells, Robert Louis Stevenson, and Leo Tolstoy. In Russia, Olesha's name is familiar because of his fairy tale Three Fat Men (1924), which Aleksey Batalov made into a movie in 1967. In English-speaking countries, he has been known for two books of short-stories that have appeared in English: Love and Other Stories and The Cherrystone—both concerned with dreams of adolescence. But his artistic reputation rests primarily upon his 1927 novel Envy.

As Soviet literary policy became more and more rigid, the ambiguity in Olesha's work became unacceptable. Less than a decade after the publication of Envy, he was condemned by the literary establishment and, fearing arrest, he ceased writing anything of literary value. Olesha died in 1960, too early to benefit from the Khrushchev "thaw," a later loosening of censorship. His remarkable diaries were published posthumously under the title No Day without a Line.

Envy (Russian: Зависть) is a landmark novel published in 1927 by the Russian novelist. It was acclaimed by Vladimir Nabokov as the greatest novel produced in the Soviet Union. It is remarkable for its poetic style, its undulating modes of transition between the scenes, its innovative structure, its biting satire, and its ruthless examination of socialist ideals.

The novel is about a pathetic young man named Kavalerov who refuses to accept communist values and is consumed by loathing and envy for his benefactor, Babichev, a model Soviet citizen who manages a successful sausage factory. With his former bourgeois friend Ivan, Kavalerov attempts to stage a comeback of all the old petty feelings that were crushed under communism. In the end, Ivan and Kavalerov are crushed by their own iniquity.

Envy received glowing reviews from throughout the Soviet literary establishment, including the premier literary magazine Pravda (Truth). Soviet reviewers took it as a condemnation of despicable bourgeois feelings. Yet Envy can equally be read as a searing indictment of the Soviet value system. There is something cold and inhuman about the novel's model Soviets, and something sympathetic about the bourgeois' earnest but doomed attempt to organize a "conspiracy of feelings." In a letter to Babichev, Kavalerov writes:

I am fighting for tenderness, for pathos, for individuality; for names that touch me [...], for everything that you are determined to oppress and erase (Envy, chap. 11, translation by Andrew R. MacAndrew).

Reading the novel in 1960, a reviewer for Time concluded that "Olesha once opposed Communism with such passion as to make Zhivago seem like a gentle reproof."

The true message of Envy likely lies somewhere in between these extremes. Olesha was aware of flaws in both capitalism and communism, and was not wholly sympathetic to either. During the Russian revolution, he was a strong supporter of communism, but he seems to have become gradually disillusioned after watching it in action. But Envy cannot be reduced entirely to a political statement; the book devotes much of its energy to exploring the psychology of its characters.

Engineers of the human soul (Russian: Инженеры человеческих душ) was a concept of culture promoted by Josef Stalin.

The phrase was originally coined by Olesha and then picked up and used by Stalin, first during his meeting with the Soviet writers in preparation for the first congress of the Union of Soviet Writers:

The production of souls is more important than the production of tanks.... And therefore I raise my glass to you, writers, the engineers of the human soul (Josef Stalin, Speech at home of Maxim Gorky, October 26, 1932).

Stalin undoubtedly saw it as something to be proud of. It was taken up by Andrei Zhdanov and developed into the idea of “socialist realism.”

The phrase is now mostly used in a negative sense, rejecting this and many other sorts of control. It is sometimes applied to the cultural controls of Nazis and less frequently to U.S. culture.

Mao Zedong used the same concept, though perhaps not the phrase itself:

Deng Xiaoping spoke approvingly of “engineers of the human soul” in the post-Mao era, while also condemning the “Gang of Four.”

This term is now used extensively in the People's Republic of China to refer to the teaching profession.

Retrieved from https://www.newworldencyclopedia.org/p/index.php?title=Yury_Olesha&oldid=1090517
Categories:
Hidden category:
This page was last edited on 2 December 2022, at 21:03.
Content is available under Creative Commons Attribution/Share-Alike License; additional terms may apply. See Terms of Use for details.