Yan Zhenqing (Simplified Chinese: 颜真卿; Traditional Chinese: 顏真卿; pinyin: Yán Zhēnqīng; Wade-Giles: Yen Chench'ing, 709–785) was a leading Chinese calligrapher and a loyal governor of the Tang Dynasty. Born to a family of scholars, Yan Zhenqing excelled in his studies and, after passing the imperial examinations, began an exceptional administrative career. His honesty and forthrightness, however, made him unpopular with officials at court, and he suffered several reversals. Yan distinguished himself during the An Shi Rebellion, winning several major battles. In 764, Emperor Daizong ( 唐代宗李豫 ) conferred the title of Duke of Lu (魯公) on Yan Zhenqing, in recognition of his firm loyalty to the government and his bravery. However, the incumbent Grand Councilor, Lu Qi (盧杞), resented his unbending character and deliberately sent him on a dangerous mission which cost him his life.

Yan’s artistic accomplishment in Chinese calligraphy parallels the greatest master calligraphers throughout the history. His style assimilated the essence of the previous 500 years, and almost all the calligraphers after him were more or less influenced by him. In his contemporary period, another great master calligrapher, Liu Gongquan, studied under him, and the much-respected Five-Dynasty Period calligrapher, Yang Ningshi (楊凝式) thoroughly inherited Yan Zhenqing’s style and made it bolder. The popularity of Yans style diminished after the Song dynasty, but modern scholars have drawn attention to it again, and it has become the textbook-style that every calligraphy student imitates today.

Yan Zhenqing was born in 709 in Linyi (臨沂) of Shandong Province (山東) to an established academic family which had served the court for many generations. His great-great grandfather Yan Shigu (顏師古) was a famous linguist, while his father Yan Weizhen (顏惟貞) was the Tang princes' private tutor and a great calligrapher himself. Under the influence of the family tradition and the strict instruction of his mother, Lady Yin (殷氏), Yan Zhenqing worked hard from his childhood and was well-read in literature and the Confucian classics. In 734, at the age of 22, Yan Zhenqing passed the national imperial examination and was granted the title of Jinshi (a rough equivalent of the modern day doctoral degree). He then gained the rare opportunity of taking a special imperial examination that was set for candidates with extraordinary talents, again excelling in it. With his outstanding academic background, Yan Zhengqing rose rapidly through the bureaucratic ladder; he was appointed vice-magistrate of Liquan District (醴泉尉), then later Investigating Censor (監察禦史) and Palace Censor (殿中侍禦史). His uprightness and outspoken style were admired by the common people, but angered Grand Councilor Yang Guozhong; as a result, in 753, he was sent out of the capital as the governor (Tai Shou) of Pingyuan province.

By the time Yan Zhenqing took up the post of governor of Pingyuan, the An Lushan Rebellion (安史之亂) was imminent. With his political sensitivity, Yan Zhenqing immediately started preparing for war by fortifying the city wall and stocking up provisions. He also sent an emergency memorial to Emperor Xuanzong (唐玄宗), but his warning was ignored.

In December 755, An Lushan (安祿山) and Shi Siming (史思明) rebelled under the pretext of removing Yang Guozhong. The ill-prepared Tang government troops retreated with little resistance from all the prefectures in the Heshuo (河朔) area (which includes the present day provinces of Shandong, Hebei and Henan); only Yan Zhenqing’s Pingyuan resisted. Yan Zhenqing then combined forces with his cousin, Yan Gaoqing (顏杲卿), the governor of Changshan (常山太守) (present day Quyang, Hebei), to attack the rebels from the rear. In desperation, the government promoted Yan Zhenqing to Deputy Minister of Finance (戶部伺郎), and conferred on him substantial military power to assist General Li Guangbi (李光弼) in a crackdown on the rebels.

Yans’ force won several major battles over the rebels, successfully cutting off their supply lines and regaining control over 17 commands in the Heshuo area. In 756, Emperor Suzong (肅宗) ascended the throne and promoted Yan Zhenqing to Minister of Works (工部尚書). Poorly planned military deployment by the Tang government, allowed An Lushan the opportunity to launch a surprise attack on Hebei, and Yan Zhenqing reluctantly abandoned his command, returning to the court in 757. He was then appointed Minister of Law (刑部尚書), but his outspokenness against corrupt higher-ranking officials resulted in his being constantly demoted and re-promoted.

In 764, Emperor Daizong (唐代宗李豫 ) conferred the title of Duke of Lu (魯公) on Yan Zhenqing, in recognition of his firm loyalty to the government and bravery during the An Lushan Rebellion. However, his unbendable character was resented by the incumbent Grand Councilor, Lu Qi (盧杞), and this cost him his life.

In 784, during the reign of Emperor Tang Daizong, Li Xilie (李希烈), the military commissioner of Huaixi (淮西節度使), rebelled. Lu Qi had held a grudge against Yan Zhenqing for a long time, so he sent Yan to negotiate with Li Xilie in the hope that he would be killed. Li Xilie captured Yan Zhenqing and tried by every means to coax or threaten him to surrender, but Yan never wavered. According to legend, Li Xilie set a fire in the courtyard and told Yan Zhengqing he would be burned to death if he did not surrender. Yan Zhenqing, without showing the slightest fear, walked determinedly towards the fire. Li Xilie could not help but show respect to him. In 785, Yan Zhenqing was secretly strangled in Longxing Temple (龍興寺) in Caizhou, Henan.

Upon hearing of his death, Emperor Daizong closed the assembly for five days and conferred the posthumous title Wenzhong (文忠) on Yan Zhenqing. He was also widely mourned by the army and the people, and a temple was constructed to commemorate him. During the Song Dynasty, the temple was moved to Shandong and became an important pilgrimage site.

Yan Zhenqing and his family were known for having an honest and forthright character; they would rather die than go against their principles. This quality was eulogized throughout Chinese history. Yan Zhenqing’s brother, Yan Aiqing, and nephew, Yan Jiming, were captured by An Lushan during the Anshi Rebellion. Yan Aiqing scathingly denounced An Lushan. An Lushan broke his bones, but he refused to retract his words. Then An Lushan cut out his tongue, but he never yielded. An Lushan killed Yan Aiqing and Yan Jiming in the most cruel way. When Yan Zhenqing heard the news, he was filled with grief and indignation, and wrote a funeral oration for his brother and nephew, the famous <<Ji Zhi Wen Gao>>.

Yan Zhenqing is popularly held as the only calligrapher who paralleled Wang Xizhi, the "Calligraphy Sage." He specialized in kaishu (楷) Script and Cao (草) Script, though he also mastered other writings well. His Yan style of Kai Script, which brought Chinese calligraphy to a new realm, emphasized on strength, boldness and grandness. Like most of the master calligraphers, Yan Zhenqing learned his skill from various calligraphers, and the development of his personal style can be basically divided into three stages.

Yan’s masterpiece, "Funeral Address for Nephew Ji-ming," (Ji Zhi Wen Gao) is said to be "the Second Best Running Hand in the World," and an intense emotion of sadness seems to break forth from the tip of his brush. [1]

Most calligraphers agree Yan Zhenqing’s early stage lasted until his 50s. During these years, Yan Zhenqing tried out different techniques and started to develop his personal genre. When he was young, he studied the calligraphy of Chu Suiliang, and later learned under the famous calligrapher, Zhang Xu. Zhang Xu was skilled in Cao Script, which emphasizes the overall composition and flow; Chu Suiliang, on the other hand, was renowned for his graceful and refined Kai Script. Yan Zhenqing also drew inspiration from Wei Bei (魏碑) Style, which was used for monuments such as votive steles and rock-cut sutras by the Northern nomad minorities and focused on strength and simplicity. His unique style represented a balance between propriety and Zhang Xu's wildness. The weight and lack of hesitation in his brushstrokes has long been associated with his physical and moral courage. [2]

In 752, he wrote one of his best-known pieces, Duobao Pagoda Stele (多寶塔碑).[3] The stele has 34 lines, each containing 66 characters, and it was written for Emperor Xuanzong who was extremely pious to Buddhism at the moment. The style of the writing was close to that of the early Tang calligraphers, who emphasized elegance and "fancifulness"; yet it also pursues composure and firmness in the stroke of the brush, structuring characters on powerful frames with tender management on brushline. 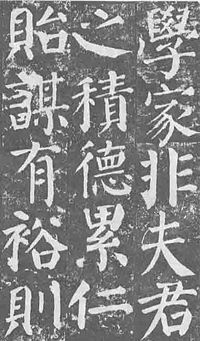 From his fifties until the age of 65, Yan Zhenqing wrote some famous pieces like Guojia Miao Stele (郭傢廟碑) and Magu Shan Xiantan Ji (痲姑山仙墰記). Yan had experienced the Anshi Rebellion and frequent reversals in his civil career, and his style was maturing. He increased his concentrated force while wielding the brush, and blended the techniques from zhuan (篆) and li (隷) Scripts into his own style, making the start and ending of his brush line gentler. For individual strokes, he adopted the rule of “thin horizontal and thick vertical strokes;” strokes’ widths were varied to show the curvature and flow, and the dots and oblique strokes were finished with sharp edges. For character structure, Yan style displayed squared shapes and modest arrangement, with spacious center portions and tight outer strokes; this structure resembles the more dated Zhuan and Li Scripts. The characters are vertically compact, leaving relatively more space in between lines. The emerging Yan style had abandoned the sumptuous trend of early Tang calligraphers; it was upright, muscular, fitting, rich and controlled, rather than sloped, feminine, pretty, slim, and capricious.

In the ten years before his death, Yan Zhenqing’s accomplishment in calligraphy peaked. With his style established, he continuously improved on each of his works, and completed his Magnum Opus, Yan Qingli Stele (顏勤禮碑). At this stage, he was able to fully exhibit his style at will, even through a single stroke; liveliness and passion emerged from behind the modesty and stateliness of his brush strokes

After Song, the popularity of Yan Zhenqing declined slightly, as calligraphers developed a tendency to try out more abstract ways of expression. However, it still held a position of importance, and many renowned calligraphers, such as Zhao Mengfu and Dong Qichang (董其昌) were said to have been inspired by Yan Zhenqing.

In contemporary China, leading calligraphers like Sha Menghai (沙孟海) and Shen Yinmo conducted extensive research on Yan style, and since then it has regained its popularity. Today, almost every Chinese calligraphy student imitates Yan style when he first picks up the brush, and Yan Zhenqing’s influence has also spread across the sea to Korea, Japan and Southeast Asia.

Retrieved from https://www.newworldencyclopedia.org/p/index.php?title=Yan_Zhenqing&oldid=1043895
Categories:
Hidden category:
This page was last edited on 15 October 2020, at 03:43.
Content is available under Creative Commons Attribution/Share-Alike License; additional terms may apply. See Terms of Use for details.