Wang Xizhi (Wang Hsi-chih, 王羲之) (303 – 361) was the most celebrated Chinese calligrapher, traditionally referred to as the Sage of Calligraphy (書聖). Wang Xizhi (Wang Hsi-chih) lived in the fourth century, during the Eastern Jin period, when a growing appreciation for expressive writing styles led to the first collecting and cataloging of the works of individual calligraphers. Wang Xizhi was equally skilled in cao shu (regular style); hsing shu (xing shu, running style), which features connections between individual characters and slightly abbreviated forms; and ts’ao shu (kai shu, grass style), which appears as though the wind had blown over the grass in a manner at the same disorderly and orderly. He produced a large number of works of calligraphy, but within 1700 years, all of his original works had been lost or destroyed in wars. Some of them, however, were preserved as copies, tracings, stone inscriptions and rubbings.

Wang Xizhi’s most famous work is Lantingji Xu (Preface to the Poems Composed at the Orchid Pavilion), composed in year 353. Written in semi-cursive script, it is the most well-known and most-copied piece of Chinese calligraphy. It describes a gathering of forty-two literati including Xie An and Sun Chuo (孙绰) at the Orchid Pavilion at Lanting near the town Shaoxing, Zhejiang during the Spring Purification Festival (Xiuxi), to compose poems and enjoy wine. The preface consists of 324 Chinese characters in 28 lines. It is also a celebrated work of literature, flowing rhythmically and giving rise to several Chinese idioms.

In China, Korea, and Japan, calligraphy is a pure art form. Chinese calligraphy is derived from the written form of the Chinese language, which is not alphabetical but is composed of characters, pictorial images representing words or sounds. Each character is written as a series of brush strokes within an invisible square. A great calligrapher is one who captures not only the correct position of the lines, but also the essence of each character’s meaning with his brush strokes.

Wang Xizhi (Wang Hsi-chih) and his son Wang Xianzhi (Wang Hsien-chih) who lived in the fourth century, are traditionally considered to be the greatest exponents of Chinese calligraphy. Few of their original works have survived, but a number of their writings were engraved on stone tablets, and rubbings were made from them. Many great calligraphers imitated their styles, but none ever surpassed them.

Wang Xizhi (Wang Hsi-chih) not only provided the greatest example of the regular style of writing, but created a new style by relaxing the arrangement of the strokes somewhat and allowing the brush to trail easily from one word to another. This is called hsing shu, or “running style,” as though the hand were walking fast while writing. This style led to the creation of ts'ao shu, or “grass style,” named for its appearance, as though the wind had blown over the grass in a manner at the same disorderly and orderly. Chinese words in “grass style” are greatly simplified forms of the regular style, and can be deciphered only by those who have practiced calligraphy for years. Grass style is used by the calligrapher who wishes to produce a work of abstract art.

Chinese calligraphy requires only ink, an ink stone, a good brush, and good paper (or silk), the “four treasures” found in a Chinese scholar’s study. A skilled calligrapher moves quickly and confidently, in a flowing motion, giving interesting shapes to his strokes and composing beautiful structures without any retouching, while maintaining well-balanced spaces between the strokes. Calligraphy requires years of practice and training.

The fundamental inspiration for Chinese calligraphy is nature. In regular style, each stroke suggests the form of a natural object. Every stroke of a piece of fine calligraphy has energy and life, poise and movement, and a force which interacts with the movement of other strokes to form a well-balanced whole.

Wang Xizhi (Wang Hsi-chih ) was a Daoist, and one of his most renowned works was a transcription of the Book of the Yellow Court. Daoists considered calligraphy as essential in the making of inscriptions and talismans; their efficacy was believed to depend on the precision of the strokes from which they were created. 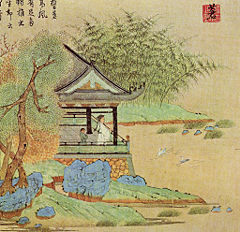 Wang Xizhi was born in 303 C.E. in Linyi, Shandong (臨沂; 山東), and spent most of his life in the present-day Shaoxing, Zhejiang ( 紹興; 浙江). He learned the art of calligraphy from Wei Shuo ( 衛鑠; 272–349), courtesy name Mouyi (茂猗), sobriquet He'nan (和南)), commonly addressed just as Lady Wei (衛夫人), a calligrapher of Eastern Jin, who established consequential rules about the regular script. He excelled in every script but particularly in the semi-cursive script (行書; pinyin: Xíngshū, Japanese: 行書 (gyōsho), Korean: 행서(haengseo)), a partially cursive style of Chinese calligraphy. Unfortunately, none of his original works remains today.

According to tradition, even during Wang Xizhi (Wang Hsi-chih)'s lifetime, just a few of his written characters or his signature were considered priceless. Through the ages, Chinese calligraphers have copied preserved examples of his style. Wang Xizhi (Wang Hsi-chih)'s memorial, written in hsing shu, or “running script,” has become the model for that particular style. The writing of the memorial itself became a historical incident and a popular subject for paintings, especially during the Ming dynasty (1368–1644) when interest in ancient arts was revived.

Wang Xizhi had seven children, all of whom were notable calligraphers. Among other generations of calligraphers in the family, Wang Xianzhi (Wang Hsien-chih, 344–386 C.E.), the youngest son of Wang Xizhi (Wang Hsi-chih), was the most famous.

Wang Xizhi is particularly remembered for his hobby rearing geese. According to legend, he learned the secret of how to turn his wrist while writing by observing how the geese move their necks.

Wang Xizhi was equally skilled in cao shu (regular style), hsing shu (xing shu, running style) and ts’ao shu (grass style). He produced a large number of works of calligraphy, but within 1700 years, all of his original works had been lost or destroyed in wars. Some hand copies of his calligraphy works include Lan Tin Xu, Sheng Jiao Xu, Shi Qi Tie, and Sang Luan Tie.

Lantingji Xu (“Preface to the Poems Composed at the Orchid Pavilion”)

Wang Xizhi’s most famous work is Lantingji Xu (Traditional Chinese: 蘭亭集序; Simplified Chinese: 兰亭集序; pinyin: Lántíngjí Xù; Wade-Giles: Lant'ingchi Hsü; literally "Preface to the Poems Composed at the Orchid Pavilion") or Lanting Xu (蘭亭序), composed in year 353. Written in semi-cursive script, it is the most well-known and most-copied piece of Chinese calligraphy. It describes a gathering of forty-two literati including Xie An and Sun Chuo (孙绰) at the Orchid Pavilion at Lanting near the town Shaoxing, Zhejiang during the Spring Purification Festival (Xiuxi), to compose poems and enjoy wine. The gentlemen had engaged in a drinking contest: wine cups were floated down a small winding creek as the men sat along its banks; whenever a cup stopped, the man closest to the cup was required to empty it and write a poem. In the end, twenty-six of the participants composed thirty-seven poems.[1]

The preface consists of 324 Chinese characters in 28 lines. The character zhi (之) appears 17 times, but no two look the same. It is also a celebrated work of literature, flowing rhythmically and giving rise to several Chinese idioms. It is a piece of improvisation, as can be seen from the revisions in the text.

Emperor Taizong of Tang liked Wang's calligraphy so much that he ordered a search for the original copy of Lanting Xu. According to legend, the original copy was passed down to successive generations in the Wang family in secrecy until the monk Zhiyong, dying without an heir, left it to the care of a disciple monk, Biancai. Tang Taizong sent emissaries on three occasions to retrieve the text, but each time, Biancai responded that it had been lost. Unsatisfied, the emperor dispatched censor Xiao Yi who, disguised as a wandering scholar, gradually gained of confidence of Biancai and persuaded him to bring out the "Orchid Pavilion Preface." Thereupon, Xiao Yi seized the work, revealed his identity, and rode back to the capital. The overjoyed emperor had it traced, copied, and engraved into stone for posterity. Taizong treasured the work so much that he had the original interred in his tomb after his death.[2] The story of Tang Taizong seizing the Lantingji xu has since the subject of numerous plays and novels.

The original is lost, but there are a number of fine tracing copies and rubbings.

In 648, Tang Taizong wrote an article about Xuan Zang's journey to the west, and wanted to carve the article onto stone. He loved Wang Xizhi's calligraphy, but Wang Xizhi had died hundreds of years ago. So he ordered Huai Ren to collect characters from Wang Xizhi's existing works of calligraphy. It took Huai Ren twenty-five years to collect all characters and put them together, since many of them were not the same size, to finish this project. Since Huai Ren was a master calligrapher himself, the finished work, Sheng Jiao Xu, looks just like Wang Xizhi's original work.[3]