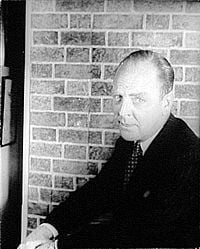 William Motter Inge (pronounced /ˈɪndʒ/ "inj";[1] (May 3, 1913 – June 10, 1973) was an American playwright and novelist, whose works typically feature solitary protagonists encumbered with strained sexual relations. In the early 1950s, he had a string of memorable Broadway productions, with one of these, Picnic, earning him a Pulitzer Prize. With his portraits of small-town life and settings rooted in the American heartland, Inge became known as the "Playwright of the Midwest."

Born in Independence, Kansas, Inge graduated from the University of Kansas in 1935 with a Bachelor of Arts degree in Speech and Drama. Offered a scholarship to work on a Master of Arts degree, he moved to Nashville, Tennessee, to attend the George Peabody College for Teachers, but later dropped out.

Back in Kansas, he worked as a laborer on the state highway and a Wichita news announcer. In 1937-38 he taught English and drama at Cherokee County Community High School in Columbus, Kansas. Completing his Master's at Peabody in 1938, he taught at Stephens College, in Columbia, Missouri, from 1938 to 1943.[2]

Inge began his literary career as a drama critic at the St. Louis Star-Times in 1943. With Tennessee Williams's encouragement, Inge wrote his first play, Farther Off from Heaven (1947), which was staged at Margo Jones' Theatre '47 in Dallas, Texas. While a teacher at Washington University in St. Louis in 1946–1949, he wrote Come Back, Little Sheba. It ran on Broadway for 190 performances in 1950, winning Tony Awards for Shirley Booth and Sidney Blackmer. The 1952 film adaptation won both an Oscar and a Golden Globe for Shirley Booth. Willy van Hemert directed a 1955 adaptation for Dutch television, and NBC aired another TV production in 1977.

In 1953, Inge received a Pulitzer Prize for Picnic, a play based on women he had known as a small child:

When I was a boy in Kansas, my mother had a boarding house. There were three women school teachers living in the house. I was four years old, and they were nice to me. I liked them. I saw their attempts, and, even as a child, I sensed every woman’s failure. I began to sense the sorrow and the emptiness in their lives, and it touched me.

Picnic had a successful Broadway run from February 19, 1953 to April 10, 1954. He followed with Bus Stop (1955) and The Dark at the Top of the Stairs (1957). The inspiration for the play Bus Stop came from people Inge met in Tonganoxie, Kansas.[3] All three were adapted into major films.

In 1953 his play Glory in the Flower was telecast on Omnibus with a cast of Hume Cronyn, Jessica Tandy and James Dean. His 1959 play A Loss of Roses, with Carol Haney, Warren Beatty and Betty Field, was filmed as The Stripper (1963), with Joanne Woodward, Richard Beymer and Claire Trevor, and a memorable Jerry Goldsmith score. In 1961, he won an Academy Award for Splendor in the Grass (Best Writing, Story and Screenplay - Written Directly for the Screen). John Frankenheimer directed All Fall Down (1962), Inge's screenplay adaptation of the novel by James Leo Herlihy.

One of Inge's greatest plays, Natural Affection, had the misfortune to open on Broadway during a newspaper strike, which lasted from December 8, 1962 until April 1, 1963. Thus, few were aware of the play, and fewer bought tickets. It lasted only 36 performances, from January 31, 1963 to March 2, 1963. What theatergoers missed was a powerful drama on the theme of fragmented families and random violence. As with Truman Capote's In Cold Blood, the inspiration for Natural Affection came from a newspaper account of a seemingly meaningless and unmotivated murder. The play centers on a single mother, Chicago department-store buyer Sue Barker (Kim Stanley). While troubled teen Donnie (Gregory Rozakis), Sue's illegitimate son, has been away at reform school, she has entered into a relationship with Cadillac salesman Bernie Slovenk (Harry Guardino). With Donnie's unexpected return to her Chicago apartment, conflicts escalate, and Donnie finds himself on an emotional precipice. The closing five minutes of the play introduces a new character, a young woman Donnie meets in the apartment hallway. He invites her into the apartment and, without warning, kills her as the curtains close. The Broadway production, directed by Tony Richardson, benefited from composer John Lewis's made-to-order background music, which was provided via tape recordings, rather than live performance, and worked in the same fashion as a film score.

In 1963, Inge was in meetings to develop a CBS series of one-hour filmed television dramas about a family in a midwestern town. The series with six continuing characters had the tentative title, All Over Town and was planned for the 1964-65 season. Instead, Inge did a play Out on the Outskirts of Town which was seen November 6, 1964, on NBC as part of the Bob Hope Presents the Chrysler Theatre series. It starred Anne Bancroft and Jack Warden with Inge taking the role of the town doctor.

Inge's The Last Pad premiered in Phoenix, Arizona in 1972. Originally titled The Disposal, the world premiere of The Last Pad was produced by Robert L. (Bob) Johnson and directed by Keith A. Anderson through the Southwest Ensemble Theatre. The production starred Nick Nolte and included Jim Matz and Richard Elmore (Elmer). The production moved to Los Angeles and opened just days after Inge committed suicide. The original production in Phoenix was proclaimed the Best Play of 1972 by the Arizona Republic, while the Los Angeles production brought awards to Nick Nolte and helped introduce him to the film industry and his subsequent film career.

The Last Pad is one of three of Inge's plays that either have openly gay characters or address homosexuality directly. The Boy in the Basement, a one-act play written in the early 1950s, but not published until 1962, is his only play that addresses homosexuality overtly, while Archie in The Last Pad and Pinky in Where's Daddy? (1966) are gay characters. Inge himself was closeted.[4] Summer Brave, produced posthumously on Broadway in 1975, is Inge's reworking of Picnic, as he noted:

It wouldn't be fair to say that Summer Brave is the original version of Picnic. I have written before that I never completely fulfilled my original intentions in writing 'Picnic' before we went into production in 1953, and that I wrote what some considered a fortuitous ending in order to have a finished play to go into rehearsal. A couple of years after Picnic had closed on Broadway, after the film version had made its success, I got the early version out of my files and began to rework it, just for my own satisfaction. Summer Brave is the result. I admit that I prefer it to the version of the play that was produced, but I don't necessarily expect others to agree. Summer Brave might not have enjoyed any success on Broadway whatever, nor won any of the prizes that were bestowed upon Picnic. But I feel that it is more humorously true than Picnic, and it does fulfill my original intentions.

Inge wrote two novels, both set in the fictional town of Freedom, Kansas. In Good Luck, Miss Wyckoff (Atlantic-Little, Brown, 1970), high-school Latin teacher Evelyn Wyckoff loses her job because she has an affair with the school's black janitor. The novel is a poignant tale of spinsterhood, racism, sexual tension and public humiliation during the late 1950s. Polly Platt wrote the screenplay for the 1979 film adaptation starring Anne Heywood as Evelyn Wyckoff.

My Son Is a Splendid Driver (Atlantic-Little, Brown, 1971) is an autobiographical novel that traces the Hansen family from 1919 into the second half of the twentieth century:

Our home now was in Freedom, a small, prosperous town in the southeastern part of Kansas where the geography was nothing like that of the flat, dry western half of the state where Mother and Father had met... As a child, I could not imagine my parents had ever lived anywhere except in the pretty and prosperous town that was now our home, with its spacious houses and wide green lawns, all tented over by the heavy foliage of great elm trees and maples, where the surrounding country was verdant and hilly... I had always been a good driver, maybe as good as Jule had been, even though I had no craving for speed or to drive in races or pilot an airplane. Yet, I always drove with a steady rhythm and good reflexive actions. I enjoyed driving on those summer evenings, just to relax and feel the breeze stirred up by the car's movement; and I enjoyed, too, the feeling of driving to reach a destination, the tranquilization of one's energies all being united to reach one goal. Yet, Mother had created in her mind a legend of Jule's driving that she liked to romanticize in her memory, and she never allowed anyone to rival him. And so I grew up with the knowledge that it was pointless for me to compete with her memory of Jule. Anything I attempted that Jule had ever done was certain to appear commonplace in Mother's judgment. She felt she owed him this peerless seat in her memory.[5]

Mr. lnge's novel, told in the form of a memoir, is a little more extended than Good Luck, Miss Wyckoff and though there's a slackening of structure and splintering of content towards the second half, the first part is immaculate in both design and focus. It features the early years of Joey, the narrator here, and there are lovely scenes, as clear as the summer sunlight, with his family and on visits to assorted relatives. The time lag between Joey and his older brother Jule—his mother's favorite, my son the splendid driver, and an attractive playboy of this midwestern world—will never be reconciled. Even long after Jule's early death from a wanton incidental. Here Act I breaks away from Act II, a whole psychic anatomy of Joey's years as a young man in compressed and fractured incidents—one replayed from Miss Wyckoff and one which seems unnecessary (his parents' syphilis). Thus Joey grows up impaired, never resolving his relationship with his absentee father or insufficiently loving mother, and ends up with his "aloneness like a corridor that has no end." Inge has told his story of life and death and all those spaces in between with a gentleness and probity which gives his novel a persistence few writers achieve.

During the early 1970s, Inge lived in Los Angeles, where he taught playwriting at the Irvine campus of the University of California. His last several plays attracted little notice or critical acclaim, and he fell into a deep depression, convinced he would never be able to write well again. He committed suicide by carbon monoxide poisoning in 1973.

He has a star on the St. Louis Walk of Fame.

Each year, in April, Independence Community College's William Inge Center for the Arts in Inge's hometown of Independence Kansas sponsors the William Inge Theatre Festival to honor playwrights. It began in 1982.