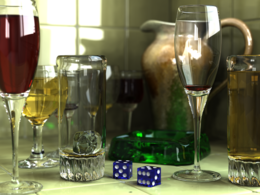 This image was created by Gilles Tran with POV-Ray 3.6 using Radiosity. The glasses, ashtray and pitcher were modeled with Rhino and the dice with Cinema 4D.

A virtual museum is a museum that houses collections in digital form and exhibits them via the Internet. Most virtual museums are part of physically existing museums that hold actual collections. A virtual museum refers to a broad range of websites from a simple personal website and portal site, a collection of links to museums and galleries, to a full scale website which has all functions of a museum.

A virtual museum can house digitally produced collections such as music, moving images, and images and documents. Due to hyperlinking capabilities, the exhibit can be linked to background information, related works, and other relevant sources. Some museums such as Musée Virtuel du Canada (MVC)/Virtual Museum of Canada (VMC) enable users to create his or her personalized virtual museum. Unlike a physical museum, a virtual museum can be open twenty-four hours, seven days a week, and host visitors from all over the world.

Some individuals such as artists and photographers also create personal virtual museums to exhibit his or her collections online. A notable local community based virtual museum is ArtServe. It was established in 1993 to support cultural organizations and artists in Broward County, Florida, USA. It has been widely recognized as a model organization for the support of the arts.

A virtual museum has a number of distinct characteristics. Some main features are:

A collection can include moving images, sound files such as music and narration as well as still images and documents or a combination of these.

Each exhibit can be hyperlinked to other relevant information sources such as background information, the artist's biography with photos, other works by the same artist, and a link to collections held at other museums.

Virtual museums do not have physical limitations. Exhibits can be viewed by an indefinite number of visitors from all over the world. Even a small museum located in a remote area can offer its services and exhibit its collection to a global audience. In addition, an individual artist can establish his or her own mini-virtual museum to reach a broader audience. For example, Lin Hsin Hsin, an artist in Singapore who is also an early pioneer of the virtual museum, established the Lin Hsin Hsin Art Museum (a virtual museum) in 1994.[1]

Establishing a decent museum as a physical facility requires a prohibitive amount of funds which make it nearly impossible to open a new museum for ordinary individuals, institutions, or communities. The creation of a virtual museum, however, is possible with far lower cost than that of a regular museum.

A virtual museum is generally open twenty-four hours and seven days as a week. The National Virtual Museum of United Kingdom is also a "Hour Museum."

Origins of the Virtual Museum

The technology of virtual museum builds on the concept of the interactive environment that displays visual representations of the museum using 3D modelling and the VRML (Virtual Reality Modelling Language) authoring tool for viewing. There have been various kinds of imaging techniques for building virtual museums, such as, infrared reflectography, X-Ray imaging, 3D laser scanning, IBMR (Image Based Rendering and Modelling) techniques. In the case of EU-funded projects, the ViHAP3D, a new virtual reality system, for scanning museum artifacts has been developed by EU researchers.

The genre of the virtual museum continues to develop. It is now recognized in the .museum domain hierarchy; see an online list from MuseDoma. 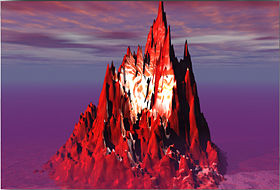 Many museums have been pioneers in developing websites for their collections, which gradually developed into a virtual museum, such as The Natural History Museum of Los Angeles County. The Museum of the History of Science in Oxford (located in one of the earliest purpose-built museum buildings in the world) was able to initiate a website relatively early because of the networking facilities and expertise available in their university environment; the Science Museum in London was also able to establish an early web presence partly due to the proximity of the Imperial College, but also because the Natural History Museum, which is next door, had established the first dedicated museum web server in the United Kingdom.

Another early example of an online exhibition created with support from the Library of Congress (U.S.) was the EXPO Ticket Office with includes a Vatican Exhibit. Some others have been produced by enthusiastic individuals such as the Lin Hsin Hsin Art Museum, while others have been developed by institutions, such as the UK's 24 Hour Museum and the Virtual Museum of Canada.

The Virtual Museum of Canada (VMC) is Canada's national virtual museum. With over 2,500 Canadian museums, the VMC brings together Canada's museums regardless of size or geographical location. The VMC includes virtual exhibits, free online games, educational material, and over 580000 images. The resources are bilingual—available in both French and English. While the content on the Virtual Museum of Canada is created by Canadian museums, it is administered by the Canadian Heritage Information Network which is an agency within the department of Canadian Heritage.

The Virtual Museum of Canada provides an online environment for Canadian communities to tell their stories and preserve their history. One of the most popular sections of the VMC is their Community Memories section. This is a place where smaller Canadian community museums, who are mostly volunteer run, can create online exhibits about their history.

The Virtual Museum of New France (French: Le Musée virtuel de la Nouvelle-France) was established by the Canadian Museum of Civilization Corporation on January 22, 1997. As an entirely virtual museum, it has no physical exhibits and only exists on the World Wide Web. The mission of the museum is to promote awareness of all facets of life in New France, as it existed from the sixteenth century until the Treaty of Paris (1763). When it opened, it claimed to be "the only museum without walls in the world."[3]

One of the most successful and comprehensive of the virtual museums is the Museum of Computer Art, often identified by its acronym MOCA. It was founded in 1993 and is directed by Don Archer. It operates as a non-profit corporation under charter from the Department of Education of New York State (US). It was awarded .museum top-level domain (TLD) status by the Museum Domain Management Association (MuseDoma) in 2002.

There are numerous web based museums, ranging from a portal site to a fully functional virtual museum. A sampling is listed below.

Retrieved from https://www.newworldencyclopedia.org/p/index.php?title=Virtual_museum&oldid=1087955
Categories:
Hidden category:
This page was last edited on 18 November 2022, at 00:53.
Content is available under Creative Commons Attribution/Share-Alike License; additional terms may apply. See Terms of Use for details.