Trichoptera is an order of moth-like, holometabolous insects, known commonly as caddisflies (or caddis flies), with aquatic, silk-spinning, caterpillar-like larva and adults that have long antennae and four, large, hair-covered wings that typically are without scales and are held tent-like over the abdomen. The larvae and pupae are mainly found in freshwater habitats, but marine and terrestrial species are known. There are about 12,000 known species of caddisflies. Other common names include sedge-flies and rail flies.

Caddisflies provide important ecological functions as part of food chains, with the largely liquid consuming adults and the often omnivorous and detrivorous larvae providing an important food source for various fishes and other aquatic animals. They also help to filter the water of debris.

For humans, caddisfly larval cases have been used as earrings and necklace beads, and fly-fishing for various species, such as trout and salmon, has lead to the creation of artificial flies meant to resemble particular species and stages (larval, pupae, and adults). They also are an indicator species. Although caddisflies may be found in waterbodies of varying qualities, species-rich caddisfly assemblages are generally thought to indicate clean water. Together with stoneflies and mayflies, caddisflies feature importantly in bioassessment surveys of streams and other water bodies.

Both the larva, pupal, and adult stages of members of the order Trichoptera are moth-like in appearance, and the Trichoptera are considered to be closely related to members of the order Lepidoptera (moths and butterflies). Together, the two orders form the superorder Amphiesmenoptera. However, Lepidoptera means "scaly-winged insects" (lepidos means "scales," and pteron means "wings" in Greek), and lepidopterans have fine scales on their wings. Members of Trichoptera (caddisflies) typically lack scales on their wings.

The larval caddisfly resembles a caterpillar, which is the larval stage of a member of the order Lepidoptera. Caddisfly larvae have strong chewing mouthparts, a hardened (heavily sclerotized) head, three pairs of legs on the thorax, dorsal plates on the first thoracic segment or all three thoracic segments, and a membranous abdomen with the last segment with a pair of hook-bearing anal prolegs (Angrisano 2004). The larvae of many species make protective cases of silk decorated with gravel, sand, twigs, or other debris; others are free-living. All larva produce silk, which they spin to produce cases, cocoons, retreats, or nets (Angrisano 2004).

The delicate pupal caddisfly have sharp mandibles (for escaping the cocoon at the end of this stage).

The adult caddisfly resembles an adult moth. Most have slender and very long antennae, which commonly are placed together and directed forward and often are longer than their body. Mouthparts are reduced, and the caddisfly adult mostly consumes only liquids, such as nectar or sap. Caddisfly adults have two pairs of large wings covered with hair. (The name Trichoptera comes from Greek trich, meaning "hair," and ptera, meaning "wings.") The wings rarely have scales. When at rest, the wings are held roof-like over the abdomen (Angrisano 2004). 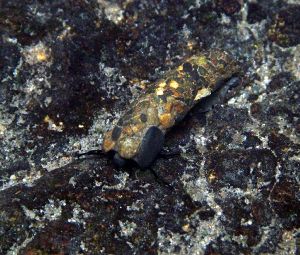 Caddisflies are considered underwater architects because most species use silt for building throughout their larval life.

Caddisfly species can be found in all feeding guilds in stream habitats, with some species being predators, leaf shredders, algal grazers, and collectors of particles from the watercolumn and benthos.

Almost all adult caddisflies consume only liquids, such as sap or flower nectar, although some are predaceous. The aquatic larvae may consume algae, plant matter, animal matter, detritus, and suspended particles. Some are predaceous. The free-living caddisflies may be predators or filter-feeders, while the case-makers may graze on plants or scrape algae from surfaces (Angrisano 2004).

Caddisflies are found around the world, with the aquatic larvae and pupae mostly found in freshwater environments, such as streams, rivers, lakes, ponds, spring seeps, and temporary waters (vernal pools). Some species have larvae that are terrestrial, such as Enoicyla pusilla (land caddis) of the Leptoceridae family, which is found in leaf litter and moss (Harding 1998; Green and Westword). The larvae of the species Philansius plebeius of the Chathauiidae family live in a marine habitat (Angrisano 2004). The freshwater larvae typically are found in rivers and streams that are cold, unpolluted, and well-oxygenated, but some are found in slow-moving and warm waters (Angrisano 2004). 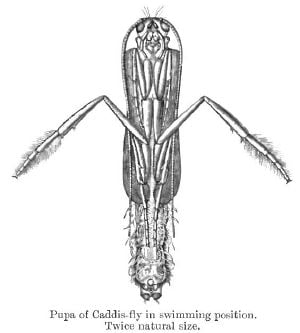 Caddisflies are holometabolous insects, meaning they undergo a complete metamorphosis where the larvae differ markedly from the adults. Insects that undergo holometabolism pass through a larval stage, then enter a non-feeding, outwardly inactive state as a pupa, and finally emerge as adults (imago). In the caddisflies, the larvae looks more like a worm than the adult flying insect, but does have the typical three pairs of jointed legs. It undergoes a series of molts as it increases in size, going through a series of instars.

Caddisfly pupation occurs much like pupation of Lepidoptera. That is, at the end of the larval stage, caddisflies construct a cocoon spun from silk in which to pupate. For the larvae that are free-living or build retreats and nets, they create a cocoon that typically is a double case with a inner wall of silk and an external wall of loosely stacked stones. For the case-making caddisflies, they may remodel their last case, sticking it to the substrate and building a second silken case inside, or build a case in their last larval instar that serves for pupation. Caddisflies that build the portable cases attach their case to some underwater object, seal the front and back apertures against predation though still allowing water flow, and pupate within it.

Many species of caddisfly larvae enter this stage of inactivity called the pupa stage for weeks or months after they mature but prior to emergence. Their emergence is then triggered by cooling water temperatures in the fall, effectively synchronizing the adult activity to make mate-finding easier.

Once fully developed, most pupal caddisflies cut through their cases with a special pair of mandibles, swim up to the water surface, cast off skin and the now-obsolete gills and mandibles, and emerge as fully formed adults. In a minority of species, the pupae swim to shore (either below the water or across the surface) and crawl out to emerge. Many of them are able to fly immediately after breaking from their pupal skin.

The adult stage of caddisflies, in most cases, is very short-lived, usually only one or two weeks, but can sometimes last for 2 months. Most adults are non-feeding and are equipped mainly to mate. Once mated, the female caddisfly will often lay eggs (enclosed in a gelatinous mass) by attaching them above or below the water surface. Eggs hatch in as little as three weeks.

Caddisflies in most temperate areas complete their life cycles in a single year. The general temperate-zone life cycle pattern is one of larval feeding and growth in autumn, winter, and spring, with adult emergence between late spring and early fall, although the adult activity of a few species peaks in the winter. Larvae are active in very cold water and can frequently be observed feeding under ice.

In common with many aquatic insect species, many caddisfly adults emerge synchronously en masse. Such emergence patterns ensure that most caddisflies will encounter a member of the opposite sex in a timely fashion. Mass emergences of this nature are called "hatches" by salmon and trout anglers in the United States, and salmonid fish species will frequently "switch" to whatever species is emerging on a particular day. Anglers take advantage of this behavior by matching their artificial flies to the appropriate fly.

There are about 12,000 known extant caddisfly species, placed in about 45 families and 600 genera; however, it is estimated that there are many more species yet to be identified and a full total of the world fauna may reach 50,000 species (Holzenthal et al. 1997).

Caddisflies typically are placed into the three suborders of Annulipalpia, Integripalpia, and Spicipalpia (Fauna Europeae 2004; Holzenthal et al. 1997), although some only recognize Annulipalpia and Integripalpia (Angrisano 2004). Members of Annulipalpia are the net spinners and retreat makers, while members of Integripalpia are the tube case makers. Spicipalpia includes a diversity of groups with different larval habitats, some of which are free living, predaceous, and pupate within an enclosure of mineral fragments; some of which are free-living until the last larval instar and then make a case; and some of which make a tortoise case made similar to the pupal cases of the other two suborders but with a strap allowing it to be carried on the insects back (Holzenthal et al. 1997). Even within the tube case makers of Integripalpia, there is a lot of diversity in the construction of the case among the various species.