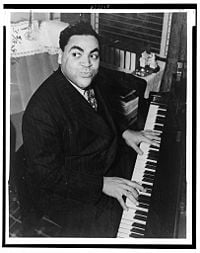 Fats Waller (May 21, 1904 – December 15, 1943) was an African-American jazz pianist, organist, composer, and entertainer. Fats Waller is one of the most beloved personalities in American music and one of jazz music’s brightest stars. Though many knew him for his clown-like antics, he was primarily a beautiful pianist and organist who could create a type of spontaneous excitement impossible to replicate. Fats brought the stride style of piano playing fully into the swing era, both as a solo player and as the leader of a legendary small combo. He used his impeccable technique to produce a uniquely bouncy swing and improvise brilliantly.

Fats was born Thomas Wright Waller in Passaic, NJ to a Baptist minister father who would strongly resist Fats' passion for jazz. The Waller family migrated to Harlem from Virginia. Fats' grandfather, Adolph Waller was an accomplished violinist.

Waller started his musical career at an early age. He studied classical piano and organ as a child, taught largely by the music director of his Baptist church, who insisted he also learn the organ works of J. S. Bach. As a young adult, Waller took regular piano lessons from legendary Harlem stride pianist James P. Johnson. He also benefited from another legend of stride piano, Willie "The Lion" Smith, who gave Fats the nickname "Filthy." Fats also had extensive classical piano training and reportedly took classes at Julliard.

Johnson introduced Waller to the world of rent party (parties with a piano player, designed to help pay the rent by charging the guests), and soon Waller developed a performing career.

He was an excellent pianist—considered one of the very best who ever played in the stride style. Many believe that his songwriting and his lovable, roguish stage personality often overshadowed his playing. Before his solo career, he played with many performers, from Erskine Tate to Bessie Smith, but his greatest success came with his own five- or six-piece combo, "Fats Waller and his Rhythm". His band’s engagement with RCA Victor began in 1934, when he permanently replaced Jelly Roll Morton, until his death in 1943.

Fats had one of the commercially most successful careers of any black jazz musician, even if this came to some extent at the cost of eclipsing his great musical talent—something Fats would often lament about. His nickname came about because he weighed nearly 300 pounds (136 kg). His weight and drinking are believed to have contributed to his death. In his vocals, he would frequently refer to the alimonies he was forced to pay (and often did not pay) to his estranged wife.

Waller also made a successful tour of the British Isles in the late 1930s, and appeared in one of the earliest BBC Television broadcasts. While in Britain, Waller recorded a number of songs for EMI on their Compton Theatre organ located in their Abbey Road Studios in St John's Wood, London. He also recorded his six-part “London Suite” in 1939. He also appeared in several feature films and short subject films, most notably "Stormy Weather" in 1943, which was released only months before his death.

With his friend and frequent collaborator Andy Razaf he wrote, among many other songs, "What Did I Do (To Be So Black and Blue)?" 1929 which became a hit for Louis Armstrong. This song, a searing treatment of racism, black and white, calls into question the accusations of "shallow entertainment" leveled at both Armstrong and Waller.

On December 15, 1943, at age 39, Waller died of pneumonia aboard an eastbound train in the vicinity of Kansas City, Missouri, following a west coast engagement.

In spite of all his other accomplishments, Fats primarily remains on of the greatest jazz pianists of all time. “I Wish I Were Twins,” one of Fats’ standard tunes, best expresses the dual character of his personality, both as a pianist and as a human being (Fats, incidentally, was a Gemini). His huge left hand allowed him to play the stride piano’s tenths with ease, making the presence of a bass in the rhythm section optional. While he had the power of an elephant, Fats also had the grace of a butterfly, especially when his right hand would play a flurry of notes around the melody. Meditative seriousness also frequently cohabitated with joyful exuberance in the very same recording.

Fats Waller and his Rhythm

The main source of his fame, Fats’ “Rhythm” was a small studio band made up of a variety of musicians with whom he recorded hundreds of titles during the last 10 years of his life. Though the Rhythm as exclusively a studio band (whose members only came together to make recordings), there was a stable core that contributed to the feeling of extreme ease and confidence, in spite of the absence of reestablished arrangements. Waller liked spontaneity so much that often the members of his band had no idea what they would play before the recording. Fats’ powerful, yet social personality allowed even comparatively mediocre musicians to shine well beyond their usual abilities.

Fats is probably the only musician who ever made a large church organ (an instrument his size) swing, and he did so without making it lose any of its dignity. From the early days on, Fats’ career on organ developed in parallel to his piano career. Though his playing on that instrument represents a relatively small part of his production, he is quoted as saying that the organ was dear to his heart, while the piano was dear to his stomach (providing the money he needed). This statement cannot take anything away from his artistry on the piano. But it is true that in 1927 already, when his stride piano had not yet reached the full “bouncy” flexibility that would be his trademark beginning in the 1930s, his organ style was mature.

Fats Waller is the first great organist of jazz. Unlike his successors, he did not primarily play on the Hammond B3 electric organ, but rather on pipe organs—concert organs or church organs. His performances on that instrument include spirituals (Deep River, Go Down Moses, 1938), blues (Beale Street Blues, with singer Alberta Hunter, 1927), and pieces that can rival the comic quality of his piano performances, complete with the usual humorous vocals (You Can’t Have Your Cake And Eat It, London, 1939). Most of these performances, even those that are secular in nature, have a special spiritual quality reminiscent of Waller’s childhood in church. In that, they are typical of jazz—a music that is clearly secular but has strong spiritual roots. Occasionally, Fats played the organ in bands (The Chant, with Fletcher Henderson, 1926) and he was briefly the mentor of Count Basie on that instrument.

Fats Waller’s singing is nearly inseparable from his piano playing. Fats did not have Louis Armstrong’s voice quality. However, he was able to use his vocal organ to incredible comical effect, without ruining the quality of his music. In many ways, Fats was his singing. Fats had a particular fondness for beautiful melodies, but he was often forced to use sub-standard commercial material with awful lyrics—lyrics he destroyed with a vengeance by turning them into ridicule. In doing this, and by redeeming the poor material with his piano improvisation, he paradoxically saved many of these pieces from total oblivion.

Waller was fortunately also able to perform excellent material, often his own. As a composer, Duke Ellington is probably the only one to exceed him in quantity. Among Fats Waller’s best-known songs are "Squeeze Me" (1925), "Keepin' Out of Mischief Now", "Ain't Misbehavin'" (1929), "Blue Turning Grey Over You" (1930), "Honeysuckle Rose" (1929), "Handful of Keys", "I've Got a Feeling I'm Falling" (1929), and "Jitterbug Waltz" (1942). All of these songs have an easily recognizable, joyful melody and they are great vehicles for improvisation. Charlie Parker used the chordal harmonies of “Honeysuckle Rose” to compose his “Scrapple from the Apple.”

Just as he was influenced by his elders, particularly James P. Johnson, Waller had himself a considerable influence on other pianists. Most important among them are Art Tatum, the ultimate virtuoso of the instrument, and Count Basie. Directly and indirectly, his influence reached much further. Free jazz pianist Cecil Taylor entitled one of his first compositions “Wallering” (Looking Ahead! 1958). Contemporary pianist and singer Diana Krall once stated that she learned every single one of Fats’ solos by heart in her early days. Waller also had many imitators. Needless to say, nobody has managed to quite recreate the atmosphere of his playing.

Though Waller could read and write music well (from his classical keyboard studies as a child) and would even, on occasion, perform organ works of Bach for small groups, his brilliant improvisations have had to be transcribed from old recordings and radio broadcasts. The pianist and keyboard professor Paul Posnak has recently produced transcriptions of 16 of Waller's greatest solos, published by Hal Leonard, and himself performs these in concerts worldwide. In 1978, a Broadway musical entitled Ain't Misbehavin' was produced. Performed by five African American actors, it showcased the works of Waller in the style of a musical revue and included such songs as "Honeysuckle Rose," "The Joint is Jumpin'," and "Ain't Misbehavin'." The show opened at the Longacre Theatre and ran for over 1600 performances. Fats Waller is a 2005 inductee of Jazz at the Lincoln Center’s Nesuhi Ertegun Jazz Hall of Fame.

Fats Waller was such an impressive and talented pianist that he came to the attention of the rich and famous—sometimes whether he wanted to or not. Fats Waller was in Chicago in 1926 and, upon leaving the building where he was performing, Waller was kidnapped by four men, who bundled him into a car and drove off. The car later pulled up outside the Hawthorne Inn, owned by infamous gangster Al Capone. Fats was ordered inside the building, to find a party in full swing. With a gun against his back, Waller was pushed towards a piano, whereupon the gangsters demanded he start playing. A terrified Waller suddenly realized he was the "surprise guest" at Al Capone's birthday party. Soon comforted by the fact that he wouldn't die, Waller played, according to rumor, for three days. When he left the Hawthorne Inn, he was very drunk, extremely tired, and had earned thousands of dollars in cash given to him by Capone himself and by partygoers as tips.

Some of Waller's favorite quips: "One never knows, do one?" "Mercy!" "Well all right then!" "I wonder what the poor people are doing...I'd love to be with them!" "Run into and stab me, but don't bruise me!" "Your serial number is… (after completing a musical take)."

Retrieved from https://www.newworldencyclopedia.org/p/index.php?title=Thomas_Fats_Waller&oldid=1032895
Categories:
Hidden category:
This page was last edited on 24 February 2020, at 04:33.
Content is available under Creative Commons Attribution/Share-Alike License; additional terms may apply. See Terms of Use for details.