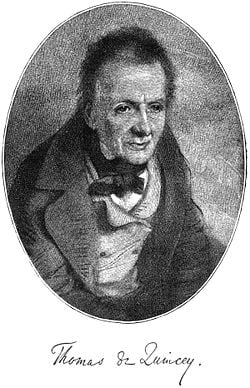 Thomas de Quincey from the frontispiece of Revolt of the Tartars,

Thomas de Quincey (August 15, 1785 – December 8, 1859) was an English author, intellectual, and polymath, who wrote on subjects as various as politics, English literature, drug addiction, German metaphysics, and science. Although he was a close confidant of the Lake School of Poets, and a personal friend for many years of both William Wordsworth and Samuel Taylor Coleridge, de Quincey's wrote in almost total obscurity until the infamous publication of his book Confessions of an English Opium-Eater. First published in 1821 as a serial in London Magazine, Quincey would go on to revise the Confessions periodically throughout his life, and the book remains the single most memorable work attributed to him. De Quincey, like Coleridge, struggled with opium addiction through much of his adult life. His costly addiction had only compounded his constant financial woes. He had a large family to support on a pitiful salary as a hack newspaper writer. The publication of the Confessions, however, catapulted De Quincey into permanent fame; he would go on to be one of the most revered authors of English non-fiction in the history of the language.

The Confessions, and De Quincey himself, are notable not just for their preoccupation with some of the seedier issues of London life. It is true that one of the reasons for De Quincey's immediate success was his boldness in taking on a subject like drug addiction which had previously been taboo. But what has caused De Quincey's writings to endure and be returned to by dozens of accomplished authors—Colerdige, Edgar Allen Poe and Jorge Luis Borges among them—is more than just seedy and scandalous subject-matter. De Quinecy's lively, imaginative prose is considered some of the most enjoyable writing in all of English literature, and ranks alongside the works of Sir Thomas Browne and the prose of Coleridge as among the most erudite and rewarding of all English non-fiction. Although De Quincey has always been a somewhat obscure author of the nineteenth-century English Romanticism, he is nonetheless one of its most significant and unique voices.

De Quincey was born in Manchester. His father was a successful businessman with an interest in literature who died when Thomas was quite young. Soon after Thomas's birth the family moved to The Farm and then later to Greenhay, a larger country house near Manchester. In 1796, De Quincey's mother, now a widow, moved to Bath and enrolled him at King Edward's School, Bath.

Thomas was a weak and sickly child. His youth was spent in solitude, and when his elder brother, William, came home, he wreaked havoc in the quiet surroundings. De Quincey's mother was a woman of strong character and intelligence, but seems to have inspired more terror than affection in her children. She brought them up very strictly, taking Thomas out of school after three years because she was afraid he would become big-headed, and sending him to an inferior school at Winkfield in Wiltshire.

In 1800, De Quincey, aged fifteen, was ready for the University of Oxford; his scholarship was far in advance of his years. "That boy," his master at Bath School had said, "that boy could harangue an Athenian mob better than you or I could address an English one." He was sent to Manchester Grammar School, in order that after three years' stay he might obtain a scholarship to Brasenose College, Oxford, but he took flight after 19 months.

His first plan had been to reach William Wordsworth, whose Lyrical Ballads (1798) had consoled him in fits of depression and had awakened in him a deep reverence for the poet. But De Quincey was too timid to approach Wordsworth directly, and so he made his way to Chester, where his mother dwelt, in the hope of seeing a sister; he was caught by the older members of the family, but, through the efforts of his uncle, Colonel Penson, received the promise of a guinea a week to carry out his later project of a solitary tramp through Wales. From July to November, 1802, De Quincey lived as a wayfarer. He soon lost his guinea by ceasing to keep his family informed of his whereabouts, and had difficulty making ends meet. Still apparently fearing pursuit, he borrowed some money and travelled to London, where he tried to borrow more. Failing that, he lived close to starvation rather than return to his family.

Discovered by chance by his friends, De Quincey was brought home and finally allowed (1803) to go to Worcester College, Oxford, on a reduced income. Here, "he came to be looked upon as a strange being who associated with no one." During this time he began to take opium. He left, apparently about 1807, without a degree. In the same year, he made the acquaintance of Samuel Taylor Coleridge and William Wordsworth, having already sought out Charles Lamb in London. His acquaintance with Wordsworth led to his settling in 1809 at Grasmere, in the beautiful English Lake District; his home for 10 years was Dove Cottage, which Wordsworth had occupied and which is now a popular tourist attraction. De Quincey was married in 1816, but soon after, having no money left, he took up literary work in earnest.

In 1821, he went to London to dispose of some translations from German authors, but was persuaded first to write and publish an account of his opium experiences, which that year appeared in the London Magazine. This new sensation eclipsed Lamb's Essays of Elia, which were then appearing in the same periodical. The Confessions of an English Opium-Eater were soon published in book form. De Quincey then made literary acquaintances. Tom Hood found the shrinking author "at home in a German ocean of literature, in a storm, flooding all the floor, the tables, and the chairs—billows of books." Richard Woodhouse speaks of the "depth and reality of his knowledge...His conversation appeared like the elaboration of a mine of results...Taylor led him into political economy, and the study of classics."

From this time on, De Quincey maintained himself by contributing to various magazines. He soon exchanged London and the Lakes for Edinburgh and its suburb, Lasswade, where he spent the remainder of his life. Blackwood's Edinburgh Magazine and its rival Tait's Magazine received a large number of his contributions. The English Mail-Coach appeared in 1849 in Blackwood. Joan of Arc had already been published (1847) in Tait. De Quincey throughout his life drank laudanum—after 1821, twice in great excess. During his last years, he nearly completed a collected edition of his works.

His immediate influence extended to Edgar Allan Poe, Fitz Hugh Ludlow, and Charles Baudelaire, but even major twentieth-century writers such as Jorge Luis Borges admired and claimed to be partly influenced by his work. Hector Berlioz also loosely based his Symphonie Fantastique on Confessions of an English Opium Eater, drawing on the theme of the internal struggle with one's self.

Wikisource has original works written by or about:
Thomas De Quincey

Retrieved from https://www.newworldencyclopedia.org/p/index.php?title=Thomas_De_Quincey&oldid=1032719
Categories:
Hidden category:
This page was last edited on 21 February 2020, at 01:43.
Content is available under Creative Commons Attribution/Share-Alike License; additional terms may apply. See Terms of Use for details.