Stegosaur is the common name for any of the various extinct, plated tetrapods (four-legged vertebrates) comprising the taxonomic group Stegosauria, a suborder, or infraorder, of herbivorous dinosaurs of the Jurassic and Early Cretaceous periods. Stegosaurs are characterized by a double row of bony plates or spikes along the back, hind legs much longer than the front legs, a short neck, and a relatively small head. The genus Stegosaurus, from which the group acquires its name, is by far the most famous stegosaurian.

Although extinct for more than one hundred and forty million years, stegosaurs, with their large size and unique form, have fascinated human beings since first discovered by O. C. Marsh in 1877. These dinosaurs also reflect upon the changing history of life, with new forms arising on the foundation of earlier forms.

Fossils of stegosaurs have been found mostly in the Northern Hemisphere, predominantly in what is now North America and China, but also in Africa and Europe. They trace to about 165 to 144 million years ago.

All stegosaurs have rows of special bones, called osteoderms, which develop into plates and spikes along the back and tail. Many also have intermediate ones, called "splates."

The arrangement of the plates differ with the taxonomic group. In Stegosaurus, the plates are asymmetrical and project upward in two alternating rows on either side of the backbone, and there are pairs of body spikes on the tail. In Kentrosaurus, the dorsal plates are more symmetrical and are relatively small, and located only on the front half of the spine, along its neck and shoulders. Along the rest of the back and down the tail were several—typically six—spectacular pairs of imposing caudal spikes, each up to a foot in length.

Steogsaurs had characteristic long, narrow heads and a horn-covered beak, or rhamphotheca, which covered the front of the upper jaw (premaxillary) and lower jaw (predentary) bones. Similar structures are seen in turtles and birds. Apart from Huayangosaurus, stegosaurs lack nearby premaxillary teeth (Sereno and Dong 1992).

All stegosaurs are four-legged, with hoof-like toes on all four limbs. All stegosaurians after Huayangosaurus had forelimbs much shorter than their hindlimbs. Given that their speed would have been limited by their shortest limb and their size is likely to have precluded them from being bipedal, this suggests that they were not able to run quickly.

Stegosauria is often considered as an infraorder with two families: Stegosauridae and Huayangosauridae. Stegosauria lies within the Thyreophora, or armored dinosaurs, a suborder that also includes the more diverse ankylosaurs. The stegosaurs were a clade of animals similar in appearance, posture, and shape, which mainly differed in their array of spikes and plates. 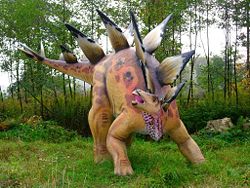 Stegosaurus is a well-known genus of Stegosauria, which lived during the late Jurassic period (Kimmeridgian to Early Tithonian) and was discovered by O. C. Marsh during the Bone Wars. Due to its distinctive tail spikes and plates, Stegosaurus is one of the most recognizable dinosaurs, along with Tyrannosaurus, Triceratops, and Apatosaurus.

Initial specimens were found in western North America. At least three species have been identified in the upper Morrison Formation of the western United States and are known from the remains of about 80 individuals. They lived some 155 to 145 million years ago, in an environment and time dominated by the giant sauropods Diplodocus, Camarasaurus, and Apatosaurus. In 2006, a specimen of Stegosaurus was announced which was found in Portugal, suggesting that they were present in Europe as well (Escaso et al. 2007).

A large, heavily-built, and herbivorous quadruped, Stegosaurus had a distinctive and unusual posture, with a heavily-arched back, short forelimbs, head held low to the ground, and a stiffened tail held high in the air.

Stegosaurus was the largest of all the stegosaurians (bigger than genera such as Kentrosaurus and Huayangosaurus) and, although roughly bus-sized, it nonetheless shared many anatomical features (including the tail spines and plates) with the other stegosaurian genera.

Averaging around 9 meters (30 feet) long and 4 meters (14 feet) tall, the quadrupedal Stegosaurus is one of the most easily-identifiable dinosaurs, due to the distinctive double row of kite-shaped plates rising vertically along its arched back and the two pairs of long spikes extending horizontally near the end of its tail. Although a large-bodied animal, it was dwarfed by its contemporaries, the giant sauropods. Some form of armor appears to have been necessary, as it coexisted with large, predatory, theropod dinosaurs, such as the fearsome Allosaurus and Ceratosaurus.

The hind feet each had three short toes, while each forefoot had five toes; only the inner two toes had a blunt hoof. All four limbs were supported by pads behind the toes (Lambert 1993). The forelimbs were much shorter than the stocky hindlimbs, which resulted in an unusual posture. The tail appears to have been held well clear of the ground, while the head of Stegosaurus was positioned relatively low, probably no higher than 1 meter (3.3 feet) above the ground (Carpenter 1998).

The long and narrow skull was small in proportion to the body. It had a small antorbital fenestra, the hole between the nose and eye common to most archosaurs, including modern birds, though lost in extant crocodilians. The skull's low position suggests that Stegosaurus may have been a browser of low-growing vegetation. This interpretation is supported by the absence of front teeth and their replacement by a horny beak, or rhamphotheca. Stegosaurian teeth were small, triangular, and flat. The inset placement in the jaws suggests that Stegosaurus had cheeks to keep food in their mouths while they chewed (Fastovsky and Weishmapel 2005).

Despite the animal's overall size, the braincase of Stegosaurus was small, being no larger than that of a dog. A well preserved Stegosaurus braincase allowed Othniel Charles Marsh to obtain, in the 1880s, a cast of the brain cavity, or endocast of the animal, which gave an indication of the brain size. The endocast showed that the brain was indeed very small, maybe the smallest among the dinosaurs. The fact that an animal weighing over 4.5 metric tons (5 U.S. short tons) could have a brain of no more than 80 grams (2.8 oz) contributed to the popular idea that dinosaurs were extremely stupid, an idea now largely rejected (Bakker 1986).

Stegosaurus was the first-named genus of the family Stegosauridae. It is the type genus that gives its name to the family.

Stegosaurus, one of the many dinosaurs first collected and described in the Bone Wars, was originally named by Othniel Charles Marsh in 1877 (Marsh 1877), from remains recovered north of Morrison, Colorado. These first bones became the holotype of Stegosaurus armatus. The basis for its scientific name, "roof(ed) lizard" has been thought to have been Marsh's initial belief that the plates lay flat over the animal's back, overlapping like the shingles (tiles) on a roof. A wealth of Stegosaurus material was recovered over the next few years and Marsh published several papers on the genus. Initially, several species were described. However, many of these have since been considered to be invalid or synonymous with existing species (Carpenter and Falton 2001), leaving two well-known and one poorly-known species.

The array of plates on the back of Stegosaurus has been the subject of much speculation. The plates have been proposed as a defensive mechanism, as well as having display and thermoregulatory (heat control) functions.

The fact that the plates are bony structures, complete with blood vessels, suggests to some that the plates served in heat exchange, radiating heat on hot days and absorbing warmth on cool days (Mayell 2005). However, this view also is criticized because the closest relatives did not have large plates up and down the back, but rather spikes.

Likewise, the speculation that the plates were involved in defense is criticized on the basis of their being relatively ineffective, since they are relatively fragile and grow only on the back, vertically, leaving the sides of the animal exposed.

The speculation that they were a sexual display is considered unlikely, since they were found in both males and females.

There is further speculation that the plates simply served as a type of species identification, allowing members of a species to recognize each other (Mayell 2005).

The Stegosauria were originally named as an order within Reptilia by O.C. Marsh in 1877 (Marsh 1877), although today it is generally treated as an infraorder or suborder (or simply a clade) within Thyreophora, the armored dinosaurs. It includes the families Huayangosauridae and Stegosauridae.

The Huayangosauridae were an early family of stegosaurs that lived during the early to middle Jurassic Period. In general, they were smaller than later stegosaurs and had shorter and higher skulls. Currently, the only confirmed genus included is the type genus Huayangosaurus of China. The poorly-known remains of Regnosaurus from England, however, indicate it too could be a member. Its lower jaw is very similar to the former.

The vast majority of Stegosaurian dinosaurs thus far recovered belong to the Stegosauridae, which lived in the later part of the Jurassic and early Cretaceous, with one possible genus (Dravidosaurus) from the late Cretaceous. Stegosauridae includes the well-known Stegosaurus. The family is widespread, with members across the Northern Hemisphere and Africa. 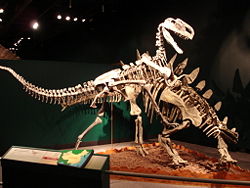 A fossil melee involving a stegosaurian (Tuojiangosaurus) and a mid-sized theropod (Monolophosaurus), Field Museum in Chicago

Following is a list of stegosaurian genera by classification and location:

Kenneth Carpenter of the Denver Museum of Nature and Science published a preliminary phyletic tree (Carpenter et al. 2001) of stegosaurs, in the 2001 description of Hesperosaurus. Here, the basal stegosaur, Huayangosaurus, is used as the outgroup. The Stegosauridae are then defined as all stegosaurs closer to Stegosaurus than to Huayangosaurus. The position of Chungkingosaurus is uncertain due to lack of data.

Retrieved from https://www.newworldencyclopedia.org/p/index.php?title=Stegosaur&oldid=1083171
Categories:
Hidden category:
This page was last edited on 21 October 2022, at 17:18.
Content is available under Creative Commons Attribution/Share-Alike License; additional terms may apply. See Terms of Use for details.