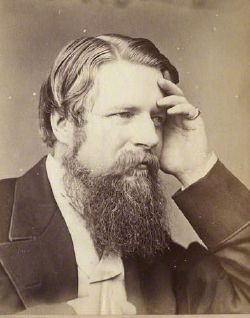 The Rt. Hon. The Earl of Iddesleigh

Stafford Henry Northcote, 1st Earl of Iddesleigh 1818-1887, was a British statesman who served under two of Britain's most influential Victorian-era leaders, William Ewart Gladstone and Benjamin Disraeli. Northcote rose from being Gladstone's secretary, to become the Chancellor of the Exchequer in the Disraeli government, to the Leader of the House of Commons, eventually joining the House of Lords, where he became the Foreign Secretary under Prime Minister Lord Sailsbury. If not for his mild and shy personality, many believe Northcote could have become Prime Minister in 1886.

He was known as one of Britain's kindest politicians, owing much to his deep religious faith. As a young Oxford-educated man, he desired unity in the Church of England and believed God was bringing a purification in the Church. For a period of time, he was associated with a Messianic religious sect, the Catholic Apostolic Church, that attracted a number of notable Victorians, including the banker Henry Drummond. Northcote is best remembered for being a modernizer in his day for his work on reforming the Civil Service.

Northcote was born in London on October 27, 1818, at 23 Portland Place, the eldest son of Sir Stafford Northcote. His mother was Agnes Cockburn of the famed family of Cockburn of Henderland. His ancestors had long been settled in Devon, tracing their descent from Galfridas de Nordcote who settled there in 1103. After an early education in Brighton, Northcote attended Eton and went on to Balliol College at Oxford University where he earned a first in classics in 1839 and excelled in poetry. A year later, on Easter Day, his mother died.

"Seldom has a modern man of so much intellect been so utterly unvexed by speculative doubt and anxieties," wrote his official biographer, Andrew Lang, concerning Northcote's college days. "This freedom was part of his greatest gift, the gift of happiness."

After a successful career at Oxford, he studied law at Lincoln Inn Fields. In 1843 he became the principal private secretary to William Ewart Gladstone, then a member of the Conservative Party and president of the Board of Trade. Gladstone resigned from the party over the issue of Ireland in 1845. While he would later face his former mentor on the opposite side of the House of Commons, Northcote remained an executor of Gladstone's will. Northcote became the legal secretary to the Board of Trade and co-operated with Sir Charles Trevelyan in framing the report which revolutionized the conditions of appointment to the Civil Service, for which he would long be remembered. He recommended a system of examination to be employed for entrants into the Civil Service in order to limit the growth of the government. In 1850 he met Prince Albert and was asked to become involved in the organization of the Great Exhibition of 1851, where he worked on the French and Belgium sections. In 1851 both his father and his grandfather died and he succeeded his grandfather, Sir Stafford Henry Northcote, as 8th baronet in 1851.

Northcote entered Parliament in 1855 as Conservative Member of Parliament for Dudley, and was elected for Stamford in 1858, a seat which he exchanged in 1866 for North Devon. He was the president of the Hudson's Bay Company in 1870, when they gave the Northwest Territories to Canada, and one of the commissioners for the settlement of the Alabama difficulty at the Treaty of Washington with the United States in 1871. While in America he chalked up a 5,000 pound (British sterling) telegram bill. Steadily supporting his party, he became President of the Board of Trade in 1866, Secretary of State for India in 1867, and then, the Chancellor of the Exchequer in 1874 in Prime Minister Benjamin Disraeli's newly elected government. As the finance minister he was largely dominated by the lines of policy laid down by Gladstone; but he distinguished himself by his dealings with the national debt, especially his introduction of the New Sinking fund in 1876, by which he fixed the annual charge for the debt in such a way as to provide for a regular series of payments off the capital. As Chancellor of the Exchequer, Northcote lived at No. 10 Downing Street, normally the prestigious address of the sitting Prime Minister. Because Northcote had ten children and the Disraeli was a childless widower, the two men agreed to swap residences. The Prime Minister moved into the smaller flat at No. 11, while Northcote and his large brood, settled into the more spacious No. 10, where as Disraeli explained, "the drains are so much better." One of Northcote's grandchildren, Dame Flora MacLeod, was born in the house on February 3, 1878. It wasn't until another 122 years later that another child would be born at 10 Downing Street—Leo Blair, the son of Prime Minister Tony Blair and his wife Claire.

Leader of The Conservative Party

On Disraeli's elevation to the House of Lords as Earl of Beaconsfield in 1876, Northcote became leader of the Conservative Party in the House of Commons. He was considered by some a weak leader because of his shy and gentle nature—"a sheep in sheep's clothing," wrote Roy Jenkins in his biography of Gladstone. To satisfy the more radical members in his party, notably Lord Randolph Churchill (father of Winston Churchill), Northcote was forced out of the House of Commons and "elevated" to the Lords in 1885, when Lord Salisbury became Prime Minister. It was a blow to Northcote, for the House of Commons had been his home for 30 years.

In the House of Lords he took two titles—Earl of Iddesleigh, a name derived from his family estate in Devon, and Viscount St. Cyres—and was included in the cabinet as First Lord of the Treasury. In Lord Salisbury's 1886 ministry he became Foreign Secretary, but the arrangement was not a comfortable one, and he resigned in December of 1886. On January 12, 1887 he died very suddenly at Lord Salisbury's residence in Downing Street.

Northcote was elected lord rector of the University of Edinburgh in 1883, in which capacity he addressed the students on the subject of "Desultory Reading." He was not a prolific or notable writer, but among his works were Twenty Years of Financial Policy (1862), a valuable study of Gladstonian finance, and Lectures and Essays (1887). His biography by Andrew Lang appeared in 1890.

In 1843, Lord Iddesleigh had married Cecilia Frances Farrer (d. 1910), sister of Thomas, 1st Lord Farrer, by whom he had seven sons and three daughters. His second son, Henry Northcote, was Governor-General of Australia 1904–1908.

Northcote helped set up and fund the Brampford Reformatory for Boys in 1855 on land he provided near his home. He often visited the boys and found jobs for them. He opposed slavery in America but called on Britain to remain neutral in the Civil War. A statue of Northcote stands in the Central Lobby of the Palace of Westminster.

Northcote inherited the spirit of religion from his mother and grew up to have strong religious opinions. For a period of time—April-October 1836—he stayed at the Shirley Vicarage in Derby where he studied the Bible and the classics. He desired unity in the Church of England and felt that God was bringing a purification to the church. He believed the church, as the "bride of Christ," was not ready for the Second Coming. The role of the church, he noted, included the "obligation to spread the Gospel throughout the world."

While at college, these ideas led him to join Newman Street Congregation, which followed the teachings of the controversial evangelist Edwin Irving. Irving was unfrocked by the Presbyterian Church for his charismatic outbursts. Irving was later consecrated as an "Angel" in the Catholic Apostolic faith, which built a huge church, known as the Church of Christ at Gordon Square in London. The Catholic Apostolic Church, believed in the nearness of the Second Coming of Christ and prepared itself as a "bride" for the returning Messiah. The church recruited established men in society to take on the role of Christ's new disciples. It was open to new prophecies and the practice of speaking in tongues. In the basement of the Church of Christ, known as London's "third cathedral," the group prepared splendid robes and capes for the coming Messiah and his disciples.

The Newman Street Church was not liked by the establishment, especially Northcote's father and future in-laws when he was to marry. As a result, Northcote was forced to sever his ties with the sect in order to marry.

There is oral evidence that suggests that Northcote sired an illegitimate daughter in London and raised this girl on his estate 180 miles away from London, in the Exeter area in the county of Devon.

In 1877 a seamstress named Martha Andrews gave birth to Ada Andrews at London's notorious Marylebone Workhouse with no father listed on the birth certificate. Life expectancy, for a girl raised in poverty in London was just 17 years. However, this baby was brought to Northcote's ancestral village of Upton Pyne, and according to her marriage certificate, she was adopted by the local thatcher John Bradford who worked on the Northcote estate. This was 1877, long before today's modern adoption agencies. Interestingly, Northcote's biographer called 1877 a "quiet year." It was common in those days for bastard children sired by the wealthy to be sent down to the country estates where they would be raised in ignominy. Ada Andrews, worked in the Northcote house, eventually becoming the personal maid to Northcotes's wife Cecilia Frances Farrer, who died in 1910. A deeply religious woman, who named her sons, Matthew, Mark, Luke and John, Ada revealed the secret of her real father just before she died giving birth to her last son. She was indebted to Northcote, for he had saved her from a life of poverty in bringing her to his country estate overlooking the River Exe in Devon.

Northcote's death came in a dramatic manner. On January 1887, Northcote visited the Foreign Office to talk with the great explorer Henry Morton Stanley about his expedition to relieve the German explorer Emin Bey in the Sudan. He then walked across to Number Ten Downing Street to talk to the Prime Minister Lord Salisbury. On reaching the anteroom at Number Ten, he sank into a chair and died in the presence of the Prime Minister.

His funeral took place at Upton on Pynes, and services took place at Exeter Cathedral, Westminister Abbey, and also at St. Giles Cathedral in Edinburgh.

In its obituary the Times of London wrote that Northcote was "the man of perfect courtesy of soul, the man who by word, deed and conduct always strove to make others content with themselves and with him." Queen Victoria mentioned Northcote's death in her personal dairy: “He fainted at the top of the stairs at Downing Street,” she wrote, “and he died in twenty minutes. I felt quite bewildered and stunned.”

Northcote's life was summed up succinctly by his biographer: "He was tolerant, candid, no seeker of his own interest, ambitious only in the lines of duty and rectitude. The age for which he was fitted ended when he died, but he did not live to see the new tumult at its worst."

Retrieved from https://www.newworldencyclopedia.org/p/index.php?title=Stafford_Northcote&oldid=1082304
Categories:
Hidden category:
This page was last edited on 14 October 2022, at 18:37.
Content is available under Creative Commons Attribution/Share-Alike License; additional terms may apply. See Terms of Use for details.