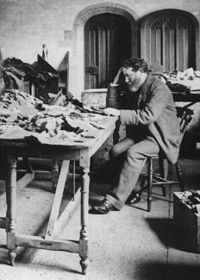 Solomon Schechter (December 7, 1847 - November 19, 1915) was a Romanian born English and American rabbi, scholar, and educator, most famous for his roles as the founder of Conservative Judaism and president of the Jewish Theological Seminary of America.

Schechter came to England as a tutor of the future leader of Progressive Judaism, Claude Montefiore, and won fame for his discoveries of important medieval Jewish manuscripts at the Cairo Geniza in 1896. He served in several prestigious academic posts in England before becoming the president of the Jewish Theological Seminary (JTS) in New York City in 1902, rescuing it from near collapse and developing it into a effective training ground for the future intellectual and spiritual leaders of Conservative Judaism.

Schecter soon became the leading voice of the emerging Conservative movement within American Judaism as a middle ground between the staunch traditionalism of Orthodoxy and the liberalism of the Reform movement. He was an early supporter of Zionism, as well as a major contributor to the Jewish Encyclopedia. In 1913, shortly after retiring from his post at JTS, Schechter formed the United Synagogue of America, later renamed as the United Synagogue of Conservative Judaism, which became for many decades the largest Jewish denomination in the US. He died in 1915.

Schechter was born in Focşani, Romania to a Jewish family adhering to the Chabad branch of Hasidic Judaism. He received his early education from his father, who was a shochet (ritual slaughterer). He is said to have learned to read Hebrew by age three, and by five mastered the Torah. He went to a yeshiva in Piatra Neamţ, eastern Romania at age ten and at 13 studied with one of the major Talmudic scholars, Rabbi Joseph Saul Nathanson of Lemberg in today's Ukraine. 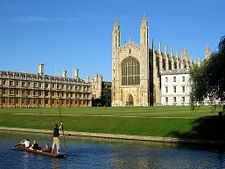 In his twenties Schechter went to the rabbinical college in Vienna, where he studied under the modern Talmudic scholars Meir Friedmann and Isaac Hirsch Weiss. He also attended lectures on philosophy and other secular branches of learning in the University of Vienna. After receiving his rabbinical diploma, he moved to Berlin in 1879 to undertake further studies at the Higher Institute for Jewish Studies and the [[University of Berlin]. Three years later he was invited to London to serve as the tutor of rabbinics to Claude Montefiore, the future founder of Liberal Judaism.

In 1885, Schechter's essay "The Study of the Talmud" appeared in the Westminster Review. In 1887 he published his important edition and introduction to Avot de-Rabbi Nathan, the first and longest of the "minor tractates" of the Talmud. He went on to write various essays and lectures in the Jewish Chronicle, Jewish Quarterly Review, Revue des Etudes Juives, and Monatsschrift. Some of these lectures and essays were later collected and published under the title Studies in Judaism (1896). In 1890, Schechter was elected lecturer in Talmud at the University of Cambridge, and in 1891 he received the honorary degree of M.A.

In 1892 Schechter was elected reader in rabbinics at Cambridge, and in the following year he obtained a grant to travel to Italy to examine the Hebrew manuscripts in the great Italian libraries. In 1894 he delivered a series of theological lectures in University Hall, London, and the following year he was appointed the first Gratz lecturer in Philadelphia. A series of his lectures were afterward published in Jewish Quarterly Review as "Some Aspects of Rabbinic Theology."

A page of the Jerusalem Talmud from the Cairo Geniza

Schechter won his greatest academic fame from his exposition of the papers of the Cairo Geniza, a repository of old and unused Hebrew documents stored in a Ben Ezra Synagogue in Cairo. His work on this extraordinary collection of over 100,000 pages of rare Hebrew religious manuscripts and other medieval texts revolutionized the study of medieval Judaism.

Initially, in 1896, Schechter forwarded collection of Geniza documents unopened to the Bodleian Library at Oxford University. Later, two female Scottish researchers showed him some leaves from the collection that contained the Hebrew text of Ecclesiasticus, which had for centuries only been known in Greek and Latin translation. He quickly found support for a new expedition to Cairo, where he carefully selected for the University Library a trove three times the size of any other collection.

A string of prestigious academic appointments soon followed. In 1898 he was appointed external examiner in Victoria University, Manchester, England; in 1899, professor of Hebrew at University College, London; in 1900, curator of the Oriental Department of Cambridge University Library. He was also a member of the Board of Oriental Studies and the Board of Theological Studies, London University.

Schechter's later life would be intimately bound up with that of the emerging movement of Conservative Judaism in the United States. In 1883, tensions between the modern and traditional branches of American Judaism reached the breaking point with the Reform movement's adoption of a statement in 1885 which dismissed observance of the Jewish ritual commandments and characterized the idea of the Jews as God's chosen people as "anachronistic." 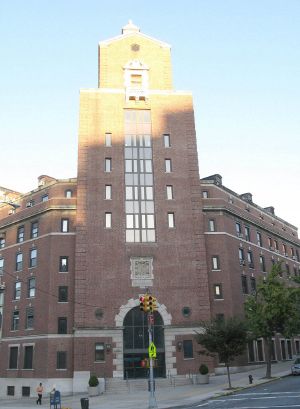 In 1886, the Jewish Theological Seminary (JTS) was founded in New York City as a modern but traditional alternative to the Reform movement's Hebrew Union College. However, the JTS was unwilling to accommodate the fundamentalism of Orthodox tradition, and at the turn of the century it lacked a source of permanent funding and was ordaining on average no more than one rabbi per year.

In late 1901, Schechter was offered the presidency of the faculty of the JTS. After his arrival in New York, was installed as president of the seminary and also served as editor of the Talmudic department of the Jewish Encyclopedia. In 1902 he published the Midrash Hag-Gadol from a Yemeni manuscript and the Saadyana—a major analysis of the work of Saadia Gaon—from manuscripts discovered in the Cairo Genizah. He also contributed articles on Judaism to various non-Jewish dictionaries, encyclopedias, and journals. In 1904 he was appointed an honorary member of the senate of New York University and a director of the Educational Alliance. In 1905, he was invited to deliver a course of lectures in Jewish theology at Harvard University. He later became the chairman of the committee that edited the Jewish Publication Society of America Version of the Hebrew Bible.

Schechter served as JTS president from 1902 to 1915. Under his leadership the seminary obtained a distinguished faculty and a dynamic momentum, training Conservative Judaism's future intellectual and spiritual leaders. Schechter also became the leading voice of Conservative Judaism himself, leading the movement's attempt to forge a middle path between the Orthodox and Reform traditions. He emphasized the continuing centrality of Jewish law (halakha) in Jewish life, while at the same time encouraging the critical study of Judaism's sacred texts and adopting a progressive attitude toward applying halakha in modern context. In his inaugural address as President of the Jewish Theological Seminary in 1902, he stated:

"Judaism is opposed to any number of things and says distinctly 'thou shalt not.' It permeates the whole of your life. It demands control over all of your actions, and interferes even with your menu. It sanctifies the seasons, and regulates your history, both in the past and in the future. Above all, it teaches that disobedience is the strength of sin. It insists upon the observance of both the spirit and of the letter; spirit without letter belongs to the species known to the mystics as 'nude souls,' nishmatim artilain, wandering about in the universe without balance and without consistency…. In a word, Judaism is absolutely incompatible with the abandonment of the Torah."

On the other hand, Schechter emphasized that the Talmud itself shows that Jewish law is formed and evolves in the context of the historical situation, based on national consensus. The Judaism of ancient Israel was thus significantly different from that of the Second Temple period, which in turn differed from the Rabbinical Judaism of the period immediately after the destruction of the Temple in 70 C.E. and from medieval Judaism, etc. Though criticized for taking a non-traditional viewpoint, Schechter argued that the rabbis had always developed new and appropriate interpretations and applications of Jewish law as circumstances dictated. Indeed, the Oral Law should not be viewed as static but fluid, adjusting the changing situation of God's people without compromising basic principles.

In 1913 Schechter founded the United Synagogue of America as a body of Conservative Jewish synagogues with 23 congregations. It later grew to more than 800 congregations and became the largest Jewish denomination in the world. Schechter was also an early advocate of Zionism. He died in 1915. A conservative synagogue in Seattle, Washington

Schechter's name is closely associated with three major fields in the life of modern Judaism: the discoveries of the Cairo Geniza, the success of the Jewish Theological Seminary, and the tradition of Conservative Judaism. His findings at the Cairo Geniza created a major interest in the collection and study of medieval Jewish documents. He placed the JTS on an institutional footing strong enough to endure for over a century. Finally, he became the foremost personality of Conservative Judaism and is regarded as its founder. A network of Conservative Jewish day schools is named in his honor. There are several dozen Solomon Schechter Day Schools across the United States and Canada.

Schechter's chief scholarly works were his publication of the The Wisdom of Ben Sira (with C. Taylor, 1899), portions of the Hebrew version of the apocryphal Book of Ecclesiasticus; the Saadyana (1903), and the Documents of Jewish Sectaries (1910), dealing with a first-century sect. Fragments of the latter text were discovered among the Dead Sea Scrolls, confirming his thesis that the medieval copies he had discovered were of ancient origin.

Schechter himself considered the [United Synagogue of America]] to be his greatest legacy, believing in the need for a strong congregational base for the movement of Conservative Judaism. Through much of the twentieth century, the Conservative movement was the largest Jewish denomination in the United States, losing that status only recently to Reform Judaism.