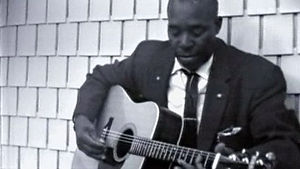 Nehemiah Curtis "Skip" James (June 21, 1902 – October 3, 1969) was an American blues singer, guitarist, pianist, and songwriter. Born near Bentonia, Mississippi, he developed a unique singing and guitar playing style, featuring his high-pitched voice and virtuoso finger-picking technique. Few could imitate James' eerie vocalizations and adept playing, one of them being the young Robert Johnson, who went on to become legendary.

James recorded for Paramount Records in 1931, but, like several other bluesmen of his era, he dropped out of the music business for 30 years until his rediscovery in the early 1960s. He burst onto the blues-revival scene at the Newport Folk Festival in 1964 and became a popular performer at folk venues until his death in 1969. The rock group Cream covered his song "I'm So Glad" in the late 1960s, providing him with his one hit record.

James was known to be an aloof and idiosyncratic artist. Though the lyrical content of some of his songs led some to the characterization of him as a misogynist, he remained with his wife Lorenzo until his death. He seldom socialized with other bluesmen or fans and reportedly disliked the folk scene of the 1960s. James epitomized the complicated personality typical of many bluesmen, living a hard and sometimes reckless life while holding austere religious beliefs. His work remains more popular and influential today than in either of his two brief recording careers.

James was born near Bentonia, Mississippi. His father was a converted bootlegger turned preacher. As a youth, James heard local musicians such as Henry Stuckey and brothers Charlie and Jesse Sims and began playing the organ in his teens. He worked on road construction and levee-building crews in his native Mississippi in the early 1920s, and wrote what is perhaps his earliest song, "Illinois Blues," about his experiences as a laborer. Later, he sharecropped and made bootleg whiskey in the Bentonia area. He began playing guitar in open D-minor tuning and developed a three-finger picking technique that he would use to great effect on his recordings. In addition, he began to practice piano-playing, drawing inspiration from the Mississippi blues pianist Little Brother Montgomery.

In early 1931, James auditioned for Jackson, Mississippi record shop owner and talent scout H. C. Speir, who placed blues performers with a variety of record labels, including Paramount Records. On the strength of this audition, James traveled to Grafton, Wisconsin to record for Paramount. James' 1931 work is considered unique among pre-war blues recordings, and forms the basis of his reputation as a musician.

As is typical of his era, James recorded a variety of material: blues and spirituals, cover versions and original compositions, frequently blurring the lines between genres and sources. For example, "I'm So Glad" was derived from a 1927 song by Art Sizemore and George A. Little entitled "So Tired," which had been recorded in 1928 by both Gene Austin and Lonnie Johnson (the latter under the title "I'm So Tired of Livin' All Alone"). James changed the song's lyrics and transformed it with his virtuoso technique, moaning delivery, and keen sense of tone. Biographer Stephen Calt considered the finished product to be "one of the most extraordinary examples of fingerpicking found in guitar music." In the 1960s, "I'm So Glad" became a hit record for the rock group Cream, featuring Eric Clapton on guitar.

Several of the Paramount recordings, such as "Hard Time Killing Floor Blues," "Devil Got My Woman," "Jesus Is A Mighty Good Leader," and "22-20 Blues" (the basis for Robert Johnson's better-known "32-20 Blues"), have proven similarly influential. Very few original copies of James' Paramount 78s have survived.

The Great Depression struck just as James' recordings were hitting the market. Sales were poor as a result, and James gave up performing the blues to become the choir director in his father's church. James himself was later ordained as a minister in both the Baptist and Methodist denominations, but his involvement in religious activities was inconsistent.

Like several other early bluesmen, James recorded nothing for the next 30 years and drifted in and out of music. He was virtually unknown to listeners until about 1960. In 1964, however, blues enthusiasts John Fahey, Bill Barth, and Henry Vestine found him in a Tunica, Mississippi hospital. According to Calt, the "rediscovery" of both Skip James and Son House at virtually the same moment was the start of the "blues revival" in America. In July 1964, James, along with other rediscovered performers, appeared at the Newport Folk Festival. Throughout the remainder of the decade, he recorded for the Takoma, Melodeon, and Vanguard labels and played various engagements until his death in 1969.

Skip James' sound was unique to the blues genre and although he influenced other blues musicians, such as Robert Johnson, few have been able to recreate his style. His high pitched voice seems otherworldly and frail, even in his early recordings. He is said to have had a "preaching" style of singing and was known to also sing spirituals.

James is regarded as a gifted and distinctive guitarist. He often used an open D-minor tuning (D-A-D-F-A-D) which gave his instrument a dark and desolate tone. James reportedly learned this tuning from his musical mentor, the unrecorded bluesmen Henry Stucky. Stuckey in turn was said to have acquired it from Bahamanian soldiers during the first world war. The famed Robert Johnson also recorded in this "Bentonia" tuning, his "Hell Hound on my Trail" being based on the James' "Devil got my woman." James' finger-picking style features an economical grace in its technique, resembled classical guitar technique. It was fast and clean, using the entire register of the guitar with heavy, hypnotic bass lines. James' style of playing is considered to have shared as much in common with the Piedmont blues of the East Coast as the Delta blues of his native Mississippi.

Although not initially covered as frequently as other rediscovered musicians, British rock band Cream recorded two versions of "I'm So Glad" (a studio version and a live version), providing James the only financial windfall of his career. Cream based their version on James' simplified 1960s recording, instead of the faster, more intricate 1931 original.

Since his death, James' music has become more available and prevalent than during his lifetime. His 1931 recordings, along with several rediscovered recordings and concerts, have found their way on to numerous compact discs, drifting in and out of print. His influence is still felt among contemporary bluesmen, as well as more mainstream performers such as Beck, who sings a partially-secularized, Skip James-inspired version of "Jesus Is A Mighty Good Leader" on his 1994 "anti-folk" record, One Foot in the Grave.

James also left a mark on twenty-first century Hollywood, with Chris Thomas King's cover of "Hard Time Killing Floor Blues" in O Brother, Where Art Thou? and the 1931 "Devil Got My Woman Blues" featured prominently in the plot and soundtrack of Ghost World. In recent times, British post-rock band Hope of the States released a song partially focused on the life of Skip James entitled "Nehemiah," which charted at number 30 in the UK charts.

Paramount 78s: 1931 Of the speculated 26 Skip James recordings waxed in 1931, only 18 sides have survived. Although several compilations of these have since been released, all come from the same sources and share identical hisses, pops, and vocal distortion. Competing reissues of these differ primarily in track order and the presence or absence of various noise-cancellation efforts.

Rediscovery: 1964-1969 Despite poor health, James recorded several LPs of music, mostly revisiting his 1931 sides, traditional music, and spirituals; but along with these, he sang a handful of newly-penned blues, meditating on his illness and convalescence. Unfortunately, these five prolific years have not been thoroughly documented: recordings, outtakes, and interviews not released on James' few proper LPs (which, themselves, have been endlessly cannibalized and reissued) are scattered among many small label compilations. Previously unreleased performances continue to be found, released, and left largely unexplained—sometimes hours' worth at a time.