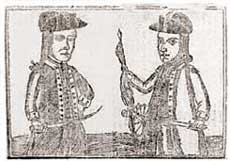 Daniel Shays, left, and Job Shattuck, shown in this engraving from Bickerstaff's Boston Almanack for 1787, led debt-ridden farmers against the Massachusetts state government. The rebellion dramatized the need for stronger central government.

Shays' rebellion was an armed uprising in western Massachusetts from 1786 to 1787. The rebels, led by Daniel Shays and known as Shaysites (or Regulators), were mostly small farmers angered by crushing debt and taxes. Failure to repay such debts often resulted in imprisonment in debtor's prisons or the claiming of property by the state. The rebellion started on August 29, 1786. A Massachusetts militia that had been raised as a private army defeated the main Shaysite force on February 3, 1787. There was a lack of an institutional response to the uprising, which energized calls to reevaluate the Articles of Confederation and gave strong impetus to the Constitutional Convention, which began in May 1787.

The United States may be unique as a nation because it was formed as a voluntary association based on declared moral principles. The fact that rebellion against the British had been sparked by unjust taxation was enough for citizens of the new state to expect not to be over-taxed. At bottom, the rebellion was about what type of society America was going to be and how its governance would be organized. It highlighted at an early stage two important issues—the relationship in a confederacy between central government and state government, and the influence of vested interests. The first issue would be one of the major contributors to the American Civil War while the second issue remains unresolved. Positively, the rebellion contributed to the writing of the United States Constitution, which did create a stronger central government, which makes it easier to ensure equity between citizens of the different states.

The rebellion was led by Daniel Shays, a veteran of the American Revolutionary War. The war's debt ultimately trickled down to individuals, in large part to small farmers. In addition, the tax system at the time—a direct capitation (poll tax)—was highly regressive, especially given the fact that there was a dichotomy in eighteenth century Massachusetts economy. Much of the western and central parts of the Commonwealth had a barter economy, as opposed to the monetary economy that existed in the eastern part of the Commonwealth. Compounding the east–west dichotomy was the fact that certain mature western and central Massachusetts towns (such as Northampton or Hadley) possessed more developed monetary economies, whereas other towns (such as Amherst or Pelham) subsisted on a barter economy. As a result, to meet their debts, many small farmers were forced to sell their land, often at less than one-third of fair market price to eastern Massachusetts speculators. Loss of such property could reduce families to extreme poverty. It also often meant that such men might lose their right to vote since suffrage was often tied to property ownership.

Furthermore, Massachusetts rewrote credit schemes at the time to be administered by elected rather than appointed officials. These efforts were resisted and obstructed by wealthy and influential parties, led by men like Governor James Bowdoin. Governor Bowdoin had strong control of the government. Because of the property eligibility requirements for office at the time, when Bowdoin was elected governor many of the people in western Massachusetts were outraged by what they perceived as injustice after they had fought so hard to help win their right to freedom during the American Revolutionary War.[1]

[T]he nationalists took advantage of a propitious rebellion, that of Daniel Shays, a former Continental Army officer. Shays and other local leaders led an uprising of distressed farmers from western Massachusetts groaning under the load of heavy taxes assessed to pay the interest and principal (at face value in specie) of the state's wartime debt. During an economic depression, with farm prices low and foreign markets closed, the state government was taxing the farmers (payable in hard money only) to pay wealthy eastern creditors who had lent depreciated paper (accepted at full face value) to the state government for bonds during the war.

The farmers either could not or would not pay, and when they failed to do so, state judges were quick to confiscate their farms. The farmers organized into a militia and marched on the courts, which they closed. Seeing an opportunity, the nationalist leaders were quick to misrepresent the grievances and aims of the insurgents. They claimed that the Shaysites, and similar groups in other states, were radicals, inflationists, and levelers out to defraud their creditors and redistribute property, instead of being, what in truth they were, property-owning, anti-tax rebels who wanted to keep their farms.

Obviously, the nationalists wanted to scare the country into supporting a more vigorous government. George Washington was terrified. "We are fast verging toward anarchy and confusion," he wrote. His nationalist friends did their best to heighten his terror. Henry Knox wrote Washington of the Shaysites that "their creed is that the property of the United States" having been freed from British exactions "by the joint exertions of all, ought to be the common property of all." This was utterly false, but it did the trick. Washington agreed to be the presiding officer at the constitutional convention. Later, [James] Madison in Federalist No. 10 warned that without the strong arm of a vigorous central government, the states would be vulnerable to movements motivated by "a rage for paper money, for an abolition of debts, for an equal division of property" and for other "improper or wicked project[s]." The Massachusetts historian Mercy Otis Warren, a contemporary of these events, warned of "discontents artificially wrought up, by men who wished for a more strong and splendid government."[2]

The rebellion was closely watched by the nation's leaders, who were alarmed at what they saw as an effort to "level" the inequalities the new nation was experiencing in the aftermath of the Revolution. George Washington, for example, exchanged dozens of letters through the fall and early winter of 1786–87, and it can be argued that the alarm he felt at the rebellion in Massachusetts was a strong motivation to bring him from retirement and work for a stronger central government.[3] Most alarming for Washington and other early American elitists such as Samuel Adams and former general Henry Knox was the very real helplessness that the Confederation government had in the face of a rebellion that had nearly seized one of the few federal arsenals the country had. Adams was, in fact, so disturbed by the events of the rebellion that the once great advocate of revolution called for the deaths of the men rebelling against ostensibly similar oppression. He would state, "In monarchy the crime of treason may admit of being pardoned or lightly punished, but the man who dares rebel against the laws of republic ought to suffer death."

However, not all founding fathers felt that the rebellion was a bad thing. On November 13 1787, Thomas Jefferson wrote a letter to New York senator William S. Smith saying,

A little rebellion now and then is a good thing. … God forbid we should ever be twenty years without such a rebellion. The people cannot be all, and always, well informed. The part which is wrong will be discontented, in proportion to the importance of the facts they misconceive. If they remain quiet under such misconceptions, it is lethargy, the forerunner of death to the public liberty. …And what country can preserve its liberties, if its rulers are not warned from time to time, that this people preserve the spirit of resistance? Let them take arms. The remedy is to set them right as to the facts, pardon, and pacify them. What signify a few lives lost in a century or two? The tree of liberty must be refreshed from time to time, with the blood of patriots and tyrants. It is its natural manure.[4]

In the aftermath of the Newburgh Conspiracy in 1783, the high cost of a standing army, and the country's discomfort with a standing army, the Confederation Congress had nearly completely demobilized the army. In the face of the increasing unrest through the fall of 1786, Knox ordered an expansion of the Continental Army; by mid-January, he'd managed to recruit only 100 men.

Some of the nation's leaders had long been frustrated by the weakness of the Articles of Confederation. James Madison, for example, initiated several efforts to amend them, efforts that were blocked by small, but significant, minorities in Congress. Emboldened by his success in the Maryland-Virginia border dispute of 1784–5, Madison decided that decisions outside Congress were the only way for states to resolve their various commercial and other problems. Others within Congress worried that the government was too weak to turn back outside invasions, but the general sentiment against standing armies kept the power of the government small.

As an extension of the process of working out problems between the states, Madison and others decided to call for a gathering of the states in the fall of 1786. The Annapolis Convention held in Annapolis, Maryland, September 11 to September 14, 1786, initially earned the acceptance of eight of the states, but several, including Massachusetts, backed out, in part due to suspicion at Virginia's motives. In the end, only twelve delegates from five states (New Jersey, New York, Pennsylvania, Delaware, and Virginia) appeared. The Convention did not accomplish much other than to endorse delegate Alexander Hamilton's call for a new convention in Philadelphia to "render the constitution of the Federal Government adequate to the exigencies of the Union."[5]

The events of Shays' Rebellion over the coming months would strengthen the hands of those who wanted a stronger central government, and persuade many who had been undecided as to the need for such a radical change. One of the key figures, George Washington, who had long been cool to the idea of strong centralized government, was frightened by the events in Massachusetts. By January 1787, he decided to come out of retirement and to attend the convention being called for the coming May in Philadelphia. At the Constitutional Convention of 1787, a new, stronger government would be created under the United States Constitution.

Retrieved from https://www.newworldencyclopedia.org/p/index.php?title=Shays%27_Rebellion&oldid=1098189
Categories:
Hidden category:
This page was last edited on 27 January 2023, at 13:24.
Content is available under Creative Commons Attribution/Share-Alike License; additional terms may apply. See Terms of Use for details.