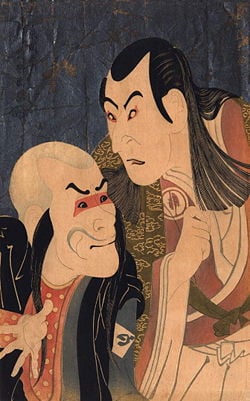 Toshusai Sharaku (17?? - 1801?) (Japanese: 東洲斎写楽) is widely considered to be one of the great masters of the Japanese woodblock print and one of art history’s most fascinating figures. Appearing on the Japanese art scene in the spring of 1794, he disappeared just as suddenly in early 1795 after creating nearly 150 prints of Kabuki actors. Many conjectures have been about the identity of this artist. Was he a Noh drama actor? Was he actually another artist, Utamaro, using a different name? Or was he someone completely different?

Sharaku left a large number of masterpieces, but the dates of his birth and death and details of his career are buried in obscurity. His realistic portraits were more complex psychologically than those of his contemporaries; he depicted not only the character played by an actor, but the feelings of the actor himself. It is thought that this style was not popular with a public which wanted idealized representations of actors, and that this may have been the reason for the brevity of his career. Sharaku’s work was not popular among his contemporaries, and he was fully recognized by the Japanese only after his work became highly regarded in the Western world.

Sharaku's first works were portraits of actors as they appeared on the stages of the three Kabuki theaters in Edo (Kawarazaki-za, Kiri-za and Miyako-za). His depictions have extraordinary power and the sense of reality and presence is very strong. The presumed number of Sharaku's works is about one hundred and forty, and his activity ended with portraits of actors in the February performance of 1795.

Sharaku’s first works were his finest, both in artistic value and in technical perfection as Ukiyo-e compositions. Rather than portraying actors as beautiful youths, however, Sharaku eagerly sought to capture their expressions at certain key moments. He was successful in achieving this, but alienated Ukiyo-e buyers who were most interested in beautiful countenances. Sharaku’s portraits captured the feeling and expression not only of the character being portrayed by an actor, but of the actor himself.

Until the practice was prohibited by the government, Sharaku used a mica ground with black sheen for his portraits. 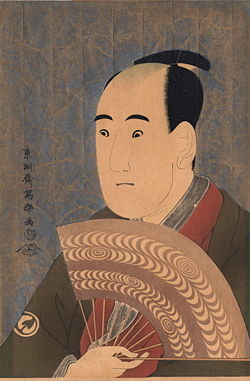 Sharaku left a large number of masterpieces, but the dates of his birth and death and details of his career are buried in obscurity. His identity remains a mystery. The most plausible theory says that he came from the Osaka area. In his 1844 update to the Zôho ukiyo-e ruikô ("Enlarged History of Floating World Prints") the historian Saitô Gesshin wrote that Sharaku's original name was Saitô Jûrôbei and that he lived in Hachôbori, Edo, while he was a visiting Noh actor in the troupe of the Lord of Awa. A Nôh actor named Saitô Jûrôbei is named in a later Nôh program from 1816, so we know that such an actor existed. Also, the Lord of Awa arrived in Edo on April 6, 1793, but was absent from April 21, 1794 through April 2,1796; if Sharaku was the Nô actor Jûrôbei and did not accompany his lord, he would have been free to explore printmaking during the period when Sharaku's prints appeared. Sharaku’s style is closer to the Osaka master Ryûkôsai than to any Edo artist of the period, and Ryûkôsai's actor portraits in hosoban format preceded Sharaku's by about three years. Some of Sharaku’s portraits were of Osaka actors performing in Edo, perhaps an indication of his special interest in these particular entertainers. Proponents of this theory also argue that only an artist who was himself a Noh actor could become so familiar with the "true" facial features of various actors. (Henderson and Ledoux, 1939).

Another popular theory is that Sharaku was a phantom, a pen name for another known artist, perhaps Utamaro, based on similarities in style. Others have suggested that Sharaku was actually his publisher, Tsutaya Juzaboro, who died only a few years after Sharaku became inactive. Still others point to the fact that a kite with a Sharaku print on it showed up on a novel cover, leading some to believe he was actually a kite maker (Narazaki, 1983). Another speculation, associating Sharaku with the great ukiyo-e master Hokusai, stems from Hokusai's disappearance from the art world between the years of 1792 and 1796, the period during which Sharaku's work began to appear.

Other theories, which lack convincing evidence, include claims that Sharaku was the artist Toyokuni Kiyomasa; the 'haiku' poet Sharaku residing in Nara and appearing in manuscripts from 1776 and 1794; or a certain Katayama Sharaku, the husband of a disciple named Nami at the Shintô headquarters at the Konkô-kyô, who was said to have resided at Tenma Itabashi-chô, Osaka. A final theory claims that Sharaku was not a person, but a project launched by a group of artists to help a woodblock print house that had aided them. According to this theory, the name Sharaku is taken from sharakusai, "nonsense," and is an inside joke by the artists, who knew that there was no actual Sharaku. The four distinct stylistic changes during Sharaku’s short career lend credibility to this claim. It was common for woodblock prints during this time to involve anywhere from five to ten or more artisans working together; it seems unlikely that none of them would reveal Sharaku's true identity, or otherwise leave some information about Sharaku behind. 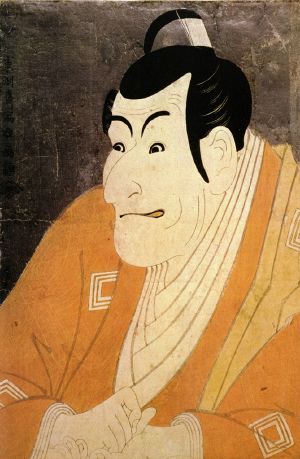 One possible explanation for Sharaku's sudden disappearance is the radical and caricature-like way in which Sharaku portrayed the actors. It might have been regarded as offensive by a public that wanted idealized depictions of their favorite actors instead of exaggerated but truthful portraits. Explanations of Sharaku's mysteriously brief career and sudden disappearance are often based on a statement by the artist and writer Ota Nanpô (with additions in 1800 by Sasaya Kuniori), who wrote during the Kansei era in Ukiyo-e ruikô ("History of Floating World Prints," surviving copy from 1831) :"Sharaku designed likenesses of Kabuki actors, but because he depicted them too truthfully, his prints did not conform to accepted ideas, and his career was short.."

There may have been other circumstances which contributed to Sharaku’s abrupt disappearance from print-making, such as commitment to his Noh troupe, or the loss of patronage. Sharaku’s later designs depicted actors in poses not directly related to stage performances (a genre called mitate), which might not have sold well. One conjecture is that his master was unhappy with Sharaku’s association with the kabuki theatre, instead of the more refined Noh theater, but there is no evidence supporting or refuting this.

Sharaku’s work did not become popular among collectors in Japan until artists and collectors in the West discovered him in the late nineteenth century. He is now considered one of the greatest of all woodblock artists, and the first 'modern' artist of Japan.

His prints, with their tendency to wring the last drop of truth from his subjects through close depiction of personal characteristics, have earned Sharaku a reputation as an outstanding portrait artist. The extraordinarily rare extant originals of his prints command fantastic sums at auctions. In 1997, a Sharaku print from the Vever collection in modest condition was sold at Sothebys for USD $296,000.

Retrieved from https://www.newworldencyclopedia.org/p/index.php?title=Sharaku&oldid=1098185
Categories:
Hidden category:
This page was last edited on 27 January 2023, at 13:17.
Content is available under Creative Commons Attribution/Share-Alike License; additional terms may apply. See Terms of Use for details.