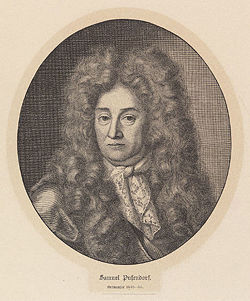 Baron Samuel von Pufendorf (January 8, 1632 – October 13, 1694), was a German jurist, political philosopher, economist, statesman, and historian. His name was just Pufendorf until he was ennobled in 1684; he was made a baron a few months before his death in 1694. His commentaries and revisions of the theories of Thomas Hobbes and Hugo Grotius advanced the development of the theory of natural law and distinguished between the hegemony of church and state. Unlike Hobbes, he believed that it was the nature of human beings to live sociably in peace. War was justifiable if it was necessary to establish and maintain that peace. His work De habitu religionis christianae ad vitam civilem (Of the power of the Christian religion in relation to the life of a citizen) traced the limits between ecclesiastical and civil power and propounded a "collegial" theory of church government (Kollegialsystem), which, developed later by the learned Lutheran theologian Christoph Mathkus Pfaff, formed the basis of the relations of church and state in Germany and more especially in Prussia, and opened the way for official tolerance of religious differences by European governments.

Samuel Pufendorf was born January 8, 1632, at Dorfchemnitz Stollberg District, in the ore mountains (Erzgebirge) in the Duchy of Saxony, Germany. His father, Elias Pufendorf from Glauchau was a Lutheran pastor, and Samuel Pufendorf himself was destined for the ministry. Educated at the ducal school (Fürstenschule) at Grimma, he was sent to study theology at the University of Leipzig. He soon abandoned the narrow and dogmatic religious teaching for the study of public law.

Leaving Leipzig altogether, Pufendorf relocated to the University of Jena, where he formed an intimate friendship with Erhard Weigel, the mathematician, whose influence helped to develop his remarkable independence of character. Under the influence of Weigel, he started to read Hugo Grotius, Thomas Hobbes and René Descartes.

Pufendorf left Jena in 1658 as Magister and, with the help of his brother Esaias, a diplomat in the Swedish service, became a tutor in the family of Petrus Julius Coyet, one of the resident ministers of King Charles X of Sweden, at Copenhagen. At this time, Charles Gustavus was endeavoring to impose an unwanted alliance on Denmark, and in the middle of the negotiations he opened hostilities. The anger of the Danes was turned against the envoys of the Swedish sovereign; Coyet succeeded in escaping, but the second minister, Sten Bielke, and the rest of the staff, including Pufendorf, were arrested and thrown into prison. During his eight months of captivity, Pufendorf occupied himself in meditating upon what he had read in the works of Hugo Grotius and Thomas Hobbes and mentally constructed a system of universal law. At the end of his captivity, he accompanied his pupils, the sons of Coyet, to the University of Leiden, where he was permitted to publish his reflections in 1661, under the title of Elementa jurisprudentiae universalis libri duo (Elements of Universal Jurisprudence).

The work was dedicated to Charles Louis, elector palatine, who created a new chair of the law of nature and nations, the first of its kind in the world, at the University of Heidelberg for Pufendorf. Pufendorf married Katharina Elisabeth von Palthen, the widow of a colleague in 1665. In 1667 he wrote, with the assent of the elector palatine, a tract, De statu imperii germanici liber unus (On the Condition of the German Empire). Published under the cover of a pseudonym at Geneva in 1667, it was supposed to be addressed by a gentleman of Verona, Severinus de Monzambano, to his brother Laelius. The pamphlet caused a sensation by directly challenging the organization of the Holy Roman Empire, denouncing in the strongest terms the faults of the house of Austria, and attacking with vigor the politics of the ecclesiastical princes. Earlier, Philipp Bogislaw von Chemnitz, publicist and soldier, had written, under the pseudonym of "Hippolytus a Lapide," De ratione status in imperio nostro romano-germanico. Inimical, like Pufendorf, to the house of Austria, Chemnitz had gone so far as to make an appeal to France and Sweden. Pufendorf, on the contrary, rejected all idea of foreign intervention, and advocated that of national initiative. When Pufendorf went on to criticize a new tax on official documents, he was denied the chair of law and had to leave Heidelberg in 1668. Chances for advancement were few in a Germany that still suffered from the ravages of the Thirty Years' War (1618-1648), so Pufendorf went to Sweden.

In 1670 Pufendorf was called to the University of Lund. In 1672 he published the De jure naturae et gentium libri octo (On the Law of Nature and of Nations), and in 1675 a résumé of it under the title of De officio hominis et civis ("On the Duty of Man and Citizen") describing his analysis of just war theory.

In 1688 Pufendorf was called into the service of Friedrich Wilhelm I of Brandenburg. He accepted, but no sooner had he arrived than the elector died. His son Frederick III of Brandenburg fulfilled the promises of his father; and Pufendorf, historiographer and privy councillor, was instructed to write a history of the Elector Frederick William, De rebus gestis Frederici Wilhelmi Magni. The King of Sweden created Pufendorf a baron in 1694. The same year, while still in Sweden, Pufendorf suffered a stroke, and died shortly afterward in Berlin. He was buried in the church of St Nicholas, where an inscription to his memory can still be seen.

Samuel von Pufendorf was a Protestant caught up in the political aftermath of the Thirty Years War (1618-1648), a series of conflicts between Protestants and the Roman Catholic Church which involved many European nations and ended with the Treaty of Westphalia in 1848. These conflicts highlighted the struggle for political control between various European monarchs and the Roman Catholic Church. Pufendorf was concerned with reconciling the political theories of the early Enlightenment with Christian theology.

Early in his academic career, Pufendorf was influenced by Hugo Grotius and Thomas Hobbes. In De jure naturae et gentium (On the Law of Nature and of Nations), and De officio hominis et civis ("On the Duty of Man and Citizen") he took up the theories of natural law proposed by Grotius and sought to complete them by means of the doctrines of Hobbes and of his own ideas. His first important point was that natural law does not extend beyond the limits of this life and that it confines itself to regulating external acts. He disputed Hobbes's conception of the state of nature and concluded that the state of nature is not one of war but of peace. He identified the true foundation of natural law as the “sociality” of humankind, concluding that God had created man to live in society with others. “Any man must, inasmuch as he can,” he wrote, “cultivate and maintain toward others a peaceable sociality that is consistent with the native character and end of humankind in general.” Peace, however, was insecure, and “just war” was sometimes necessary to secure and maintain it.

“It must absolutely be maintained that the obligation of the natural law is from God himself, the creator and supreme governor of the human race, who by virtue of his sovereignty over men, his creatures, has bound them to its observance.…He formed the nature of things and of man in such a way that the latter cannot be preserved without a sociable life." (Samuel von Pufendorf)

In the area of public law, Pufendorf, while regarding the state (civitas) as a moral person (persona moralis), taught that the will of the state was nothing more than the sum of the individual wills that constituted it. Like Hobbes and Grotius, Pufendorf maintained that the law of nations was a branch of natural law, and should not be treated as positive law (law which has been decreed by human beings). Pufendorf strongly defended the idea that international law is not restricted to Christendom, but constitutes a common bond between all nations because all nations form part of humanity.

In his historical works, Pufendorf wrote in a dry style, but he professed a great respect for truth and generally drew from archival sources. In his De habitu religionis christianae ad vitam civilem (Of the power of the Christian religion in relation to the life of a citizen) he traces the limits between ecclesiastical and civil power. This work propounded for the first time the so-called "collegial" theory of church government (Kollegialsystem), which, developed later by the learned Lutheran theologian Christoph Mathkus Pfaff, formed the basis of the relations of church and state in Germany and more especially in Prussia.

This collegial theory makes a fundamental distinction between the supreme jurisdiction in ecclesiastical matters (Kirchenhoheit or jus circa sacra), which it conceives as inherent in the power of the state in respect of every religious communion, and the ecclesiastical power (Kirchengewalt or jus in sacra) inherent in the church, but in some cases vested in the state by tacit or expressed consent of the ecclesiastical body. The jurisdiction of natural law was confined to physical life on earth; therefore the state had nothing to do with theological matters such as eternal salvation.

The theory was important because, by distinguishing church from state while preserving the essential supremacy of the state government, it prepared the way for the principle of religious toleration. It was put into practice to a certain extent in Prussia in the eighteenth century; but it was not till the political changes of the nineteenth century led to a mixture of faiths and denominations within each political state that it found universal acceptance in Germany. Though the theory was not accepted by the Roman Catholic Church, it allowed the Protestant governments to make a viable compromise with Rome regarding the Catholic Church established in their states.

Pufendorf is seen as an important precursor of the Enlightenment in Germany. He was involved in constant quarrels with clerical circles and frequently had to defend himself against accusations of heresy. A lifelong quarrel with Leibniz which began over the pamphlet Severinus de Monzambano somewhat undermined his influence in Germany. Locke, Rousseau, and Diderot all recommended that the works of von Pufendorf be included in law curricula, and Pufendorf greatly influenced Blackstone and Montesquieu, who in turn introduced his thought to the American founding fathers, Alexander Hamilton, James Madison, and Thomas Jefferson.