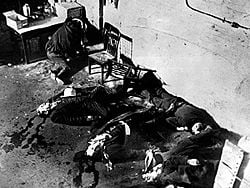 The Saint Valentine's Day Massacre is the name given to the shooting of seven people (six of them gangsters) as part of a Prohibition Era conflict between two powerful criminal gangs in Chicago, Illinois, in the winter of 1929: The South Side Italian gang led by Al "Scarface" Capone and the North Side Irish/German gang led by George "Bugs" Moran. The Purple Gang was also suspected of playing a large role in the St. Valentine's Day massacre, assisting Al Capone.

On the morning of Friday, February 14, St. Valentine's Day, six members of George "Bugs" Moran's gang and a doctor who happened to be at the scene were lined up against the rear inside wall of the garage of the S-M-C Cartage Company in the Lincoln Park neighborhood of Chicago's North Side. They were then shot and killed by five members of Al Capone's gang (two of whom were dressed as police officers). When one of the dying men, Frank "Tight Lips" Gusenberg, was asked who shot him, he replied, "Nobody shot me." Capone himself had arranged to be on vacation in Florida at the time.

The massacre was a result of a plan devised by Capone's gang member Jack "Machine Gun" McGurn to eliminate Moran, Capone's chief criminal enemy. The massacre was planned by McGurn partly in retaliation for an unsuccessful attempt by Frank and his brother Peter Gusenberg to murder him a month earlier. Territorial tensions between "Bugs" Moran and Al Capone about who would own the Chicago bootlegging business, and make the most money from it, also led Capone to accept McGurn's plan for the killings.

McGurn assembled a team of six men, led by Fred Burke with the intent of having Moran lured into an ambush. Bugs and his men would be tricked into visiting a warehouse on North Clark Street on the pretext of buying some bargain hijacked bootleg whiskey; Burke's team would then enter the building disguised as police officers and kill them. The chief architects of the plan, McGurn and Capone, would be well away from the scene. It was actually the leader of the Purple Gang that called Moran for the delivery of booze.[1]

Before any shooting had begun, Capone had placed lookouts in the apartments across the street from the warehouse. Capone, wishing to keep the lookouts inconspicuous, chose two men from another state to keep watch. Four members of the McGurn gang drove to the warehouse in a stolen police car around 10:30 a.m., two dressed in police uniforms and two in ordinary street clothes. Moran, supposedly watching the warehouse, spotted the police car and fled. However, one of McGurn's lookouts confused one of Moran's men for Moran himself, and gave the signal to McGurn's men and they approached the warehouse.

At the warehouse, two men dressed in police uniforms and carrying shotguns entered, where they found six members of Moran's gang and a man whom they believed to be a member of the gang, but who it was later revealed was simply a doctor who was friends with one of the gangsters. The men dressed as police officers told the six men to line up facing the back wall, which they apparently did willingly, believing their captors were real (and comparatively harmless) police. Two more men in plain clothes then entered, apparently unseen. The two plainclothes men pulled off their coats, revealing Thompson sub-machine guns. All seven men were then shot and killed in a storm of two-hundred bullets, some one-hundred of which found their targets, along with two shotgun shells according to the coroner's report.[2] Murdered were James Clark (also known as Albert Kachellek), Frank and Pete Gusenberg, Adam Heyer, Johnny May, optometrist Dr. Reinhardt Schwimmer, and Al Weinshank.

To show by-standers that everything was under control, two of Capone's men dressed as civilians came out with their hands up, led by the gang members posing as police officers. John May's Alsatian dog was the only survivor. Cops heard the howling of the dog and arrived at the SMC Cartage to find the dog trapped under a beer truck and floor covered with blood and bullet shells.

Hired by Capone because of their reputation, The Purple Gang was a mob of bootleggers and hijackers in the 1920s. Under the leadership of Abe Bernstein, the gang operated out of Detroit, Michigan, in the United States, which was a major port for running cached alcohol products across during Prohibition, since it is on the border with Canada.[3] The history of the organization was recounted vividly in Paul R. Kavieff's The Purple Gang: Organized Crime in Detroit 1910-1945. Perhaps the most ruthless bootleggers of their time, they may have killed over 500 members of rival bootlegging gangs during Detroit's bootleg wars.

The massacre marked the beginning of an end to Moran's power. However, with the gang members he had left, Moran managed to keep control of his territory until the early 1930s. The event also brought the belated and full attention of the federal government to Capone and his criminal activities. This was ultimately Capone's downfall, for it led to his conviction on income tax evasion charges in 1931. The massacre no doubt took down both Moran and Capone and left the bloody turf war they had with each other in a stalemate.

The garage, which stood at 2122 N. Clark Street,[4] was demolished in 1967; the site is now a landscaped parking lot for a nursing home. The wall was dismantled brick by brick, sold at auction and shipped to George Patey of Vancouver, a Canadian businessman, who rebuilt it in the men's restroom of a bar with a Roaring Twenties theme called the Banjo Palace. After the bar closed, Patey began trying to sell the bricks as souvenirs.

The guns, weapons, and evidence are currently being held in the Berrien County Sheriff's Department in Michigan.

There was never a clear outcome to this crime. It remains a true murder mystery to this day. Al Capone was never arrested for the crime and the gun men were never captured. Al Capone did spend seven years in prison for tax evasion. Upon his release he moved to Florida, where he died from syphilis, in 1947.

Retrieved from https://www.newworldencyclopedia.org/p/index.php?title=Saint_Valentine%27s_Day_Massacre&oldid=1092575
Categories:
Hidden category:
This page was last edited on 23 December 2022, at 00:55.
Content is available under Creative Commons Attribution/Share-Alike License; additional terms may apply. See Terms of Use for details.