Symeon the New Theologian (949 – 1022) was a Byzantine monk and mystic who became one of the most important spiritual influences in the Eastern Orthodox Church. He is one of three Eastern saints—together with St. John the Apostle and St. Gregory Nazianzen—to have been given the title of theologian. The term "new" does not refer to his theology, but his status as the later of several other saints named Symeon. The title "theologian" is related to his emphasis on achieving direct knowledge of God through prayer and contemplation, even more than his substantial intellectual endeavors.

Born in Galatia to a wealthy family and educated at Constantinople, Symeon desired to enter monastic life at 14 but was directed by his spiritual father, the abbot of the monastery at Studios, to delay this commitment until adulthood. After a period of administrative and public service, Symeon entered the Studion at age 27 and rose quickly to become the abbot of the monastery of St. Mamas. A later controversy caused him to resign from that office, but his fame as a mystic, together with the substantial body of literary work which he left, won him a lasting place in the Orthodox tradition.

Symeon was a poet who embodied the mystical tradition. He wrote that humans could and should experience God directly. Although controversial in his own time, his many works were widely read in Orthodox monasteries and influenced the hesychastic controversy of the fourteenth century. He continues to be a major literary source of Orthodox spirituality today. His feast day in the Orthodox tradition is celebrated on March 12.

Symeon the New Theologian was born at Paphlagonia in Asia Minor in 949 C.E. to parents of the Byzantine nobility: Basal and Theophana. He received the basics of a classical education at Constantinople. At the age of 14, he became a disciple of St. Symeon the Studite, abbot of the monastery at Studios, and determined to devote himself to a life of Christian asceticism and prayer. He desired to enter the monastery, known as the Studion, immediately, but the elder Symeon instructed him to wait, gradually preparing his young pupil for monastic life while providing him to gain valuable experience in "the world." Symeon managed the household of a local patrician and seems to have entered imperial service as well, including serving as a senator. In the evenings he engaged in spiritual practices and read the spiritual works of such men as the ascetic writer Mark the Hermit and Diadochus of Photike, author of the One Hundred Chapters on Spiritual Perfection. 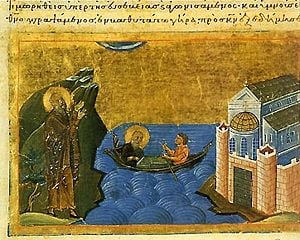 The Studion, where Symeon the New Theologian was trained under Symeon the Studite.

Symeon's description of the illumination of "George" is thought to be autobiographical. In it, he describes how George, at the age of 20, experienced an overwhelming ecstatic state in which he experienced God as living, radiant light. At the age 27, Symeon finally became a monk and entered the Studion, taking the name Symeon in honor of his teacher. When church authorities grew concerned that master and pupil were growing too close, the younger Symeon was faced with either remaining at the Studion but not receiving his master's spiritual guidance or transferring elsewhere and remaining in contact with him.[1]

It was under these circumstances that Symeon entered the monastery at St. Mamas in Constantinople. He became the abbot of St. Mamas around 980. There, he wrote many works and gathered numerous disciples. However, his policy of strict asceticism was considered too extreme, and he was forced to resign in 1009 by the patriarch of Constantinople.[2] Nevertheless, his writings continued to appeal to mystically oriented monks throughout the centuries.

Symeon's attitude was one of mystical contemplation, more typical of the eastern Orthodox tradition than the Western Catholic version of Christianity.

His writings and descriptions of his personal experiences laid the foundation for the eastern tradition of Hesychasm, which became an important movement in the Eastern Church in the fourteenth century. This movement centered on the so-called "cardiac prayer" and meditation, designed to bring the practitioner into union with God, while retaining a sense of Christian humility.

Symeon's emphasis on the essence of Christian experience as one of the "heart" became particularly influential. "Our holy fathers have renounced all other spiritual work and concentrated wholly on this one doing, that is, on guarding the heart," he stated, "convinced that, through this practice, they would easily attain every other virtue, whereas without it not a single virtue can be firmly established."

Symeon held that a personal mystical relationship with God is essential to a proper understanding of scripture and theology. He taught that through constant prayer, meditation, and ascetic discipline, one could attain a direct union with God, conceived both as the Trinity and as the Divine Unknown. He called this divinizing process "theosis" or “vision of light.”

His works consist of transcribed sermons given to his monks, doctrinal writings, and moral instructions and monastic rules, and his famous Hymns of the Divine Loves. The latter includes descriptions of his mystical experiences through prayer and meditation.

Symeon the New Theologian was a major influence on the mystical tradition of Eastern Orthodoxy. His emphasis on the availability of a direct, transforming experience with God through the mystical "vision of light" became central in the later tradition of Hesychasm. His writings, especially his providing an experiential pathway to personal knowledge of God, earned him not only the title of saint, but of "theologian," a high honor in Orthodox tradition.

He remains a strong influence in Orthodox spirituality today, especially among the Hesychastic monks at Mount Athos, but also throughout the Orthodox intellectual and mystical tradition.

Retrieved from https://www.newworldencyclopedia.org/p/index.php?title=Saint_Symeon_the_New_Theologian&oldid=1023922
Categories:
Hidden category:
This page was last edited on 31 August 2019, at 20:22.
Content is available under Creative Commons Attribution/Share-Alike License; additional terms may apply. See Terms of Use for details.