Saint Teresa of the Andes

Saint Teresa of the Andes, known formally as Saint Teresa of Jesus of the Andes, (July 13, 1900 – April 12, 1920) was a Chilean nun canonized as a saint by the Roman Catholic Church. She was born in Santiago and felt a deep connection to both Mary and Jesus as a girl, entering the Carmelite convent at Los Andes, Chile at age 19. Her life was one of devotion and sacrifice for the sake of the purification of the Catholic Church and its priests.

Sister Teresa received a premonition of her death after only a year of religious life, having contracted typhus on April 12, 1920. She left a diary of her spiritual life as a teenager, as well as many letters written to friends and family after entering the convent, which bear eloquent testimony to her saintly qualities. She was beatified on April 2, 1987 at Santiago, by Pope John Paul II on March 21, 1993. She is a patron saint of bodily ills, sick people, and young people.

Teresa of Jesus of the Andes was born as Juana Fernández del Solar in Santiago, Chile: her nickname was "Juanita." She was the daughter of an upper class mining family, the fourth of six children. Juanita loved horseback riding and was known for being a vivacious and pretty girl.

Early in her life she read an autobiography of the French Saint Thérèse of Lisieux, a Carmelite nun whose short life and simplicity of faith had a profound effect on Juanita's already pious character. She reported hearing the voice of the Virgin Mary as a child, which she considered to be a normal occurrence. She made her first communion at the age of 11, at which time she heard the voice of Jesus for the first time. This began a regular course of conversion between her and her Lord, often speaking to him around the time of her receiving the Eucharist.

"He told me things that would happen, and they did happen," she reported. Her local spiritual adviser recognized something special about the girl and advised her at the age of 15, to begin a diary of her interior experiences. This would later play a role in her canonization.

In other ways, she was a normal teenager, who battled with her pride over her prettiness, had crushes on the local boys, and enjoyed dating. She felt that marriage would not have separated her from God, but her spiritual sense was so strong that she eventually decided that she wanted to serve God completely by becoming a nun. 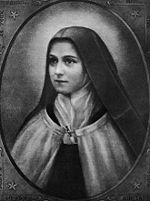 Thérèse of Lisieux, the namesake of Saint Teresa of the Andes

In 1919, at age 19, Juanita joined the Carmelite nuns, entering the Monastery of los Andes and taking the name Teresa. Her family supported her vocation, but wanted her to live closer to Santiago and to choose a more comfortable accommodation. Teresa rejected their entreaties, believing that this austere Carmelite tradition offered the simple lifestyle she desired and the joy of living in a community of women absolutely devoted to God. She entered the convent in May, 1919 and took the habit in October, although she had not yet taken final vows as a nun.

Teresa had many mystical experiences and expressed a tremendous sense of joy in God's love:

Teresa began an apostolate of letter-writing, sharing her thoughts on the spiritual life with many people. She focused her days on prayer and sacrifice, offering herself as a "spiritual victim" for the good of the Church and the sanctification of priests. "A Carmelite sanctifies herself in order to make all the Church's members holy," she wrote. "The goal she proposes to herself is very great: to pray and sanctify herself for sinners and priests. To sanctify herself so that the divine sap may be communicated through the union that exists between the faithful and all members of the Church. She immolates herself on the cross, and her blood falls on sinners, pleading for mercy and repentance, for on the cross she is intimately united to Jesus Christ. Her blood, then, is mixed with His Divine Blood."

During Lent in 1920, she told her confessor that she sensed she would die within a month. She asked for extra penance for the sins of mankind. She was advised to put her life in God's hands, as she had been doing, and she thus redoubled her efforts at prayer and service. A fellow nun recognized that Teresa was seriously ill on Good Friday. A doctor was called but could offer no relief. Theresa was allowed to make her formal profession as a nun on her death bed. She died shortly later, on April 12, 1920. 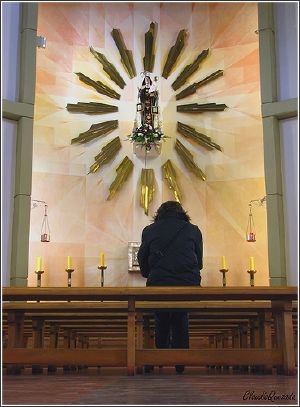 A pilgrim prays at the shine of Teresa of the Andes

Saint Teresa of the Andes was beatified on April 2, 1987 on March 21, 1993. She is a patron saint of bodily ills, sick people, and young people. She is Chile's first saint, and is especially popular among females and younger people.

An estimated 100,000 pilgrims visit her shrine in Los Andes each year. Many schools and churches are named after her.

Teresa's diary and letters are an inspiration to young Catholics, much in the spirit of the writings of her namesake, Thérèse de Lisieux.

Excepts from her letters

Retrieved from https://www.newworldencyclopedia.org/p/index.php?title=Saint_Teresa_of_the_Andes&oldid=1092571
Categories:
Hidden category:
This page was last edited on 23 December 2022, at 00:53.
Content is available under Creative Commons Attribution/Share-Alike License; additional terms may apply. See Terms of Use for details.