Saint Alphege is the Latinate name of Ælfheah (954–19 April, 1012 C.E.), the Anglo-Saxon Bishop of Winchester and, later, Archbishop of Canterbury. The saint first distinguished himself for his commitment to Christian monastic ideals, leaving his comfortably upper-class station for the privation of life as an anchorite and monastic. His reputation for sanctity eventually earned him the archbishopric of Canterbury, which he administered from 1006 until his death in 1012.

After Alphege's martyrdom at the hands of Danish invaders, his relics came to be the locus of a popular cult, which eventually led to his canonization in 1078.

In 954 C.E., Ælfheah (the future Saint Alphege) was born into a noble Christian family in Weston (Somerset).[1] In his early adolescence, the youth chose to forsake his family (including his woe-stricken mother) and his comfortable lifestyle in order to fully dedicate himself to the monastic life.[2] Having assumed the cenobitic lifestyle in the monastery of Deerhurst, he passed thence to Bath, where he furthered his ascetic devotions by becoming an anchorite. The young monk's superabundant piety and austerity soon brought him considerable fame, which eventually culminated in the establishment of a community of lay devotees around his anchor-hold. Saint Dunstan, the primate of Britain's monastic communities, convinced the youth to become the abbot of this newly formed congregation.[3][4] [5]

In 984, Dunstan importuned Aelfheah to accept the Bishopric of Winchester, despite his relative youth and lack of experience.[6] Butler provides a useful summary of this period: "In this position his high qualities and exceptional abilities found a wider scope. His liberality to the poor was so great that during the period of his episcopate there were no beggars in the diocese of Winchester. Adhering to the austerity of his monastic days, he became so thin through prolonged fasts that men declared that they could see through his hands when he uplifted them at Mass."[7] During his tenure as Bishop of Winchester, Aelfheah also served as an envoy to the marauding Vikings, in which capacity he convinced King Olaf I of Norway to accept Christian Confirmation, with British King Aethelred as his godfather. Accepting this new familial bond, the Scandinavian lord agreed to abstain from all hostilities against the British—a promise he kept until his death.[8]

Given his overall popularity and his distinguished reputation, Aelfheah was a self-evident choice for the Archbishopric of Canterbury, a position he assumed in 1006.[9][10] He fulfilled his ecclesiastical role uneventfully for six years, despite the intermittent assaults of Danish raiding parties. This relative peace was abruptly shattered in 1011, when a party of hostile Danes sacked Canterbury and took the popular bishop hostage.[11] Though a captive, Aelfheah refused to submit to the Danish invaders, and beseeched his followers to deny their ransom demands. Following a lengthy (and undoubtedly unpleasant period of imprisonment), the saint's recalcitrance eventually infuriated his captors, which culminated in his murder on April 19th, 1012.[10][9]

The specific details of his death can be found in the Anglo-Saxon Chronicle, a relatively contemporaneous text:[12]

Then on the Saturday was the army much stirred against the bishop; because he would not promise them any fee, and forbade that any man should give anything for him. They were also much drunken; for there was wine brought them from the south. Then took they the bishop, and led him to their hustings, on the eve of the Sunday after Easter, which was the thirteenth before the calends of May; and there they then shamefully killed him. They overwhelmed him with bones and horns of oxen; and one of them smote him with an axe-iron on the head; so that he sunk downwards with the blow; and his holy blood fell on the earth, whilst his sacred soul was sent to the realm of God.[13] 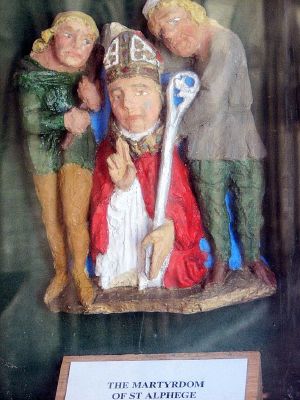 The painted carving of the martyrdom of Saint Alphege, in Canterbury Cathedral.

Once recovered from the invaders, the martyr's body was buried in St Paul's Cathedral, whose demesnes were immediately sanctified by the deceased saint's spiritual power. His burial is described in the Anglo-Saxon Chronicle:

the corpse in the morning was carried to London; and the bishops, Ednoth and Elfhun, and the citizens, received him with all honour, and buried him in St. Paul's minster; where God now showeth this holy martyr's miracles.[14]

The continued cultus of the saint was such that King Canute petitioned to move his relics to Canterbury, with all the ceremony of a great act of state, in 1023.[15] Despite some questions as to the propriety of his cult,[16] Alphege was canonised in 1078. An incised paving slab to the north of the present High Altar of Canterbury Cathedral marks the place where the medieval shrine is believed to have stood. His feast day commemorates the date of his untimely death: April 19th.

Given his formative role in British Christianity, it is not surprising that many churches are dedicated to the saint. Some of these include: Saint Alphege the Martyr in Canterbury (now used as an urban studies centre); Saint Alfege's Church, Greenwich (which is thought to mark the spot of the saint's martyrdom); Saint Alphege's Chruch in Bath, UK; the twin churches of Saint Alphege Whitstable and Saint Alphege Seasalter; and Saint Alphege in Solihull, found in the urban centre of the Metropolitan Borough of Solihull.

Retrieved from https://www.newworldencyclopedia.org/p/index.php?title=Saint_Aelfheah&oldid=1092467
Categories:
Hidden category:
This page was last edited on 22 December 2022, at 19:03.
Content is available under Creative Commons Attribution/Share-Alike License; additional terms may apply. See Terms of Use for details.