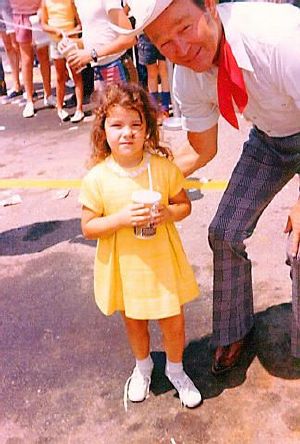 Roy Rogers, born Leonard Franklin Slye (November 5, 1911 – July 6, 1998), was an American cowboy actor and singer. He and his wife Dale Evans, his golden palomino Trigger, and his German shepherd, Bullet, were featured in over 100 movies and The Roy Rogers Show, which ran on radio for nine years before moving to television from 1951 through 1964. Rogers' productions usually featured two sidekicks, Pat Brady, (who drove a jeep called "Nellybelle"), and the crotchety bushwhacker Gabby Hayes. Rogers' nickname was "King of the Cowboys". For many Americans and people throughout the world, he was the embodiment of the all-American hero.

Rogers was born to Andrew & Mattie (Womack) Slye in Cincinnati, Ohio, where his family lived in a tenement building on 2nd Street. (Riverfront Stadium was constructed at this location in 1970 and Rogers would later joke that he had been born at second base.) Dissatisfied with his job and city life, Andrew Slye and his brother Will built a 12-by-50-foot houseboat from salvage lumber, and in July 1912 the Slye family floated up the Ohio River towards Portsmouth, Ohio. Desiring a more stable existence in Portsmouth, Rogers' parents purchased land on which to build a home, but a flood in 1913 allowed them to simply move the houseboat to their property and continue living in it on dry land.

In 1919 the Slyes purchased a farm about 12 miles north of Portsmouth at Duck Run, near Lucasville, Ohio. There they built a six-room home. Rogers' father soon realized that the farm alone would provide insufficient income for his family, and he took a job at a shoe factory in Portsmouth. Living away from the family during the week and returning home on the weekends, Roy's father brought gifts for the family following paydays, one of which was a horse, Babe, on which Rogers learned his horsemanship. The family lived too far from town to receive clear radio signals, so nights were spent entertaining themselves. Roy became a popular local singer, mandolin player, and square dance caller. He also learned to play the guitar and yodel.

After completing the eighth grade, Rogers attended high school at McDermott, Ohio. When he was 17 his family returned to Cincinnati, where his father began work at a shoe factory. Rogers soon decided on the necessity to help his family financially, so he quit high school, joined his father at the shoe factory, and began attending night school. After being ridiculed for falling asleep in class, however, he quit school and never returned.

In 1929, Rogers had the opportunity to travel to California with his sister's father-in-law, and the rest of the family followed in the spring of 1930. Rogers and his father immediately found employment as truck drivers for a highway construction project. They reported to work one morning, however, to learn their employer had gone bankrupt. The economic hardship of the Great Depression had followed them West, and the Slyes soon found themselves among the economic refugees traveling from job to job picking fruit and living in worker campsites. One day Andy Slye heard of a shoe factory hiring in Los Angeles and asked Roy to join him in applying there for work. Rogers, having seen the joy that his guitar and singing had brought to the destitute around the campfires, hesitantly told his father that he was going to pursue a living in music. With his father's blessing, he and cousin Stanley Slye went to Los Angeles and sought musical engagements as The Slye Brothers.

In 1933, Roy married Lucile Ascolese, but they were divorced three years later. The couple had no children.

After four years with little success as a singer, Rogers formed Sons of the Pioneers, a western cowboy music group, in 1934. The group scored hits with songs like "Cool Water" and "Tumbling Tumbleweeds."

From his first film appearance in 1935, Rogers worked steadily in western films, including a large supporting role as a singing cowboy in a Gene Autry movie while still going as "Leonard Slye" and later as "Dick Weston." In 1938 when Autry, the nation's top cowboy star, temporarily walked out on his movie contract, Slye was immediately rechristened "Roy Rogers." His stage name came from his childhood dentist, Roy Steele Rogers, who practiced in Hillsboro, Ohio and the surrounding countryside. He was given the lead role in Under Western Stars. Rogers soon became a matinée idol and American legend. In addition to his own movies, Rogers played a supporting role in the John Wayne classic Dark Command (1940), a harrowing fictionalization of Quantrill's Raiders directed by Raoul Walsh. 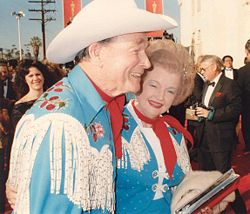 Roy Rogers and Dale Evans at an Academy Awards celebration

Due to his status as the idol of America's children, Rogers' movies were almost guaranteed money-makers, and most of his films were in color in an era when almost all other B-movies were black and white. Rogers' radio shows and his later television series were among America's most popular. A major marketing industry grew up around his name and image. There were Roy Rogers action figures, cowboy adventure novels, a comic strip, and a variety of other marketing successes featuring not only Roy but his whole "gang." His horse, Trigger, became a star in his own right, and some of Rogers' movies would segue into animal adventures, in which Trigger would take the lead role in his own sub-plot, with Rogers out of the picture.

Rogers' first sidekick was Smiley Burnette, who did two films with Rogers. Raymond Hatton did three films with him, and in 1939 Rogers' movie company, Republic, signed Gabby Hayes for the sidekick role in "Southward Ho." The two formed a pair of opposites, with Rogers as the young, clean-cut hero and Hayes as his grizzled but wise companion. They would make 40 films together, not to mention innumerable radio broadcasts. In the early 1940s, Pat Brady, Rogers' replacement in the Sons of the Pioneers, began playing zany camp cook Sparrow Biffle in many Roy Rogers films. In 1941, the Sons of the Pioneers co-starred with Rogers in Red River Valley, continuing their partnership with him in films through 1948.

By 1943 Rogers had become the top Western box office star and was being billed as the "King of the Cowboys." When Rogers moved to television in 1951, he took Brady with him, along with his horse, Trigger, his dog, Bullet, and of course, his wife, Dale Evans. Brady, now playing himself, would add a jeep named "Nellybelle" to the crowd. The show would air from 1951 through 1964, featuring more than 100 episodes, in which the "good guys" won every time. 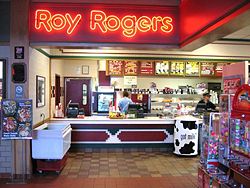 A Roy Rogers restaurant on the New York Thruway

Rogers and his second wife, Arline (Wilkins) had three children: an adopted daughter, Cheryl, and two biological children, Linda Lou and Roy Jr. Arline died of an embolism shortly after giving birth to Roy Jr. (Dusty) in 1946. Dale Evans was cast in a movie with Rogers in 1945. After Arline's death, Roy and Dale married. It was Dale's fourth marriage as well as Roy's third, but the couple, stayed together until Roy himself passed away. The couple adopted several children after the death of their natural child from complications of Downs' Syndrome.

Rogers entered the restaurant business in the late 1960s, founding the Roy Rogers Family Restaurants chain in partnership with the Marriott Corporation. Several hundred Roy Rogers restaurants had been established nationwide by the 1980s, reaching 650 at its peak. In 1990, Marriott sold the chain for $365 million to Hardee's.

Rogers and Evans became well known as advocates for adoption and as founders and operators of children's charities. In adopting an Native American girl as their first adopted child and following this with a Korean girl as her adopted sister, they did much to promote the ideal of interracial families at a time when such ideals were not popular. Both were also outspoken Christians. In Apple Valley, California, where they made their home, numerous streets and highways as well as civic buildings have been named after them in recognition of their efforts on behalf of homeless and handicapped children. Roy was an active Freemason and a Shriner and was noted for his support of their charities.

Roy and Dale's famous theme song, "Happy trails to you, Until we meet again … "—which Dale wrote and they sang as a duet to sign off their television show—has become an emblem of the Hollywood version of the American West.

Retrieved from https://www.newworldencyclopedia.org/p/index.php?title=Roy_Rogers&oldid=1092312
Categories:
Hidden category:
This page was last edited on 21 December 2022, at 20:50.
Content is available under Creative Commons Attribution/Share-Alike License; additional terms may apply. See Terms of Use for details.