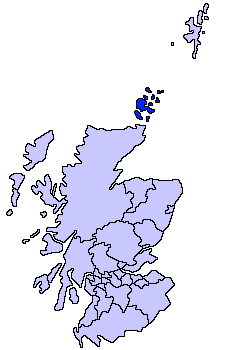 Rognvald "The Wise" Eysteinsson (son of Eystein Ivarsson) is the founder of the Earldom of Orkney in the Norse Sagas. Three quite different accounts of the creation of the Norse Earldom on Orkney and Shetland exist. The best known is that found in the Heimskringla, but other older traditions are found in the Historia Norvegiae and the Fragmentary Annals of Ireland. According to tradition, Rognvald Eysteinsson was appointed Eral in 875, but handed the responsibility to his brother, Sigurd. The earldom remained in the hands of their descendants until 1232. This era of Orkney's history is known as the Norse period.

Although the dynasty began with conquest, later Earls governed a peace-loving people and developed reputations for preferring negotiation over warfare, despite their Viking origins. The genre of literature that contains Rognvald Eysteinsson's story, though, also anticipates that global peace is the end-goal of history and celebrate peaceful, just reigns throughout the period they cover. It may not be accidental that the region covered by the Norse Saga contains some of the nation that are not only peaceful but which, through the United Nations and other international agencies, work to promote a peaceful, prosperous world for all people.

The geography of the Orkneys placed the islands and their inhabitants on a maritime frontier between Norway and Scotland. The islands are about 20 miles North of Scotland. From 875, the King of Norway claimed the Orkney islands and Norway remained overlord of the isles until 1468 when with Shetland they were ceded to Scotland. Vikings had settled in the islands, possibly discovering them when they were blown off course, which they used as a base from which they subdued the islands accompanied by Rognvald Eysteinsson, who become the first Earl of Orkney. The Vikings were no regarded as a lawless force. They not only raised Scotland and the English coastline but Norway too. Harold also took Shetland. Later, the Earls of Orkney acquired territory in Scotland, namely Caithness and Sutherland for which they were required to pay tribute to the King of Scotland. The Earls were vassals, then, of Norway and of Scotland. At this time, the Kings of Scotland also paid tribute to England for some territories South of the English-Scottish border. A complex system of vassalage thus spread across the North Sea. At time there were three earls of Orkney when the earldom was split among siblings and their heirs.

The saga accounts are the best known, and the latest, of the three surviving traditions concerning Rognvald and the foundation of the Earldom of Orkney. Recorded in the 13th century, their views are informed by Norwegian politics of the day. Once, historians could write that no-one denied the reality of Harald Fairhair's expeditions to the west recounted in Heimskringla, but this is no longer the case. The Norwegian contest with the Kings of Scots over the Hebrides and the Isle of Man in the middle 13th century underlies the sagas.[1]

In the Heimskringla, Rognvald is Earl of Møre. Known as "Mighty" and as "Wise" it is said that both descriptions were equally apt. He accompanies Harald Fairhair on his great expeditions to the west, to Ireland and to Scotland. Here, Rognvald's son Ivarr is killed. In compensation King Harald grants Rognvald the Orkneys and Shetlands. Rognvald himself returns to Norway, giving the northern isles to his brother Sigurd Eysteinsson[2]

The Heimskringla recounts other tales of Rognvald. It tells how he causes Harald Finehair to be given his byname Fairhair by cutting and dressing his hair, which had been uncut for ten years on account of Harald's vow never to cut it until he was ruler of all Norway,[3] and it makes him the father of Ganger-Hrólf, identified by saga writers with the Rollo (Hrólfr), ancestor of the Dukes of Normandy, who was said to have been established as Count of Rouen by King Charles the Simple in 931.[4]

The Historia Norvegiae's account of Rognvald and the foundation of the Orkney earldom is the next oldest, probably dating from the twelfth century. This account contains much curious detail on Orkney, including the earliest account of the Picts as small people who hid in the daytime, but it has little to say about Rognvald.

In the days of Harald Fairhair, king of Norway, certain pirates, of the family of the most vigorous prince Ronald [Rognvald], set out with a great fleet, and crossed the Solundic sea… and subdued the islands to themselves. And being there provided with safe winter seats, they went in summer-time working tyranny upon the English, and the Scots, and sometimes also upon the Irish, so that they took under their rule, from England, Northumbria; from Scotland, Caithness; from Ireland, Dublin, and the other sea-side towns.[6]

This account does not associate Rognvald with the earldom, but instead attributes it to his anonymous sons.

The oldest account of the Rognvald and the earldom of Orkney is that found in the Fragmentary Annals of Ireland. The annals survive only in incomplete copies made by Dubhaltach Mac Fhirbhisigh in the seventeenth century, but the original annals are believed to date from the lifetime of Donnchad mac Gilla Patráic (died 1039). The annals are known to have had an influence on later writings in Iceland.

The annals make Rognvald the son of "Halfdan, King of Lochlann." This is generally understood to mean Halfdan the Black, which would make the Rognvald of the annals the brother of Harald Finehair. However, the sagas claim that Rognvald's grandfather was named Halfdan.[7]

These events are placed after an account of the devastation of Fortriu, dated to around 866,[8] and the fall of York, reliably dated to late 867. However, such an early date makes it difficult to reconcile the saga claims that Harald Fairhair was involved in Rognvald's conquest of the northern isles.

Harald Finehair's victory in the Battle of Hafrsfjord, which gave him dominion over parts of Norway, is traditionally dated to 872, but was probably later, perhaps as late as 900.[9] What little is known of Scottish events in the period from the Chronicle of the Kings of Alba would correspond equally well with Harald's attacks on Scotland in the reign of Domnall mac Causantín (ruled 889–900).[10] However, this would not correspond with the sequence in the earliest account of the origins of the Orkney earldom, which places this a generation earlier.

The earldom established by Rognvald remained within his family until 1232. The Scandinavian influence and culture remained strong, and continues to be evident in place names as well as in vocabulary. The earldom was home to several knights of the Arthurian legends. The mythology of the Norse Saga that surrounds the story of Rognvald comprises a rich tapestry of colorful stories, memorable characters, heroic sacrifice, and epic battles. These stories are part of the heritage of the people of the Orkneys just as they are of other Scandinavian peoples.

The stories glorify war, including the subjugation of the Orkneys. Yet the story in which Rognvald Eysteinsson featured was actually about pacification; the king and his earl wanted to end the Viking raids from Orkney because they were too disruptive. Eventually, the whole region over which the heroes of these stories roamed, or rather sailed, including the Orkneys, transformed itself into one of the most peace-loving zones on earth. In modern times, the Scandinavian countries have evolved away from their ancient associations with belligerence and warfare to become leaders in promoting peace and diplomacy. Orkney may not officially be "Scandinavian" any more but it can be described as "a perfect place for peace loving people."[11] One of the earls, Magnus Erlendsson, descended from Rognvald through both parents, loved peace. He once refused to take part in a Viking raid. Instead, he stayed aboard the boat singing psalms. He later entered a peace treaty with his cousin, who claimed the Earldom and ruled jointly with him for several years until conflict flared up again. Still trying to negotiate peace, Magnus was captured and executed in 1115. When his son, also called Rognvald became Earl, he built a cathedral to commemorate his father, who was canonized by the Church. In the Norse sagas, history is understood as linear and progressive; after evil has been defeated, "all men and Gods will live at peace."[12] Indeed, the story of the island is replete with references to the people enjoying "peace and prosperity" under the earls who constantly attempted to forge peace with their enemies.[13] The Heimskringla also tells many stories of peace-making.[14]