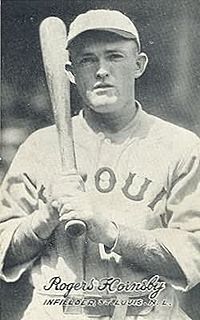 Rogers Hornsby (April 27, 1896 in Winters, Texas - January 5, 1963 in Chicago, Illinois), was a Major League Baseball second baseman and manager. Nicknamed "The Rajah," he spent most of his career with the St. Louis Browns and the St. Louis Cardinals, with short stints at several other clubs.

Hornsby ranks second on the list for highest career batting average, behind Ty Cobb's average of .366. His .358 career average is the highest for any right-handed hitter in baseball and any National League player. The Baseball Hall of Fame elected Hornsby in 1942. In 1999, he was naamed to the Major League Baseball All-Century Team.

In addition to his success on the field, Hornsby was one of baseball's more successful player-managers, guiding his Cardinals to a World Series victory over Babe Ruth and the New York Yankees in 1926. Hornsby, himself, tagged out Ruth trying to steal second base, thus ending that Series. 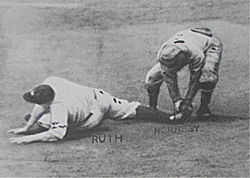 Hornsby tags out Babe Ruth, who was trying to steal second, to end the 1926 World Series.

Although he was one of the more controversial characters in baseball history, Hornsby did not drink or smoke; however, he was a compulsive gambler. As with Ty Cobb, his photogenic smile belied a dark side. One writer characterized him as "a liturgy of hatred," and according to legendary baseball writer Fred Lieb, he was a member of the Ku Klux Klan. His chief interest was in winning, and he could be as sarcastic and uncompromising with club owners as he was with his teammates.

When Hornsby was traded from the St. Louis Cardinals to the New York Giants after the 1926 season, the deal was held up because Hornsby, as part of his contract as the manager of the Cardinals (he was a player-manager at the time), owned several shares of stock in the Cardinals. Cardinals owner Sam Breadon offered Hornsby a sum for the stock considerably lower than what Hornsby demanded for it, and neither would budge. Eventually, the other owners of the National League made up the difference, and the trade went through.

As with some other star athletes, as a manager, he had trouble relating to players who shared neither his talent nor his zeal for winning. As his playing skills waned, he tended to be shuffled from team to team, wearing out his welcome quickly among his charges. Having won the World Series as a player-manager with the Cardinals, he was traded to the Giants for the 1927 season, then to the Boston Braves in 1928, and finally moved on to the Chicago Cubs in 1929, where he became their player-manager (and remained for three seasons thereafter), thus playing for four different teams in four years.

As Bill Veeck related in his autobiography, Veeck as in Wreck, his father Bill Sr., who was president and general manager of the Chicago Cubs, had hired Hornsby, and soon disposed of him when the usual problems surfaced. Some years later, when the junior Veeck hired Hornsby to manage his St. Louis Browns for a time, his widowed mother wrote him a letter asking, "What makes you think you're any smarter than your Daddy was?" After a near mutiny by the players, Veeck let Hornsby go, and his mother wrote back, "Told ya so!" Veeck, alert as ever to an opportunity for publicity, arranged a stunt in which he was awarded a trophy by the players for freeing them from Hornsby's control.

In his later years, Hornsby's disdain for younger players only increased. According to the book Can't Anybody Here Play This Game? (Breslin 2003) Hornsby was hired by the fledgling New York Mets to scout all the major league players. His report was not especially useful, as the best compliment he could come up with for anyone was "Looks like a major league ballplayer"—his assessment of Mickey Mantle. In another anecdote, Hornsby reviewed a group of major league players with his customary, none-too-complimentary remarks. Among the group were Chicago Cubs' third baseman Ron Santo and outfielder Billy Williams. Hornsby had just gotten through dimissing one player with the comment, "You'd better go back to shining shoes because you can't hit," when Santo whispered to Williams, "If he says that to me, I'm going to cry." When Hornsby came to Santo, he said, "You can hit in the big leagues right now," then turned to Williams and said, "So can you."

In another quote attibuted to him while coaching for the 1962 Mets, Hornsby was asked how well he thought he could hit the current crop of pichers if he were playing today, to which he replied "I guess I'd hit about .280 or .290." When asked why he'd hit for such a low average, Hornsby replied "Well, I'm 66 years old, what do you expect."

In contrast with his usual contempt for young players, he could be generous to those who had the "right stuff." When Hornsby was managing Cincinnati, Reds players recalled him giving impromptu batting tips to the opposition, unable to help himself. Biographers of Ted Williams cite the story that the young Williams spoke with the aging Hornsby about hitting. Hornsby's secret was simply this: "Wait for a good pitch to hit." That became Williams' creed and the creed of many who followed.

Hornsby died in 1963 of a heart attack after cataract surgery. He was buried in the Hornsby Bend cemetery east of Austin, Texas.

—Umpire Bill Klem, responding to complaints from a young pitcher who thought some of his pitches to Rogers Hornsby were strikes, though Klem had called them as balls.

Retrieved from https://www.newworldencyclopedia.org/p/index.php?title=Rogers_Hornsby&oldid=1091620
Categories:
Hidden category:
This page was last edited on 16 December 2022, at 02:42.
Content is available under Creative Commons Attribution/Share-Alike License; additional terms may apply. See Terms of Use for details.