Roger Brooke Taney (pronounced "Tawney") (March 17, 1777 – October 12, 1864) was the twelfth United States Attorney General. He also was the fifth Chief Justice of the United States, holding that office from 1836 until his death in 1864, and was the first Roman Catholic to hold that office. While serving at the head of the Supreme Court, Taney stuck by the maxim of state power over federal control except in regards to the paramount issue of slave owners' rights. Taney ruled that state laws preventing slave owners' from traveling into free territories to retain slaves were unconstitutional. He also ruled that Congress could not restrict the spread of slavery to the territories, a decision that drew widespread controversy. Many argued that Taney was a member of the Southern Slave Power Conspiracy bent on securing a larger national voice for his section. Some feared he would soon rule that slaves could be retained after travel to the free states, though he was never given the opportunity to hear such a case. Taney felt that blacks were inferior and that America's forefathers viewed them as such and had thus deemed them undeserving of equal rights or status. Personally, he had freed his own bondsmen and felt that the institution of slavery was a blemish on the U.S. political landscape, but in time he would come to view abolitionist attempts as Northern attacks on the South. Taney served as Chief Justice for three years of the Civil War. He came into conflict with President Lincoln after he ruled the use of habeas corpus by the president illegal and deemed it a tool of the Congress alone (though Lincoln would ignore his decision). Some extreme Republicans pushed for Taney's impeachment. Taney was a controversial figure during his lifetime and remains one in the field of historical research.

Unlike Marshall, who had supported a broad role for the federal government in the area of economic regulation, Taney and the other justices appointed by Jackson more often favored the power of the states. The Taney Court, among other things, overturned the Marshall Court's decision in the Dartmouth College Case (1819), which had limited the power of the states to regulate corporations, and reversed the Marshall Court's previous holding that states could not charter banks.

Taney and his colleagues did, however, depart from their support for state sovereignty in one area: State laws restricting the rights of slaveholders. In Prigg v. Pennsylvania (1842), the Court held that the Constitutional prohibition against state laws that would emancipate any "person held to service or labor in [another] state" barred Pennsylvania from punishing a Maryland man who had seized a former slave and her child, then had taken them back to Maryland without seeking an order from the Pennsylvania courts permitting the abduction. The Taney Court extended this rule ten years later in Moore v. Illinois (1852) to hold that "any state law or regulation which interrupts, impedes, limits, embarrasses, delays, or postpones the right of the owner to the immediate possession of the slave, and the immediate command of his service, is void." Five years later, Taney wrote the decision for the Court in the Dred Scott case that declared any restrictions imposed by Congress on the spread of slavery into the territories, such as those found in the Missouri Compromise, to be unconstitutional.

The Dred Scott decision was widely condemned at the time by opponents of slavery as an illegitimate use of judicial power. Abraham Lincoln and the Republican Party accused the Taney Court of carrying out the orders of the "slave power" and of conspiring with President James Buchanan to undo the Kansas-Nebraska Act. Current scholarship supports that second charge, as it appears that Buchanan put significant political pressure behind the scenes on Justice Robert Grier to obtain at least one vote from a justice from outside the South to support the Court's sweeping decision.

Taney's intemperate language only added to the fury of those who opposed the decision. As he explained the Court's ruling, African-Americans, free or slave, could not be citizens of any state, because the drafters of the Constitution had viewed them as "beings of an inferior order, and altogether unfit to associate with the white race, either in social or political relations, and so far inferior that they had no rights which the white man was bound to respect."

(The full context of Taney's statement:

"It is difficult at this day to realize the state of public opinion in regard to that unfortunate race which prevailed in the civilized and enlightened portions of the world at the time of the Declaration of Independence, and when the Constitution of the United States was framed and adopted; but the public history of every European nation displays it in a manner too plain to be mistaken. They had for more than a century before been regarded as beings of an inferior order, and altogether unfit to associate with the white race, either in social or political relations, and so far unfit that they had no rights which the white man was bound to respect"—from Taney's ruling.)

Author Tom Burnam commented that, "it seems unfair to quote the remark above out of a context which includes the phrase 'that unfortunate race,' etc."[1]

Taney's own attitudes toward slavery were more complex. Taney not only emancipated his own slaves, but gave pensions to those who were too old to work. In 1819, he defended a Methodist minister who had been indicted for inciting slave insurrections by denouncing slavery in a camp meeting. In his opening argument in that case, Taney condemned slavery as "a blot on our national character."

Taney's attitudes toward slavery, however, hardened over time. By the time he wrote his opinion in Dred Scott he labeled the opposition to slavery as "northern aggression," a popular phrase among Southerners. He evidently hoped that a Supreme Court decision declaring federal restrictions on slavery in the territories unconstitutional would put the issue beyond the realm of political debate. As it turned out, he was wrong, as his decision only served to galvanize Northern opposition to slavery while splitting the Democratic Party on sectional lines.

Many abolitionists—and some supporters of slavery—believed that Taney was prepared to rule that the states likewise had no power to bar slaveholders from bringing their property into free states and that state laws providing for the emancipation of slaves brought into their territory were likewise unconstitutional. A case, Lemmon v. New York, that presented that issue was slowly making its way to the Supreme Court in the years after the Dred Scott decision. The outbreak of the American Civil War denied Taney that opportunity, as the Commonwealth of Virginia seceded and no longer recognized the Court's authority.

Taney continued to trouble Lincoln during the three years he remained Chief Justice after the beginning of the war. After President Lincoln suspended the writ of habeas corpus in parts of Maryland, Taney ruled as Circuit Judge in Ex parte Merryman (1861) that only Congress had the power to take this action. Some scholars argue that Lincoln made an aborted attempt to arrest Taney himself in response to his habeas corpus decision, though the evidence is sparse, (the Taney Arrest Warrant controversy). Lincoln ignored the court's order and continued to arrest prisoners without the privilege of the writ, though Merryman was eventually released without charges. Some Radical Republicans in Congress even considered initiating impeachment charges against Taney.

Taney died during the final months of the American Civil War, on the same day that his home state of Maryland abolished slavery. 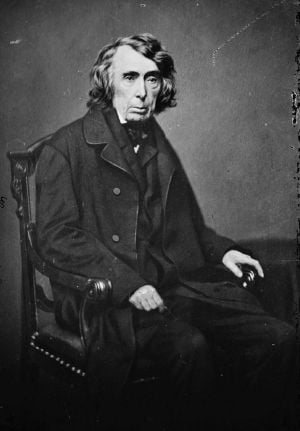 Taney remained a controversial figure—even when merely a statuary figure—after his death. In 1865 Congress rejected the proposal to commission a bust of Taney to be displayed with those of the four Chief Justices who preceded him. As Senator Charles Sumner of Massachusetts said:

I speak what cannot be denied when I declare that the opinion of the Chief Justice in the case of Dred Scott was more thoroughly abominable than anything of the kind in the history of courts. Judicial baseness reached its lowest point on that occasion. You have not forgotten that terrible decision where a most unrighteous judgment was sustained by a falsification of history. Of course, the Constitution of the United States and every principle of Liberty was falsified, but historical truth was falsified also….

Sumner had long exhibited an extreme and bitter dislike of the late Chief Justice. Upon hearing the news of Taney's passing the previous year, he wrote President Abraham Lincoln in celebration declaring that "Providence has given us a victory" in Taney's death. Even though Congress refused, in 1865, to commission a bust of Taney for display, it eventually did so when Taney's successor, Chief Justice Salmon Chase, died. In 1873, Congress apportioned funds for busts of both Taney and Chase to be displayed in the Capitol alongside the other chief justices.

Justice Benjamin Robbins Curtis, author of the dissent on Dred Scott, held his former colleague in high esteem despite their differences in that case. Writing in his own memoirs, Curtis described Taney:

He was indeed a great magistrate, and a man of singular purity of life and character. That there should have been one mistake in a judicial career so long, so exalted, and so useful is only proof of the imperfection of our nature. The reputation of Chief Justice Taney can afford to have anything known that he ever did and still leave a great fund of honor and praise to illustrate his name. If he had never done anything else that was high, heroic, and important, his noble vindication of the writ of habeas corpus, and of the dignity and authority of his office, against a rash minister of state, who, in the pride of a fancied executive power, came near to the commission of a great crime, will command the admiration and gratitude of every lover of constitutional liberty, so long as our institutions shall endure.

Modern legal scholars have tended to concur with Justice Curtis that, notwithstanding the Dred Scott decision and the furor surrounding it, which will forever be attached to his name, Taney was both an outstanding jurist and a competent judicial administrator.

It is important to note that Taney freed his slaves prior to the Dred Scott decision, and was personally opposed to the institution of slavery.

Taney County, Missouri, is named in his honor. There is a statue of Justice Taney prominently displayed on the grounds of the Maryland State House.[2]